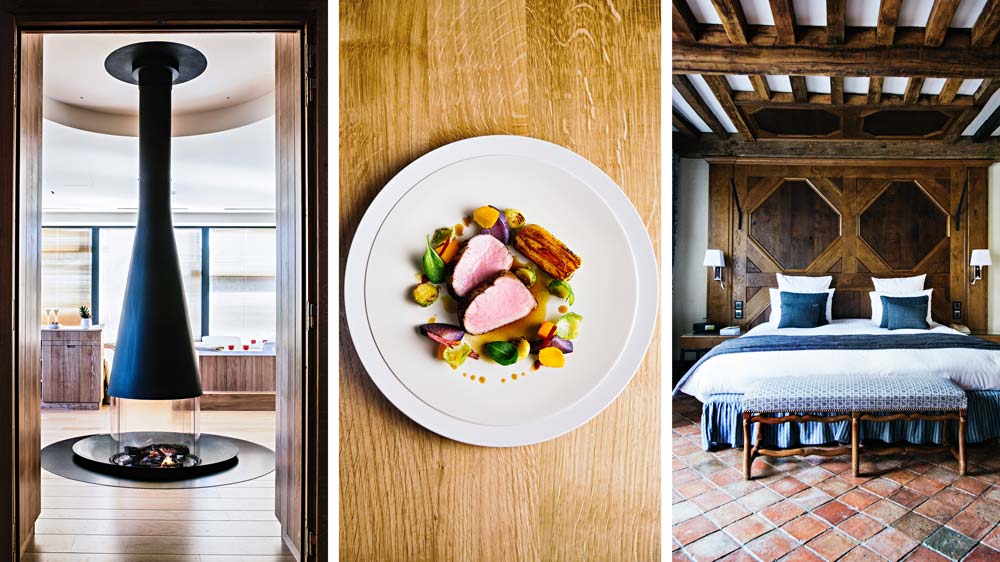 For nearly 30 years, Dominique Loiseau has been warmly greeting guests at the arched doorway of the five-star Burgundian retreat Le Relais Bernard Loiseau, never too busy to extend a personal welcome to weary travelers who have arrived in search of a respite in the countryside. “For me, empathy is an essential strength in this profession, putting yourself in the customer’s place and seeing what they need,” says Loiseau.

The wife of the late French chef Bernard Loiseau is a celebrity in French luxury hospitality. As president of the Bernard Loiseau Group, she also served as the first female vice president of Relais & Châteaux from 2005 until 2013, where she worked to help hotel managers develop the soul of an innkeeper, something her husband, she says, exemplified.

“It was a way to pay tribute to and represent all these women who work hard running their Relais & Châteaux establishments, often in the shadow of their husbands,” says Loiseau. Her widely felt influence in France’s hospitality world was recognized first with the Legion of Honor award by French President Nicolas Sarkozy in 2008, and in 2015 Les Grandes Tables Du Monde named her Best Restaurateur in France.

Loiseau’s innate sense of anticipating what travelers want even before they can express it has served her well as she expands the business, located three hours by car from Paris, and which she and her late husband established in 1990. This year, Loiseau charted a new course for Le Relais Bernard Loiseau as a true luxury wellness retreat, overseeing the completion of one of the most beautiful, state-of-the-art spas in the country.

The newly unveiled Villa Loiseau des Sens four-story spa is equipped with a multisensorial area with indoor pools, water bikes, and massage alcoves, an elegant health-food restaurant, and 10 treatment rooms where guests can enjoy everything from Moroccan gommage to intuitive massage. Designed by Spa Concept Monaco and the architect Claude Correia, the crown jewel is a 700-square-foot penthouse spa suite available for day bookings or overnight stays. It offers guests a balneotherapy bath and a hammam featuring dazzling Venetian tile made of glass and precious metal as well as views of the Auxois Mountains.

Loiseau likens Burgundy’s Morvan region to “a little Canada,” with green trees, mountains, and fresh air making it a fitting place, she says, for a spa retreat. The new modern glass-and-wood structure provides a striking contrast to the charming hotel, where guests still enjoy breakfast in a turn-of-the-century dining room surrounded by photos of the historic property’s caretakers.

It’s Loiseau’s commitment to the art of hospitality and the memory of her late husband that has allowed her longtime business to thrive and evolve. Born in Alsace, Loiseau spent an idyllic childhood in a small hamlet near Strasbourg. Much of her time was spent exploring her grandparent’s farm where she developed a passion for nature and wellness. She began reporting on spas and nutrition for the French newspaper L’Hôtellerie in 1985, and while covering an event, she met the young Michelin-starred chef Bernard Loiseau who had taken over management of La Côte d’Or in Saulieu. “He couldn’t keep his eyes off me, I thought he had mistaken me for someone else,” she recalls.

Five years later she joined Bernard at the auberge on historic Route 6. Located on the way to Cannes, a who’s who of celebrities from Elizabeth Taylor to John D. Rockefeller had stayed and dined there during the 20th century. With Dominique working beside him, Bernard earned his third Michelin star in 1991. The couple began making major improvements to continue to impress their luxury clientele, including adding additional guestrooms, a larger restaurant kitchen and dining room, and a small spa.

La Côte d’Or became the first Relais & Châteaux property with a Michelin three-star restaurant to offer guests a full spa experience. Bernard became the most famous chef in France, known for his lighter French cuisine that typically showcased three main flavors such as frog legs with garlic and parsley, but it was consuming work. “Bernard sacrificed his hobbies. All his life was devoted to this place,” says Loiseau.

When Bernard passed away in 2003, Dominique set to work preserving his legacy and keeping the hotel and restaurant, which employs a staff of about 100, afloat. “I didn’t think twice,” she recalls. “It felt like a mission to me, to carry out Bernard’s work for our children, for his team, and for the customers who worshipped him.”

Shortly after his passing, Dominique became president of the Bernard Loiseau Group. She renamed La Cote d’Or Le Relais Bernard Loiseau and she put in place strict cost-control measures that would help them weather the eventual financial crisis. Several years later, she began expanding the company to include gastronomic restaurants in Beaune, Paris, and Dijon (each would go on to earn its own Michelin star) as well as a wine bar.

“I’m very proud that we kept it,” says Dominique. “Making customers happy and meeting their needs is, to my mind, the greatest achievement.”