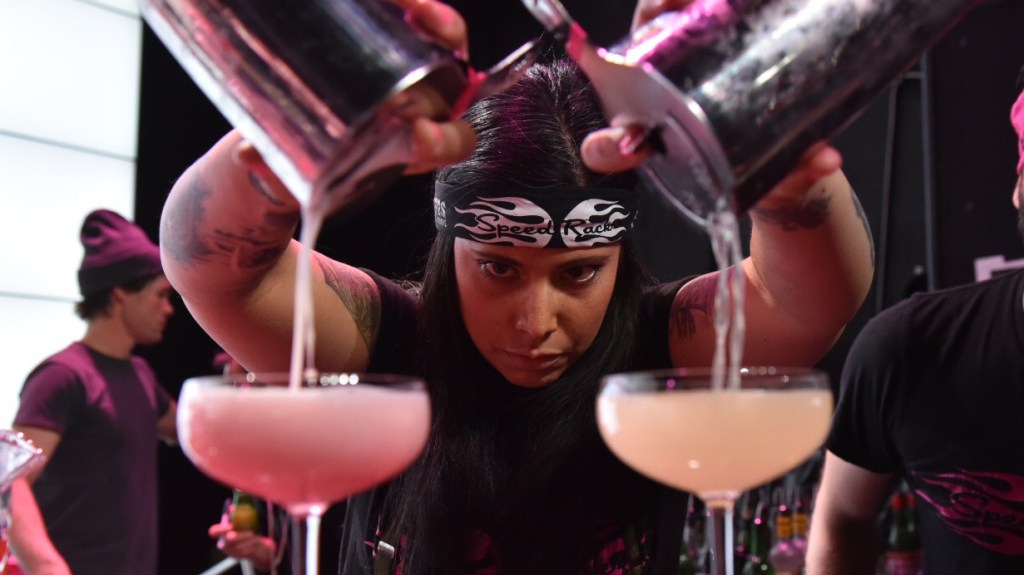 Speed Rack has been called the roller derby of the cocktail world—and for good reason. The all-female bartending competition is physically intense, with jiggers flipping, cocktail tins furiously shaking, and contenders sweating it out until the last second to mix the perfect concoction. Lynnette Marrero, beverage director at the Llama Inn in Brooklyn, and Ivy Mix, owner of Leyenda in Brooklyn, founded the competition in 2011 as a way to increase women’s profiles in the cocktail world. The two women met through the organization Ladies United for the Preservation of Endangered Cocktails (LUPEC). Mix had just returned to New York after bartending across Latin America, but was having a hard time finding a job in the city. Bar owners kept suggesting she become a waitress. The duo decided to do something about it.

“I started seeing that there were a lot of really talented women bartenders who people didn’t know as well as the prominent male bartenders,” Marrero says. “So, I organized events where the women would bartend and we would raise money for women’s charities.”Marrero and Mix soon spun their idea off into a female-only competition—a surprisingly subversive move at a time when the role of the head bartender was almost always filled by a bearded and suspendered man. The first event included cocktail-industry titans like Julie Reiner, Dale DeGroff, and Audrey Saunders.

“There was this really fantastic energy in the room,” Marrero says. “Women were being pushed to their limits, competing at a very high level, and being judged by the pioneers of the rebirth of the cocktail industry.” Now in its seventh year, Speed Rack continues to celebrate women behind the bar. The competition’s national tour visited seven cities in 2018; the finals will be held in Chicago on May 8, the night after the James Beard Awards. “In many ways, we’ve succeeded in our original mission,” Marrero says. “We’ve arrived.”

Indeed, there has been a dramatic shift in the role of women bartenders in the past few years—and Speed Rack has been the springboard for more than a few of them. New York’s Lacy Hawkins, who won Speed Rack in 2016, is now the national brand ambassador for Monkey 47 Gin. And Alex Jump, who won the Southwest title in 2017, was named lead bartender at Death & Co.’s Denver location, which opens later this year.

“The industry has evolved,” Mix says. “After all these years, we feel a real sense of sorority and celebration that is showcased at our events.” Drawing on that strong sorority are Speed Rack’s fundraising efforts. To date, the competition has donated $750,000 to breast cancer charities like SHARE Cancer Support. The organization hopes to reach $1 million in donations by the end of 2018.

Looking ahead, Mix and Marrero hope to use Speed Rack’s influence to promote female ownership within the bar industry. “We’ve realized that we have this wonderfully engaged network of women, and we can give them more resources and tools to succeed,” Marrero says. To that end, the duo has also developed the Sisterhood Project, a collaborative organization with Del Maguey mezcal and Fords Gin that offers members everything from workshops on financial planning to conversations about work-life balance. At a recent meeting, a crisis counselor lead discussions on sexual assault in the workplace, a topic the service industry as a whole is beginning to publicly reckon with.

“Speed Rack is particularly necessary, more so than ever, as part of the ongoing fight for equality—and for those affected by breast cancer,” Mix says. “We will never cease to support these incredibly important issues.”