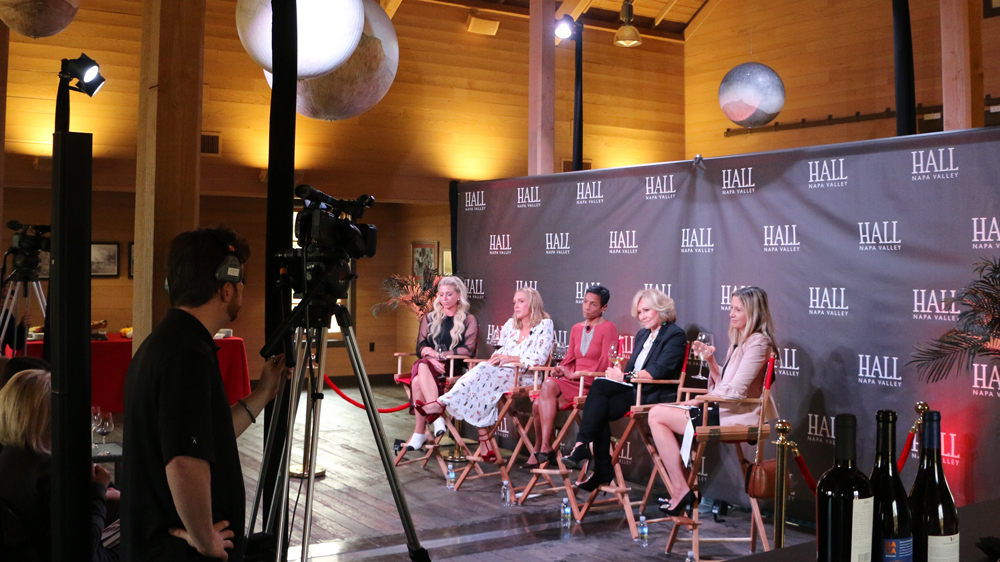 When actress Mira Sorvino began working with Robert Redford on the 1994 film Quiz Show, and the shooting lumbered forward with a dozen or more takes a scene, she assumed she was failing miserably. When she took her fears to her father, actor Paul Sorvino, his advice on how to move forward creatively was succinct: “Just take a big, flying leap at it!”

Seizing opportunities—and particularly those unique to women in 2018—was a theme that emerged with force in a roundtable conversation Sorvino (the younger) moderated on November 9 at Hall Wines in northern Napa Valley. Her panel included Kathryn Walt Hall, former U.S. Ambassador to Austria and now vintner of Hall Family Wines; actress Annie Starke, whose recent credits include The Wife; LeShelle May, Emmy Award–winning computer engineer who was material in launching CNN.com; and LeeAnn Sauter, founder and CEO of the Maris Collective family of luxury boutiques. Through personal stories and opinions, these powerful professionals painted a snapshot in time of women’s critical engagement in society today, describing, in their view, the most pressing concerns on the journey of the gender going forward.

Ironically, all cited their fathers as motivating figures in their own ability to grasp opportunity. As Sauter puts it, “What you’re taught when you’re young is very powerful.” The lesson in her case came down to a choice in a drugstore. Her father, a pharmacist, let her take an occasional prize home from one of his shops. When Sauter claimed a nurse’s kit one day, she recalls her father saying, “But there’s a doctor’s kit, too. Why didn’t you choose it?” Now she knows that to be a universal moment. The nurse’s kit was pink, the doctor’s kit brown, a message her father rejected.

“Many women are alone in their industries. The sadness is in isolation.

For us, paying it forward—empowerment—means increasing our numbers.” —LeShelle May

Female mentors who communicate a better message—“it’s a struggle, but you can keep moving forward”—play heavily in the success these women envision for their peers. Kathryn Walt Hall reports that when she was a law student at UC Hastings in San Francisco, the ratio of men to women was in the ballpark of 1,000 to 20. “If you waited for a female mentor to come along,” she says wryly, “you’d be waiting a long time.”

“At CNN,” says LeShelle May, “I didn’t know to ask for a mentor.” Pursuing electrical engineering in the 1980s, she was on a “man’s path”—technical, nerdy. What she did have was a girls’ club that meets to this day, and has since emerged as a fierce advocate of hiring and promoting more women. “Many women are alone in their industries,” she says. “The sadness is in isolation. For us, paying it forward—empowerment—means increasing our numbers.” May is proud of her “legacy of women,” especially, she says, new millennial hires in The Situation Room with Wolf Blitzer.

Through an hour of anecdotes, a uniquely feminine portrait emerges; there is great capacity to move forward into opportunity even while being acutely aware of the vulnerability in it. Running for office, for instance, says Hall (twice a losing candidate), is brutal. “Everything is torn apart. It’s not just your ideas, it’s also about how you comb your hair.”

Annie Starke described vulnerabilities both professional and personal. In signing on for The Wife—after 15 women had already been tested—she felt like she was “putting herself on the chopping block,” as the role was an homage to her grandmother, who as a young woman had been a chemist for General Electric. At one point, according to Starke, she found she had even worked on the secretive nuclear Manhattan Project. With her first pregnancy, though, her own career path dried up, and she became the pillar behind the husband, a role her generation played so well.

It’s telling that none of these women consider vulnerability paralyzing. In fact, in the #MeToo and Time’s Up era (Sorvino is herself a victim of sexual harassment, of the Harvey Weinstein variety), and after an election that saw record numbers of women (and record-breaking diversity in those numbers), the panel was unanimously excited about the power women have today to take their place at the table—to speak and be heard. Says Sauter, “We are amazing thinkers, and we have a voice. It’s a time of change in every industry right now, and women are open to change. We can come up with amazing ways to change the world.” Which is her way of saying, “Just take a big, flying leap at it!”