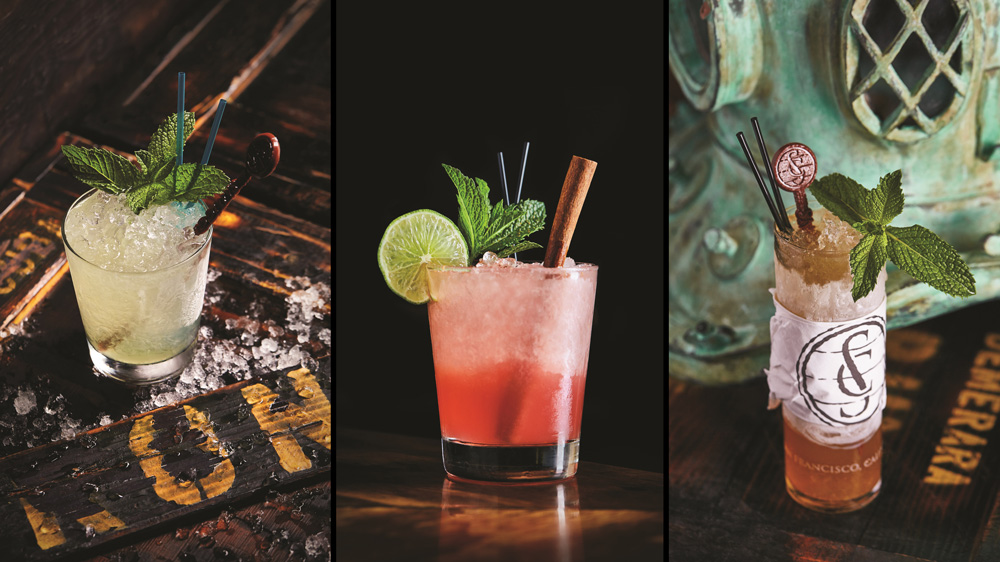 “Some people think of tiki as ironic,” Martin Cate says. “But for those who are passionate, we know it as an art.”

Cate is the modern-day Trader Vic—the man who is credited with bringing the bygone bartending fad of tiki into the 21st century. More than a decade ago, he reignited America’s thirst for rum cocktails and tiny umbrellas by opening Forbidden Island Tiki Lounge in Alameda, Calif., and three years after that, Smuggler’s Cove in San Francisco. But his award-winning bars, and the trend they’ve spawned in the 10-plus years since, are more than simple nostalgia—they’re recapturing something that the world needs right now.

“Tiki in its original heyday wasn’t only a bar trend,” Cate says. “It was an American obsession [that served as] a counterpoint to the relentless progress and anxiety of the 1950s. I think today we have a lot of the same feelings. It’s hard to disconnect from phones—to get away from the modern glass and steel. Tiki provides that exact escape.”

“Some people think of tiki as ironic,” Martin Cate says.

“But for those who are passionate, we know it as an art.”

The original tiki bars of the early and mid-20th century (Don the Beachcomber and Trader Vic’s the most prominent among them) were indeed thought of as escapes. Sven Kirsten, author of The Book of Tiki and Tiki Modern, called them “emotional bomb shelters of the atomic age.” Now, in this time of constant noise—from the tweets and scandals to the 24/7 political shock and awe—is it possible that tiki is once again the answer? Given the number of new establishments soothing its patrons with Fog Cutters, Zombies, and Scorpions (all names of beloved tiki drinks), we think so.

Kevin Beary of Three Dots and a Dash.  Anjali Pinto

Still, there’s more to modern-day tiki than just re-creating the cocktails of the past. Mixologists like Cate and Kevin Beary of Chicago’s Three Dots and a Dash are setting a new standard for tiki, searching old recipe books and attending conferences like Tiki Kon to create new cocktails that push the tiki envelope further.

“Everything we do here is time-consuming. All our juice is cold-pressed, and we produce 40 to 80 gallons per day,” Beary says. “Back in tiki’s heyday, it was probably even harder. But when the gig got easy, things went terribly wrong. The invention of sour mix is truly when tiki went off the rails. This modern movement has just come full circle.”

For evidence of the modern mastery of tiki, Beary points to his long-researched banana daiquiri, which uses macerated fresh banana, lime juice, and a centrifuge to create a true banana—and not at all artificial—taste. “The basis of tiki was—and is—about using the best of everything,” he explains. “Today, that means applying modern techniques to old drinks.”

Other tiki purists echo Beary’s sentiment of approaching tiki with a combination of old-school loyalty and new-school connoisseurship. Bartender Pete Stanton—who insists on having at least one tiki cocktail on the menu at the Langham New York’s Bar Fiori—regularly experiments with traditional tiki ingredients like pineapple gomme to create new flavor profiles. “Tiki drinks are like making a curry. You need an understanding of how your ingredients interact,” Stanton, who also teaches a tiki class at Bar Fiori, says. “There are a million flavors playing at once––more than you would otherwise have in cocktails. There’s sweet, sour, smoke, and spice.”

Bartender Brian Miller at the Polynesian.

Still, the escapist nature of tiki is in more than just its flavors—it’s in its classic aesthetic, too. For Cate, that means eschewing classic tiki kitsch—a word the mixologist despises—and reviving the thoughtful design arch that permeated the original movement. At Smuggler’s Cove, for instance, you feel you’re in the belly of an ancient ship, with dock lines, barrels, and nets strung overhead. A similar style will reign at the Polynesian, a soon-to-open tiki bar by the team behind such Manhattan hot spots as Dirty French and the Pool. There, rum expert Brian Miller will mix cocktails like the Damned to the Depths (made with two rums and absinthe) among tiki-centric murals and teakwood floors. One look at the new space, and you can’t help but forget your worries and your cares. After all, when you’re sipping rum from a giant clamshell, surrounded by bamboo and lava rock, it’s easy to forget about the latest breaking news, right? Cheers to that.

Phoenix, a Town Big Enough for Super Bowl LVII and the WM Open