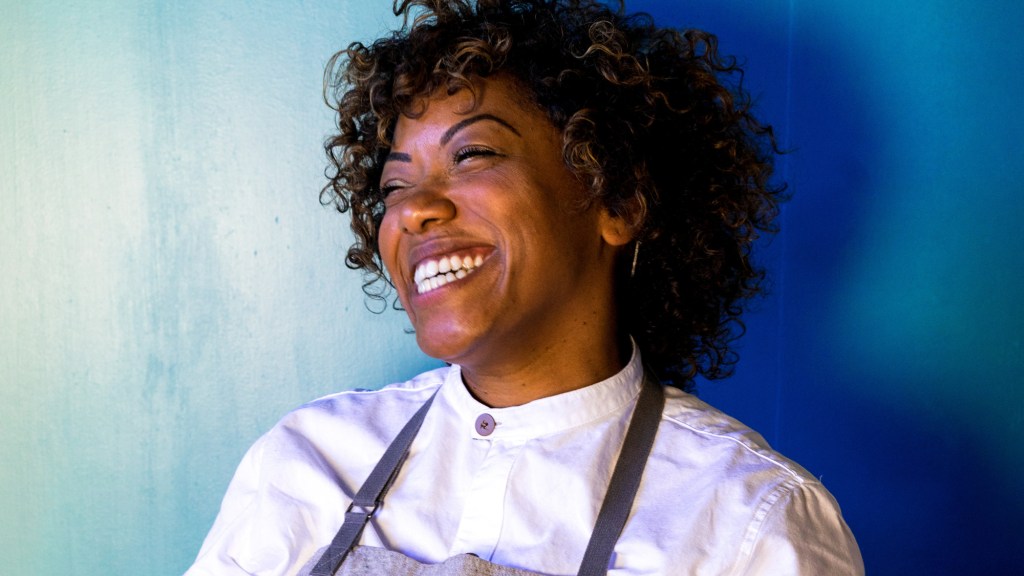 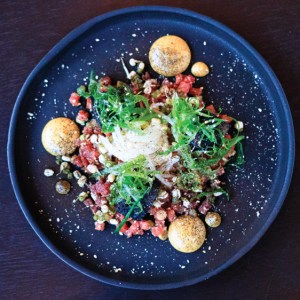 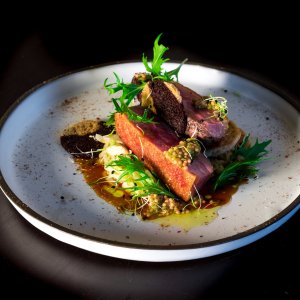 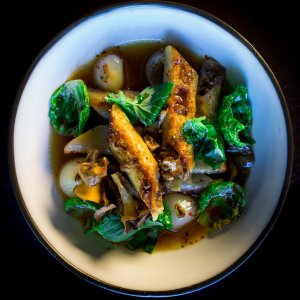 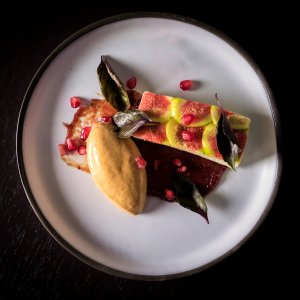 “My first job was on the same street 16 years ago,” Nyesha Arrington says while sitting in her restaurant Native, craning her head as if trying to look down Santa Monica Boulevard toward her old gig. Cooking at the dearly departed restaurant Jiraffe, she kick-started a decade-and-a-half culinary journey that eventually sent her away from Los Angeles, only to have the gravitational pull of her hometown bring her back.

Now, not only is she cooking where she grew up, at Native she’s creating what she calls “Angeleno cuisine,” a delicious reflection of a changing city and food scene.

Getting her start in cooking at the Art Institute in Santa Monica, Arrington began her career during a transitional time in the city’s culinary culture. Los Angeles had its stalwarts—it’s the town that gave us Wolfgang Puck, after all—but it was far from becoming the culinary boomtown it is today. The culture in the kitchen was quite different back then, too.

“That time was the last of the pan-throwing, yell-y kitchens. We were like the army. Whoever had the sharpest knife, worked the fastest, was the most efficient was the leader,” Arrington says. “I fell in love with it. The first day I worked in a kitchen, I was standing at the pass and plating something, heart racing, and a plate—one worth $50 before you even put food on it—flew past my face. I was scared and happy at the same time. I had just read Anthony Bourdain’s Kitchen Confidential, and I was like, ‘This is the shit people write about! I want to do this forever.'”

Eventually, she found her way to Melisse, a two-Michelin-star restaurant located just a few blocks from Native, where she went through a 2-year boot camp in fine dining. “I cut my teeth there,” Arrington says. “It was super challenging learning how to butcher every animal, make every classic sauce, cooking game birds and all these things I’d never worked with, but with a California farmer’s-market-driven spin.”

The intervening years would see her working at other restaurants around Santa Monica as well as on Joël Robuchon’s kitchen brigade in Las Vegas and in a resort in the Virgin Islands, where she had a stint running a restaurant. She even spent a season competing on Top Chef. Still, her heart and culinary style remained firmly rooted in her hometown.

A few years ago, the native Angeleno opened her first restaurant, Leona, in Venice. “I called it ‘progressive California cuisine,’” she says. “It’s a mix of savory and sweet. It’s light and bright, and our cooking is seasonal and produce-driven.” Accolades poured in, including winning chef of the year from Eater L.A. in 2015. But 18 months after opening, she left after irreconcilable differences with her partners, and even now sitting inside of her new restaurant, the sting of the divorce is still present.

Like some of her fellow Santa Monicans, Arrington conveys a touch of hippie-ness when she says with a relaxed, broad smile that, “I tell my cooks we are stewards of the land. We are simply here to celebrate what Mother Nature is giving us today.” But when asked about leaving Leona, for the first time, her sunny demeanor faded. She paused for a moment before saying, “That was my heart and soul; I didn’t want to leave. Our visions didn’t align, and it became a little diluted. I had to make the very difficult decision to part.”

Her mood quickly turned ebullient again when she began discussing Native. There, she’s taken what she loved most about Leona and focuses it even more on telling the story of Los Angeles through food.

“There’s a multicultural aspect to L.A.,” Arrington says. “I draw inspiration from different cultures and neighborhoods.”

With experience in French fine dining, pulling flavors from the melting pot of L.A. and sourcing from the rich bounty of Santa Monica’s farmer’s market a few blocks away, it would be easy for Arrington to lose the thread in the cuisine Native serves. But as she builds her market-inspired menus, she has a guiding philosophy: “In every dish, there are three elements,” she says. “There’s going to be something seasonal, something culturally inspired, and it has to have nostalgia to it—it feels familiar.”

That philosophy expresses itself in dishes such as duck breast influenced by her love of Reuben sandwiches from Langer’s Deli, a twist on a French tartare that has Maui onions and a Korean mustard, and something even more personal—an outstanding short-rib dumpling inspired by first falling in love with cooking beside her Korean grandmother.

“It’s been cool to self-reflect because I always wanted to be a chef, even when I was 9,” Arrington says. “My dad reminded me about it. He told me, ‘When you were a kid, you used to play restaurant and called it A+ Good Restaurant, and you said you wanted a different theme every day. Look around, Nyesha. You created it.'”