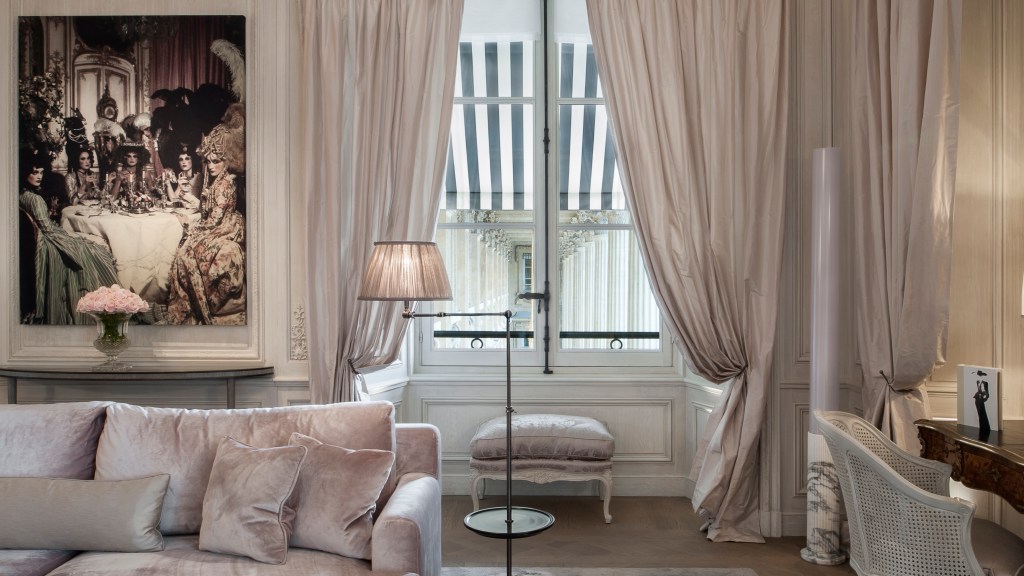 In 1937, Coco Chanel booked a suite at the Ritz Paris hotel, set near her boutique on the Rue Cambon—and felt so at home there, she went on to stay for 34 years, slowly transforming the room with her favorite furnishings and personal decorative touches. Now a listed historic monument, the Suite Imperial became iconic for the novelty of the relationships between a fashion designer and the luxury hotel—but today, a connection between the two realms seems natural. After all, both entities are inspired by beauty, driven by the bespoke, and dedicated to the details.

“In hospitality design, as in an haute-couture collection, every stage from design to production to the runway counts; every stitch has a purpose, every texture and color elicits an emotion, every detail matters, and every element is perfected,” says João M. Rocco, vice president of luxury brand management for the Sofitel group, whose SO/ Sofitel brand partners with a different fashion designer for each of its properties, from Kenzo Takada in Mauritius and Karl Lagerfeld in Singapore to Viktor & Rolf in Berlin. Also part of the appeal is the fact that, unlike the recent trend toward a more muted, “residential” style of hotel interior design, working with a fashion-trained eye adds a more distinctive flair to the property, and allows the hotel to set itself apart. “Partnering with a fashion designer [celebrates] creativity and individuality,” adds Rocco, and enables a hotel “to express its own personality”—a necessity in this age of Instagram hotel stars.

The Sofitel group is not the only brand that has caught onto this idea: From a classic Caribbean resort with ties to an American style icon to a Majorcan favorite with a just-launched fashion-tied suite, here are six hotels where guests sleep in fashionista style.

Since 1953, Jamaica’s Round Hill Hotel and Villas has been a discreet second-home hideaway for American socialites, artists, and other boldface names. In 1985, designer Ralph Lauren joined the mix, purchasing first a 25-acre estate and then, a decade later, a second home on the beach. Lauren and his family quickly became fixtures at the property, and the breezy, nature-inspired style of his homes was soon adopted by other villa owners—and then by the hotel itself, beginning with the bar in the 1990s, and continuing up to the room renovations completed in 2017. Envisioned by Lauren and his team, crafted with Ralph Lauren fabrics and fixtures, and featuring furnishings designed by Lauren (and made by Jamaican artisans), the spaces’ light, unfussy feel—think white walls, polished woods, and shingled roofs—is part British Campaign, part vintage Jamaica. “Lauren is a master at picking the best of different periods and putting them together in an aspirational way, while honoring the architectural language, and letting nature be the focus,” says Josef Forstmayr, managing director of Round Hill. “The romanticism of a beautiful lifestyle, and that tropical ease—he lives it himself, so it’s not put on or forced. It’s not about following a trend or looking like the next Bali. It’s timeless.”

Following a six-month renovation, Florence’s historic Hotel Savoy reopened this past April with all-new interiors—and a new partnership between two venerable Italian families. Though Olga Polizzi (director of design for Rocco Forte Hotels, and sister of hotelier Sir Rocco Forte) and Laudomia Pucci (image director of the Emilio Pucci fashion house, and daughter of its founder) have known each other for years, this is the first time the two brands have worked together, and the first time Pucci has branched out into hospitality. To start, the fashion house created an exclusive silk scarf—in bright pink and turquoise blue versions—inspired by the hotel’s Piazza della Repubblica setting and the nearby Brunelleschi Duomo. The scarves are now encased in glass tabletops in the terrace restaurant, adding pops of colors to the space. Similarly bright Pucci fabrics and patterns—including the iconic “Lamborghini” print from the archives—accent the lobby and other public spaces via pillow covers, rugs, and furniture upholstery.

Set in Mallorca’s art hub of Deia, Belmond La Residencia’s decor has long incorporated the work of area painters and sculptors—but for its newest Suite 67, created by British fashion designer Matthew Williamson, the inspiration was the village itself. Deia is “one of the places where I feel most creative, and it was just such a natural and wonderful starting point for the whole hotel-suite concept,” explains Williamson, who has infused the one-bedroom suite with his signature bold colors, rich textures, and playfully modern flair (seen in details like hand-drawn flora and fauna patterns). To craft the private retreat, the designer personally selected the furnishings and decorative items with an eye to blending contemporary and vintage elements. From the handmade Portuguese ceramic lamps with block-print shades to the hand-painted his-and-her wardrobes, the framed John Derian botanical artwork to the ostrich feather lamp, the vintage glassware to the velvet rugs-—plus bespoke wallpaper and upholstery by Williamson himself—the result is one of carefree charm.

Designer Karl Lagerfeld has put his imprint on hotels before (the pool at the Hotel Metropole in Monaco is among the more notable examples), but as a connoisseur of 18th-century style, the chance to participate in the renovation of the historic Hôtel de Crillon, A Rosewood Hotel—once a private nobleman’s mansion where Marie Antoinette herself took piano lessons—made perfect sense. Monsieur Lagerfeld’s mark can be seen in two fourth-floor suites—the Suite Couture and Suite Concorde, separately, or Les Grands Appartements together—which look out onto the Place de la Concorde and monuments like the Eiffel Tower and Musée d’Orsay. To convey his modern-meets-18th-century theme, Lagerfeld managed every detail, from designing the furnishings and composing the color schemes to selecting the patterned marble for the bathrooms and the tongue-in-cheek artwork for the walls.

Among fashion folk who’ve partnered with hotels, Christian Lacroix is undoubtedly the most prolific, with several hotels in Paris alone bearing his glamourous touch. One such spot is the 25-room Hôtel du Continent in the 1st arrondissement, a three-star hotel that punches above its weight thanks to Lacroix’s fantastical interiors. The theme here is a trip around the world, conveyed through details like vintage maps and globes, exotic objets, vibrant fabrics and textiles, and bold wallpaper emblazoned with destination-themed images. Each floor represents a different continent or region, including the Arctic, with rooms boasting a related design, but public spaces are a globe-spinning free-for-all—and, like Lacroix’s haute couture, a vibrant visual feast.

Travel has long served as an inspiration for Diane von Furstenberg, so when it came time to create her first cruise collection in 2008, the designer used her London home-away-from-home—Claridge’s, where she’s been staying since the 1970s—as her muse. In 2015, she returned the favor by designing several aspects of the hotel, including the two-bedroom Grand Piano Suite, where the building’s original art deco bones frame a whirlwind of global design motifs. The suite’s living room is particularly bold, with large-scale Chinese florals and animal patterns; Murano glasswork, DVF-brand textiles, curtains, upholstery (in vibrant ikat or striped patterns), Von Furstenberg–designed wool and silk rugs, and boxes handmade in Bali can be found throughout. The designer also looked to her adventures to create four signature pieces of furniture that adorn several guestrooms—including a dressing table inspired by trips to Italy and a cocktail bar that evokes Middle Eastern jewelry boxes—while travel photos taken by Von Furstenberg are also displayed throughout the hotel.

Kevin Spacey Heads to Court on Thursday, in First of Four #MeToo Trials This Month