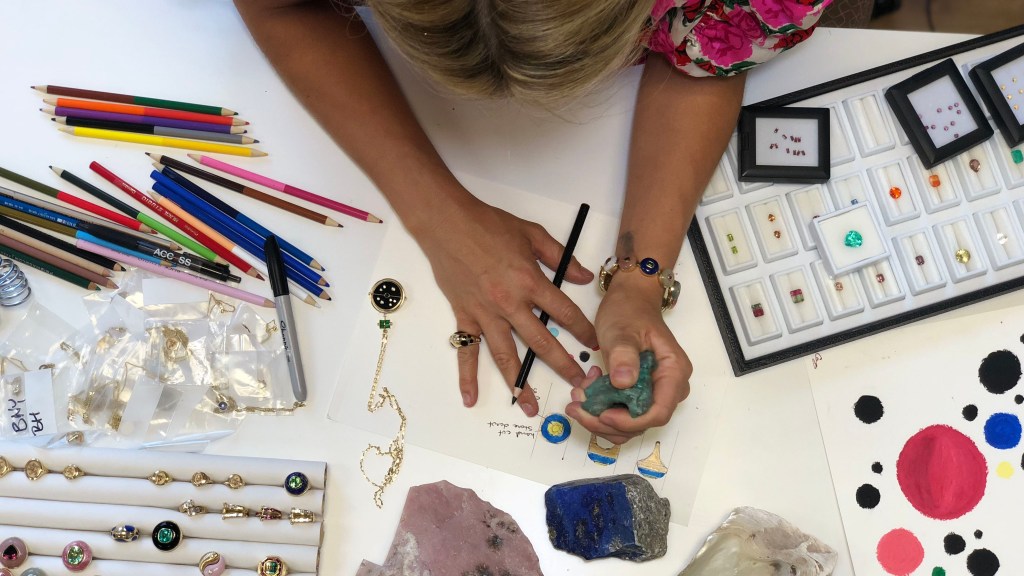 When Polly Wales, a classically trained jeweler from London, decided to pack up and move her entire workshop from the UK to Los Angeles in 2015, she and her partner, James, had only been to the city once before. Lured by the promise of sunshine and the city’s relative affordability (compared to New York, at any rate), they made the leap with a team of nearly a dozen workers in tow.

“We found a 3,000-square-foot studio space in one of the oldest buildings in the jewelry district,” says Wales, who insists on making everything in-house as opposed to outsourcing her manufacturing to one of the district’s myriad workshops, like most designers.

“There have been bumps in the road since then,” she acknowledges. “Not everybody stayed. There are six of us left from that initial UK group. And now we have a group of 13 people. We’ve grown and refined what we do. I think the work has changed since we moved here—it’s gotten bigger and bolder and brighter. And we’ve pretty much doubled the business.”

Contrary to reports of its demise, the jewelry district in downtown LA is seeing an influx of female-led jewelry-design firms that are rejuvenating the way business is done in the century-old neighborhood. Concentrated near Pershing Square in downtown LA’s historic core, the district is home to thousands of retail, wholesale, and manufacturing businesses, many of which fell on hard times in the wake of the 2008 financial crisis.

Now, however, Los Angeles–based jewelers who primarily manufacture downtown—a list of in-demand makers that, in addition to Wales, includes ARK Fine Jewelry, Retrouvaí, Sarah Hendler, Established, Brooke Gregson, Sylvia & Cie., Andrea Fohrman, Anita Ko, and Anna Sheffield, a New York City transplant who recently opened a boutique on trendy Melrose Avenue—are having a moment, as is the city’s fashion scene, which has witnessed an incursion of talent from New York and Paris in recent years. By all accounts, the energy in the district reflects the growing buzz.

“There’s a feeling of something happening here, with creativity and the different cultures and the rebuilding of downtown and the restaurants,” says Ann Korman, who founded her brand, ARK Fine Jewelry, in 2016 after getting her start making jewelry in India.

Korman, who moved to LA from New York City in 1996, had never spent much time downtown before she started her business. Initially, she was stymied by the jewelry district’s culture of secrecy. “People don’t like to tell you where they’re making anything,” she says. “Somebody told me to just walk into every single building and every single shop and learn what they do and that’s what I did.”

Pounding the pavement paid off. Korman found a large factory on Olive Street owned by a local Armenian family that now manufactures her 18-karat-gold and gemstone line. And even though it would be less expensive to have her designs produced overseas, she wouldn’t have it any other way. “I live on the Westside of LA, but when I drive downtown there’s an aliveness there,” she says.

Retrouvaí founder Kirsty Stone shares Korman’s affinity for the area. She has worked with a small family-run workshop in downtown LA since 2015 to produce the signet rings and gemstone pendants that are a signature of her up-and-coming brand. As her business ramped up a year ago, she realized she needed to take an office in the same building as the workshop to keep an eye on her production.

Even though she dreams of one day owning her own production facility, Stone—who currently runs the business with her husband and an assistant—is content to maintain her ties with the workshop. “My next step is having dedicated people inside their business so I guarantee a certain amount of revenue to them,” she says.

But Stone and her fellow designers are doing more than simply generating income for LA’s bench jewelers. They’re also reintroducing them to styles and techniques that many of the district’s more traditional jewelers abandoned decades ago. “We’re ordering chain from catalogs—and they’re like, ‘Let me see if I have some in the safe from the ’90s,’” Stone says. “Things are coming back around in terms of techniques.”

“I feel like I’m working really hard down here,” Stone concludes. “When I see older people who run businesses go home at 5 o’clock, I’m still running. That’s mid-afternoon for me.”