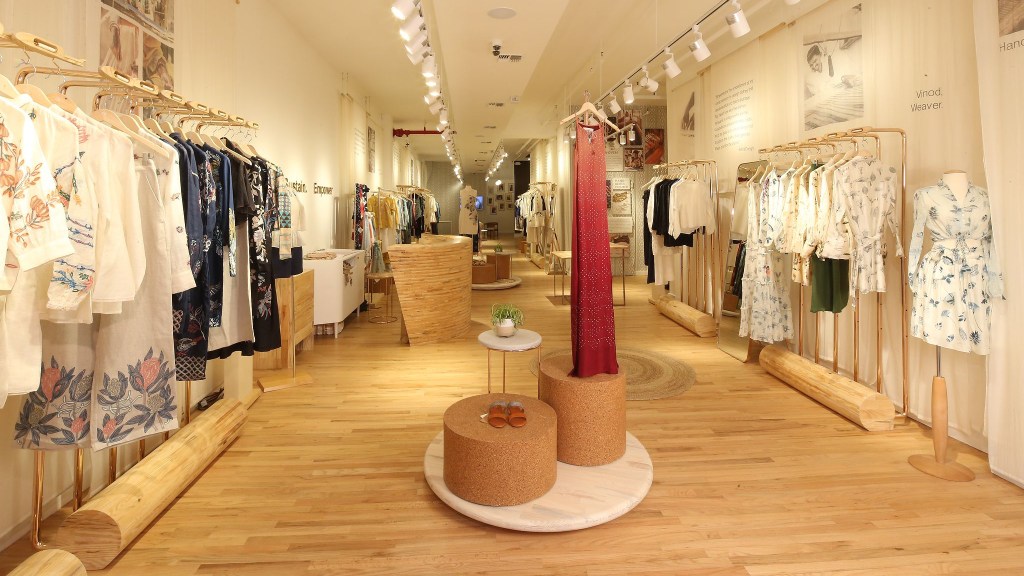 When Indian designer Anita Dongre opened a new flagship boutique in New York City’s SoHo neighborhood last May, there were two special guests that stood out amid the packed launch party brimming with celebrities, socialites, and models: Gauriben and Sakhiben, two women from the Bakutra village in the state of Gujarat. “I’m so happy to be here,” Gauriben told me in Hindi, as the city’s who’s-who congregated around canapés of dhokla and listened to a tabla player add his own flair to tunes being played by a DJ. “She’s done so much for us.”

As one of India’s preeminent designers, Dongre has dressed everyone from the Bollywood elite to English royalty; when Kate Middleton donned one of her dresses during a trip to India in 2016, her website crashed as the whole world rushed to look her up. Dongre has gradually amassed a cult following over the course of 25 years, for her main eponymous label along with Anita Dongre Bridal, and for breezy western wear and the youthful Global Desi. Three years ago, she launched Grassroot, a sustainable label that highlights the best of Indian handicrafts through collaborations with rural women across the country. That’s when she first teamed up with Gauriben and the NGO Self-Employed Women’s Association, which provides employment for women in their own homes. “I had told her, ‘We will take your craft global and make sure that women in the West will appreciate the beautiful work you do. I will open a store in New York,’” Dongre remembers promising her at the time. “I said it in jest, and three-and-a-half years later I opened and she was there.”

The Grassroot label brings to the forefront crafts that have thrived for centuries and empowers women to earn livings for themselves using these ancient traditions. Hand-block painting from Rajasthan, handweaving from Uttar Pradesh, and hand embroidery from Gujarat—the kind done by Gauriben and Sakhiben—are a common thread across her collections. “Anything that’s done purely by hand and primarily by women,” says Dongre. “It’s really women who are leading the change in our country.”

And, of course, while Grassroot’s dreamy, ethereal dresses, tops, and pants are eye-catchers—I received more compliments than I can count for the demure Niru dress I wore for the opening—Grassroot is about much more than pretty clothes: Empowering women through fashion has been a driving principle for Dongre from the beginning. “I’m a firm believer [in addressing the] issues that face India,” she says. “One is that employment must go back to the villages. Second is empowering women. And the third is, I love design. I’m combining all that I’ve always wanted to do and using design as a change.” Grassroot is a true labor of love, with small-batch production that doesn’t necessarily make much economic sense in Dongre’s business empire. “It’s the most challenging label I work on,” she says. And yet she continues to nurture it.

“My first collection was completely hand-painted and block-printed, and I’m still doing the same today—the same craft, with designs that are relevant today,” she says. “That’s the beauty about Indian crafts: They’re timeless, they’re beautiful, and as a designer I feel very fortunate to be born and brought up in a country that has such a rich textile tradition—you can never be short of inspiration in this country.”