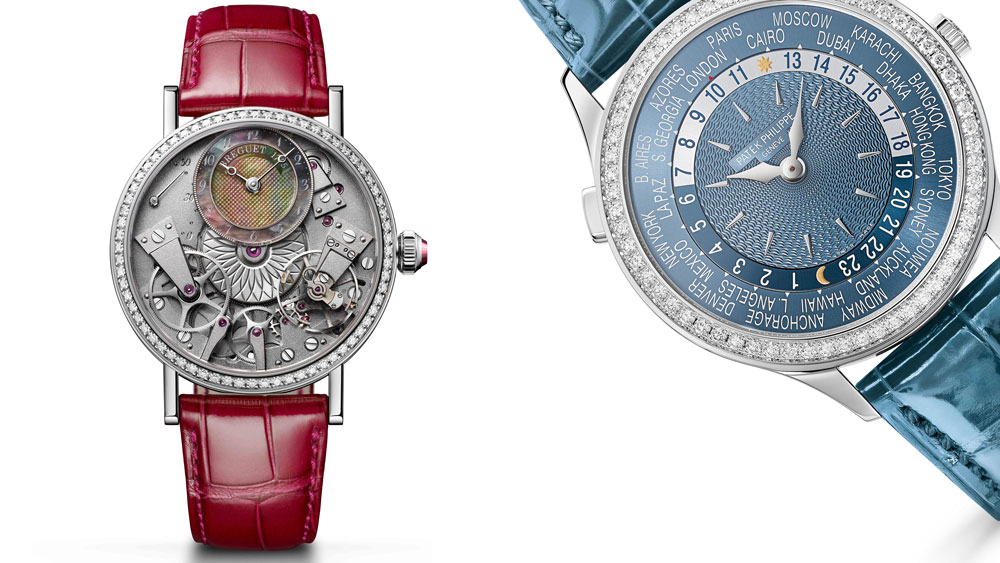 Inside the Lowell hotel’s penthouse suite on Manhattan’s Upper East Side, Patek Philippe’s technical manager, David Bonilla, is discussing the dazzling array of movement components on display. Looking on is a handful of avid watch collectors who have been invited to get a rare glimpse of the Swiss watch company’s handiwork on what is a notably rare occasion: the brand’s first-ever U.S. event (along with similar affairs in Los Angeles and San Francisco) devoted to female collectors. For the 20 or so women in attendance, it’s an opportunity not only for a close-up of Patek Philippe’s complicated timepieces, including a remarkable $350,000 minute repeater that releases a poetic chime on the hour, but also to mingle with others who share their horological passions.

That was last winter—and a harbinger of things to come. The women who participated in the event are part of a growing contingent of female watch collectors with a curiosity about, and an appreciation for, complicated movements, and they demand more than just functionality. “Aesthetics and elegance of design are key to ladies choosing a complicated watch,” says Sandrine Stern, Patek Philippe’s head of watch creation. Women are less motivated by chronographs or a jumping second hand, she says, and are more intrigued by useful indications, such as date displays or multiple time zones. When it was released last year, the latest version of the Patek Philippe Ref. 7130G Ladies’ World Time became one of the brand’s most sought-after pieces. With its beautiful peacock-blue dial with guilloche center, it combined all the elements: good looks, a useful complication, and rare handcrafts.

“It’s no longer just about shrinking a man’s watch and adding diamonds,” says Chadi Nouri Gruber, product director at Audemars Piguet. The brand’s new women’s creations made a splash in January at the Salon International de la Haute Horlogerie Genève, counting for nearly half of the manufacturer’s new releases. Perhaps its most daring entry was its first Royal Oak Concept Flying Tourbillon model for women (which came hot on the heels of the flamboyant Diamond Outrage and subtler Royal Oak Frosted Gold collections, both exclusively for women. The result of a desire to combine the company’s in-house haute horology and high-jewelry skills, the diamond-laden watch with an 18-karat white-gold case is powered by the new caliber 2951 and features Audemars Piguet’s first-ever flying tourbillon. With the movement peeking through a stylized snowflake motif on the dial, the watch is bold and modern and about as far from pastel-shaded romance as can be.

Whatever a woman’s individual taste, she wants aesthetics and mechanics that go hand in hand. “Whether dressing for a board meeting or yoga retreat, a woman wants a timepiece that forgoes neither style nor substance,” says Gruber. “Above all, she wants a watch that creates an emotion.”

The centuries-old watchmaker Breguet recently showed its enduring commitment to female watch enthusiasts with the introduction of its Breguet Tradition Dame 7038, the women’s version of its popular Breguet Tradition. First unveiled in 2016, the openwork design, which reveals the inner workings of the high-powered movement, is balanced by such classically elegant details as a mother-of-pearl dial, a pavé-diamond bezel, and an engraved floral motif on the barrel.

These types of mechanical watches encased in jeweled watches will likely catch the attention of collectors like Alice Eduardo, a Manila-based construction-firm owner with a passion for engineering,. Eduardo has a collection of 20 mechanical watches, including models by Audemars Piguet and Patek Philippe. Her favorites, she says, are from the avant-garde watchmaker Richard Mille (she has 12). Mille elongated his signature tonneau shape for a woman’s wrist and made his combination of gravity-defying complications and high-tech materials available in an array of colors and finishes. “I love his complications,” says Eduardo. “They’re the heart of the watch. It’s like wearing a tiny machine on my wrist.”

‘One Last Evening,’ ‘The Village Next to Paradise’ Win First Locarno Industry Awards