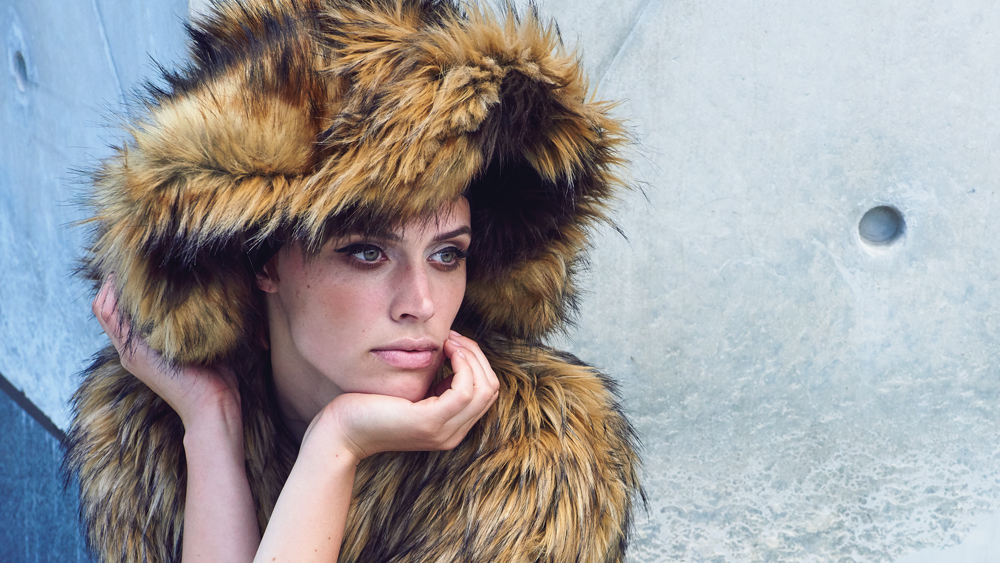 One of the earliest mentions of faux fur in a fashion magazine came in 1899. It was a warning from Harper’s Bazaar: “At all times,” the piece stated ominously, “imitation fur is a dangerous investment.”

Faux, fake, imitation, unnatural—anything less than the real deal has long been shunned as cheap, ephemeral, and, as a fur-industry executive put it in a 1912 Women’s Wear Daily article, a material that should “not be patronized to any extent by good dressers and people of quality.”

But lately, the tide has turned. As more designers and retailers publicly declare them- selves fur-free, faux is officially in fashion. Gucci formally shunned the fuzzy stuff last October; Versace followed suit, with Donatella Versace saying, “Fur? I am out of that.” Yoox Net-a-Porter Group, Giorgio Armani, and Furla have made antifur promises, too. Adding fuel to the fire is also new legislation: San Francisco recently passed a citywide ban on fur sales, and Nor- way—a major producer of furs for fashion brands—plans to shut down its mink and fox farms by 2025.

At July’s Paris Couture Week, Fendi debuted chiffon and organza pieces that were trimmed and shaved to mimic the look of real fur.  Photo: WWD/REX/Shutterstock

Of course, this isn’t the first time that dissidents have made the case for fake. (Remember all those naked supermodels posing for PETA in the ’90s?) But it is the first time such widespread dissent has led to truly high-end alternatives.

Enter Kym Canter. A former creative director at J. Mendel—long a bastion of ultraluxe fur— Canter is CEO of the New York City–based House of Fluff, the faux-fur brand she cofounded last year. Her brand strives to make animal-free legitimately beautiful—more akin to real fur than the Oscar- the-Grouch-like imitations that have all but dominated the faux market in the past.

“When I went to look for something sophisticated and something luxurious, there just wasn’t a product,” says Canter. “So, I basically switched teams. I sold 26 of my own fur coats to raise the money to fund House of Fluff.”

The brand’s coats, which are made in fair- wage factories in New York City, are equal parts traditional and playful, running the gamut from tailored pieces in closely cropped faux fur to over- size and shaggy teddy-bear styles. The results are stunningly similar to the real thing—and Canter hopes that will change the long-dismissive dialogue around going faux. “What I want to do is suggest this is another option,” she explains. “Think of it as a new textile.”

“For a long time,it was a controversial subject, and it was better to be quiet.” — PJ Smith , senior fashion policy manager, Humane Society of the United States

House of Fluff has certainly filled a hole in the market—something proven by the fact that its first collection was picked up almost immediately by Net-a-Porter after it launched last fall. The brand is in good company with similar start-ups, like Maison Atia, which was founded last year by Chloé Mendel, a sixth-generation member of the J. Mendel family. Mendel’s new label applies the same craftsmanship to faux-fur pieces that is typically used for real furs to further disassociate the concept of fake with fast fashion. Another nascent label, the Tel Aviv–based Marei 1998, has also been lauded for its opulent faux-fur coats, which are nearly indistinguishable from the real thing.

Still, fashion’s new cause célèbre doesn’t come without controversy: Fur purists are quick to point out that faux faces its own demons when it comes to the environment. Fabric-fur blends are generally produced using acrylic, nylon, and polyester—synthetic materials that can take centuries to biodegrade. When washed, these materials also shed toxic microfibers that can end up in our water supply and food chain. The shelf life of faux fur is a sore spot, too: Proponents of fur argue that real fur coats can last for generations, while fake versions are more likely to end up in a landfill after a few seasons.

In an attempt to solve the great fur debate, European research firm and consultancy CE Delft compared the environmental impact of real versus fake, taking into account the consequences of production, shelf life, and storage conditions for a natural mink coat compared with a faux-fur coat. The results—which measured energy expenditures of everything from raising animals on farms to seasonal preservation—concluded that the environmental effects of real fur are three to 10 times higher than those of fake fur.

Luxury ateliers like Pologeorgis Furs are making commitments to use pelts from WelFur-certified farms and other sources that vow to treat animals ethically.  Courtesy: Pologeorgis Furs

The fur industry widely disputes such findings. In January, the International Fur Federation released a video criticizing the faux-fur market’s use of petrochemicals and defending the use of wild and farm-raised fur as the environmentally responsible option. “At the moment, sustainability seems to be the buzzword, and I suppose I’m delighted about that,” says Tia Matthews, fashion business director of Saga Furs, a Finland-based auction house that supplies pelts to top luxury brands and furriers around the world. “Because what’s more sustainable than the natural product?”

Meanwhile, faux-fur brands are striving to become greener. For Canter’s part, forgoing fur was a chance not only to fight for animal welfare, but also to create a new material that is both sustainable and ethically produced. Her coats are lined with natural materials like cotton jersey and Tencel, and all scraps are picked up off the factory floor to be repurposed into trim and other accessories. The brand is also working with the Cradle to Cradle Products Innovation Institute to bring a completely sustainable faux fur to market over the next five years. Similarly, Stella McCartney, a top source for luxe faux since the brand’s 2015 launch of Fur-Free-Fur, is another label exploring more sustainable means of production.

“What I want to do is suggest this is another option. Think of it as a new textile.” — Kym Canter, House of Fluff

Other innovators are pushing the faux envelope even further. In something that sounds straight out of a sci-fi novel, VitroLabs is developing lab-grown pelts using stem-cell technology. The San Francisco–based start-up is backed by Future Tech Lab, a company that’s funding a host of fashion hacks, from silk made from orange peels to man-made diamonds. Designers are also exploring new methods to approximate the look of fur: At July’s Paris Couture Week, for instance, Fendi debuted a chiffon coat that was trimmed and shaved in a way that bore a striking resemblance to mink.

Fur providers have also responded to the demand for ethical fashion. Saga Furs recently announced its European WelFur Initiative, which assesses animal-welfare parameters like emotional state, housing, feeding, and quality of human interaction at fur farms across Europe. For fur fans, these new standards, which will be implemented across all pelts produced in Europe by 2020, are a step in the right direction.

Such advancements are a positive path for- ward for fur and the fashion industry as a whole, says PJ Smith, senior fashion policy manager at the Humane Society of the United States. Smith, who has spent nearly a decade helping brands assess risk and their impact on animal welfare, asserts that higher-quality faux fur, combined with growing consumer awareness, will be the impetus for a better industry across the board. “[For a long time], it was a controversial subject, and it was better to be quiet,” he says. “But now [fur-free brands] want to shout it from the rooftops, because…it’s regarded as a wonderful thing to do.” The good news is that the conversation is just getting started. The future of fur, it seems, is only beginning.

Swords and Space Were Hot Topics at Pierre Cardin Gala