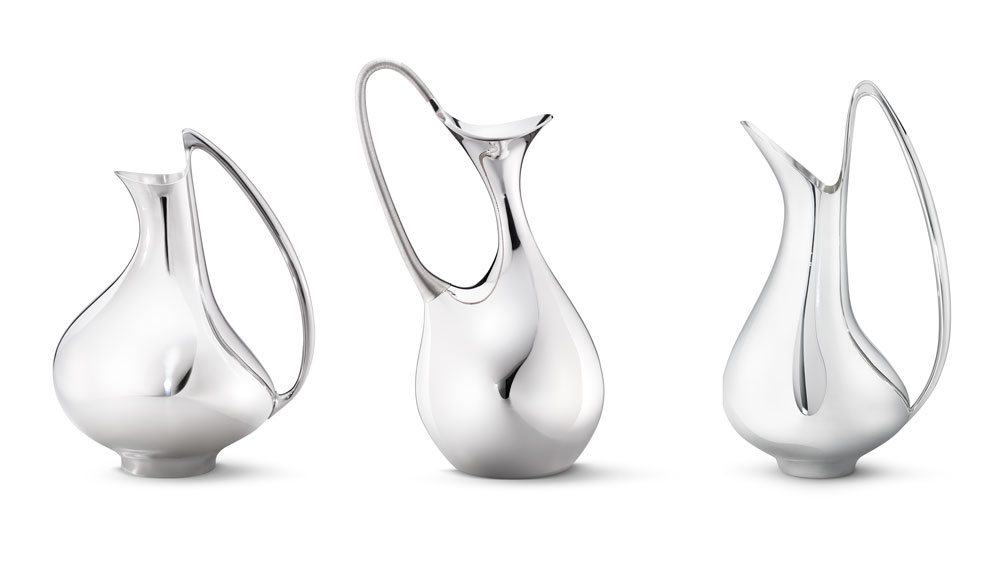 When it comes to contemporary design, Copenhagen is considered one of the world’s most dynamic cities, and it’s worth exploring Georg Jensen’s oeuvre—who established the eponymous silver and hollowware brand here in 1904—to understand the origins of its organic, minimalist, and enduring aesthetic.

Not only did Jensen create numerous lasting signature designs—including the Blossom teapot, a 1905 creation that epitomized the Danish expression of the Art Nouveau movement and is still in active production—he also collaborated with pioneering designers across fields evolving his style and relevance. Among his best-known collaborators was Danish modernist artist Henning Koppel, and to honor his 100th birthday, the Georg Jensen company welcomed a cohort of journalists and design specialists to its workshop, aka the Smithy, this summer to celebrate.

Although Koppel died in 1981, his daughter, sculptor and designer Hannah Koppel, was there to speak about her father’s 35-year relationship with Georg Jensen, for which he designed a series of iconic pieces still in production today, including the Pregnant Duck pitcher, a 1952 creation whose voluptuous silhouette is often described as an exemplar of modernism.

“What’s the definition of Scandinavian design?

It always comes back to the fact that it has to have some clean, organic connection.”

The birthday celebration provided an opportunity for the brand to draw attention to all of the designers with whom it has partnered since Georg Jensen, a talented ceramicist and jeweler that opened for business on Copenhagen’s Bredgade Street shortly after the turn of the last century. The list begins with Danish painter and designer Johan Rohde—the first artist Jensen teamed with, in 1906—and includes some of the most acclaimed artists of the 20th century, including industrial designer Sigvard Bernadotte, iconoclastic jeweler Vivianna Torun Bülow-Hübe, and, more recently, talents such as Marc Newson and the Japanese designer Kengo Kuma.

More broadly, however, the event served as a reminder of why studying the 114-year-old oeuvre of the brand Jensen founded is to gain an understanding of Danish culture—its reverence for nature and obsession with light—as well as the reasons why Denmark maintains such an outsize reputation on the global design scene, even among Scandinavians, the Western world’s foremost creators in the field.

Cindy Trope, an associate curator for product design and decorative art at the Cooper Hewitt Smithsonian Design Museum in New York City, cites the firm’s legacy of working with designers “who have an appreciation for fine craftsmanship and respect for materials and also a keen sense of what makes good, practical, but also beautiful design.”

That’s especially true of the objects created by Georg Jensen’s collaborators. Consider the work of Bernadotte, a Swedish prince who worked with the firm from 1935 until his death in 2002. Known for designing cutlery, bar accessories, and drinkware (among other things) featuring what Nicholas Manville, senior vice president of design at Georg Jensen, describes as “more geometry, cleaner lines, all functionalism, no ornament,” Bernadotte nevertheless infused his Art Deco creations with a Scandinavian essence.

“There’s a slightly organic quality to the shapes, a roundness and volume,” Manville says.

Georg Jensen’s emphasis on curves—epitomized best, perhaps, by Koppel’s curvaceous Pregnant Duck, African Lady, and Swan pitchers—is but one way its designs reflect a preoccupation with nature central to the Danish (and indeed, the Scandinavian) identity.

“Things are designed to complement the climate,” says Manville. “You can see how the hammer marks are created—to bring this warmth and glow into spaces during the winter when it’s dark. The degree of polish with silver is very different because it’s capturing the light that’s here.”

Even the non-Scandinavian designers who have teamed with Georg Jensen—notably, Marc Newson and Kuma, both of whom created tea sets—have strived to harmonize their own styles with the brand’s signature aesthetic.

“We talk about it a lot here: What’s the definition of Scandinavian design?” Manville concludes. “It always comes back to the fact that it has to have some clean, organic connection.”