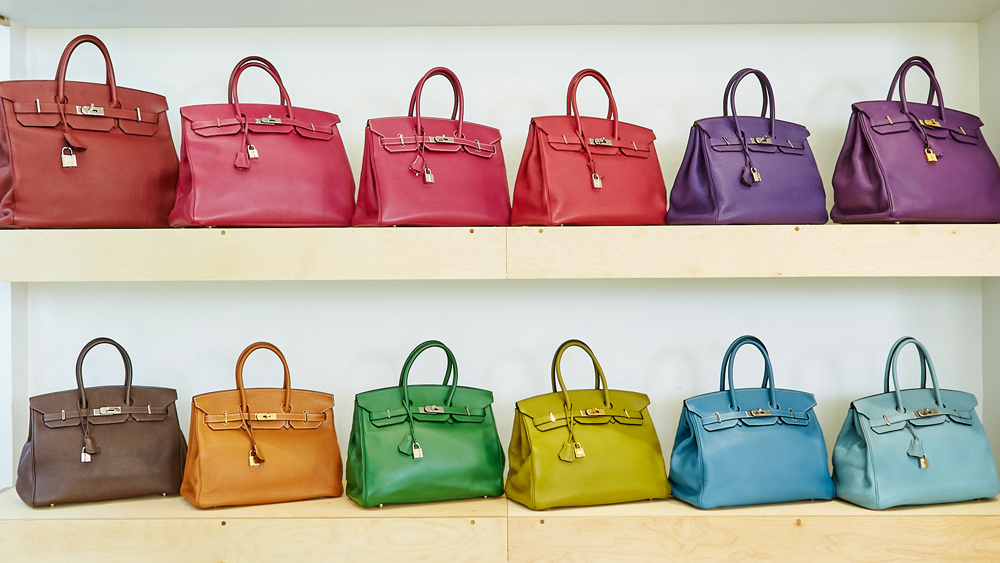 On a sunny November day, Rebag founder and CEO Charles Gorra is getting ready to open not just one, but two brick-and-mortar outposts of the luxury handbag retailer in Los Angeles. One just steps from Rodeo Drive, and the other a 15-minute drive way on Melrose Avenue in West Hollywood. In the former, handbag specialists and publicists flit around, making sure each handbag sits just so on its raw wooden shelf, carefully readjusting the color-coded display of Birkins as women on the sidewalk outside slow to take a closer look at the Guccis and Pradas sitting in the front window. Later that evening on Melrose, Hollywood’s who’s-who and diehard handbag collectors will descend for a swanky opening party. Nothing—perhaps besides the “re” in Rebag—hints this is, in essence, a secondhand store.

Gorra, along with Julie Wainwright at the RealReal, are two of the architects behind the new handbag landscape that has unfolded over the past five years. It’s an environment in which bags are not simply functional and fashionable accessories, but one in which they’re bartered and traded on the secondary market almost as feverishly as vintage watches. This is where women are in for the long game, often paying top dollar (and sometimes far more than they would at a traditional retail outlet) for the bag they’ve set their sights on. Luxury handbags have always been an investment purchase. But now? They’re an asset class.

Those new Rebag stores, along with a sprawling 12,000-square-foot outpost of the RealReal that opened on Melrose earlier this year (both companies have also opened stores in New York over the past 18 months), are evidence of just how loudly this market is booming. “Our thesis is,” explains Gorra, “once consumers easily understand the resale value of their goods, they will embed that information at the level of their first-hand purchase—just like you’d check Kelly Blue Book before buying a car.”

And that is exactly how many of Rebag’s sellers treat the company’s service. They sell last-season’s runway-edition bag to fund this season’s purchase, sometimes at up to 95 percent of the original retail price. After a couple of rounds through the process, they know what bags have the most reliable resale values and often will choose to invest in brands that perform solidly on the secondary market—Chanel, Hermès, and Louis Vuitton being the three that sell consistently across the board. They also know how to spot trends, parting ways with those original Dior Saddle Bags or Phoebe Philo­–era Célines they never wear while the market is hot.

Most bags fall far below that 95 percent ROI mark, according to a Holiday Resale Report released earlier this month by the RealReal, even uber-trendy labels like Gucci and classics like Goyard typically sell for about 80 percent of their original price (with many hovering closer to the 40 or 50 percent mark). But, there are a few that are actually money-making operations for sellers.

The chief among this elite set is the Birkin. Over the past three decades, Hermès’s signature handbag has become a collector’s item on par with your dad’s Audemars Piguet or vintage 911—so much so that in 2014 Christie’s devoted an entire new arm of the house to luxury handbag auctions. Today, the house has specialists in Hong Kong, London, and New York—along with a space for hosting intimate auction previews just up the street from Rebag’s Beverly Hills outpost—who appraise and sell handbags with values ranging from $400 to a record-shattering $380,000 (an ultrarare white Himalaya crocodile Birkin that the house sold in Hong Kong in June 2017).

Investment opportunities at the RealReal.  Photo: Courtesy The RealReal

“I like to say we aren’t an Hermès department,” laughs Caitlin Donovan, the house’s head of sales for handbags and accessories, “but really, 80 percent of what we sell at auction is from the house.” She explains that the scarcity of the model on the primary market, along with the huge range of one-off versions the house has produced of its Kellys, Birkins, and Constances, keep demand extremely high—driving prices far above what they would have been if you’d been able to snag one at a Hermès boutique. She also notes that when it comes to investing in Hermès, collectors tend to go for crocodile and lizard-skin bags, which can go for three times their original retail price on the secondary market. Certain leather colors—namely Blue Jean, which was popular in the 1980s, and Mykonos Blue, a more modern shade—also can drive resale factors. “They all cost the same on the primary market,” she says, “but they go for wildly different sums on the secondary.”

Looking beyond the Birkin, Donovan sees a wider trend happening in her department. “This is the only female-centric department at Christie’s,” she says. “Often our buyers are young, and this is their first introduction to auctions. This is a great way to break down some of the barriers to entry of the auction world, and allow women to see that the space doesn’t have to be so intimidating.”

Though the potential payoff can be huge, Donovan, and her peers at Rebag and the RealReal, are all quick to note that it is rare to see handbag collectors buying and selling for pure profit. And when it comes to advice on where to invest, no one is quick to be specific beyond the usual suspects. “Buy what you love,” says Donovan, “if you buy based on trend or what you think will sell, you are always going to be disappointed.”

It’s a sentiment that the RealReal’s chief authenticator, Graham Wetzbarger, echoes. “Women are drawn to handbags because they are more than just functional, they are talismans that show the world who you are.” And now, more than ever, they reveal your investment savvy.