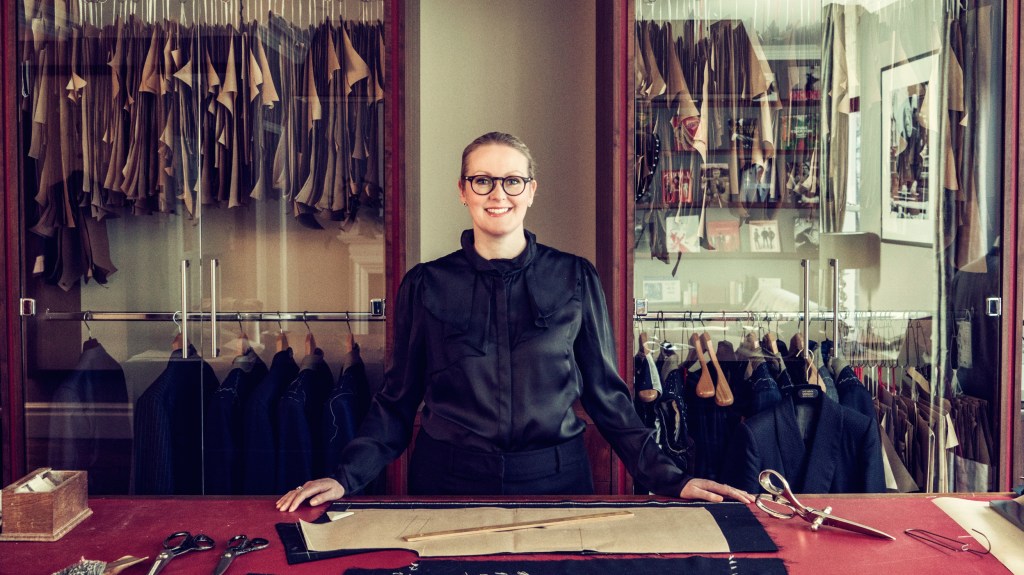 “Why not try to do the most complicated thing?” That was the notion that first drew master tailor Kathryn Sargent, then a fashion student at the University College for the Creative Arts in England, to London’s Savile Row in the early 1990s. “I thought, ‘How can you be a great designer if you don’t know how something is made?’” recalls Sargent. “I knew pattern cutting was complex, I knew it wasn’t easy, and I just wanted to learn how to make something of quality—to have those handmade skills.”

The ambitious Leeds, England, native eventually landed a cutting-and-trimming apprenticeship at Gieves & Hawkes in 1996, where she cultivated her skills under the tutelage of fifth-generation proprietor Robert Gieves. As she climbed the ranks at the historic tailoring house, she gradually introduced womenswear to their offerings—quite frankly, out of necessity. “I had to wear a smart tailored suit to see clients, and [the firm] didn’t have anything that I could wear, so I would make garments for myself,” she says. People took notice of her dapper wardrobe, and as word spread, Sargent began welcoming female patrons to her client base.

“Most women…will tell you exactly what they want,

because they’ve rarely been put in a position where

they can have something exactly made,

and they’ve thought about it quite a lot.”

In 2009, Sargent was appointed head cutter at Gieves & Hawkes, becoming the first woman to ever hold the prestigious position on the storied street. “It was a monumental moment, and was very grounding for me, but then I thought, ‘Where do I go from here?’” Three years later, Sargent made history once again when she opened her own bespoke tailoring house on Savile Row—the first female master tailor to do so—and while she admits to being a trailblazer, she notes that, within the trade, the venture was not as radical as it seems. “In actual fact, I’m very well known within the community,” Sargent confesses, adding that Savile Row has always been diverse behind the scenes. She recognizes the importance of her visibility, but implies that it was a long time coming.

For Sargent, the vision for her eponymous firm was clear: She wanted to steer clear of a signature house style, focusing instead on providing a very personal service driven by each patron’s taste and lifestyle; and she hoped to establish a patronage whose male-to-female ratio is split 50-50. “We’ve grown our female client base hugely since we started, from about five percent to about 35 percent,” says Sargent. “We’ve still got plenty way to go, but I’m very happy with that. It’s a stronger ratio than any other Savile Row tailor.”

When it comes to crafting bespoke suits for women, Sargent’s initial approach is similar to that of her male clients, but the actual tailoring is softer, with less canvas in the construction, and, depending on the cloth and the individual’s desired style—be it very form fitted or more masculine—the cutting and shaping is different as well. And through the collaborative process, patrons are able to dictate their needs. “Most women really have a strong view of the things they like, and they’ll tell you exactly what they want, because they’ve rarely been put in a position where they can have something exactly made, and they’ve thought about it quite a lot,” explains Sargent.

That unique methodology and openhearted hospitality is setting a new bar for the world of fine British tailoring, and neighboring business are adapting with the times, too. “There’s been a real renaissance for tailoring, a whole movement of younger guys and women coming into it as clients and training cutters, and they are going to evolve Savile Row,” says Sargent, who for years was told by many seniors that the trade isn’t something for women. “The days of the gentlemen’s-club tailor are over. Now, people are thinking differently, and there are amazing role models like Ozwald Boateng who are taking the trade forward.” One thing is certain, though: The quality of work being produced on the Row will always remain. After all, as Sargent opines, “You’re only as good as your suit.”

These 2022 Black Friday Deals on Cameras Are Still Available