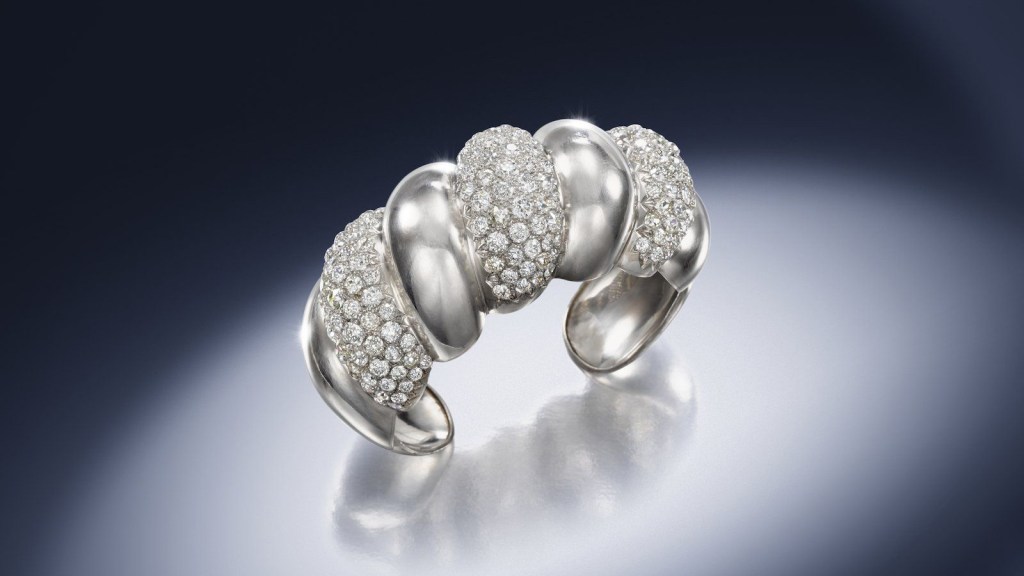 Jean Ghika can vividly recall the first time she laid eyes on a glittering rectangular rock-crystal brooch with diamond-set arrow terminals by Cartier in her grandmother’s jewelry collection. This early exposure to jewelry and a love of history would steer her toward the auction world after graduating from Manchester University. Today, Ghika, who became Bonhams Global Director of Jewelry in 2017 following a stint in charge of Bonhams Jewelry UK and Europe, is considered one of the world’s leading jewelry experts. She directed the sale of a 5.30-carat fancy deep-blue diamond mounted by Bulgari in 2013 that sold for £6.2 million, a world-record price that still holds today. She also directed the sale of the Hope Spinel, a 50-carat gemstone previously in the collection of Henry Philip Hope. Ghika met with Muse to chat about the upcoming jewelry auction season and how women collectors are taking their rightful places at the auction block.

While women might wear fine jewelry, is it true men have traditionally been the buyers of jewelry and gemstones?

The list of 18th- and 19th-century collectors are well documented and this was, without question, a gentlemanly pursuit. George Spencer, the 4th Duke of Marlborough (1739–1817), assembled an extensive collection of nearly 800 carved cameos and intaglios dating from antiquity to the 18th century. Another good example is the legendary collection of Henry Philip Hope (1774–1839). His collection, which included the now-infamous Hope Diamond, the Hope Pearl, and the Hope Spinel, was one of the most important private collections of jewels ever assembled.

Are you seeing more women collectors these days?

Why is it a particularly good time to invest in fine jewelry? Why would you describe it as an asset class?

The very fact that Knight Frank, the UK-based real estate company, and its U.S. partner Douglas Elliman are including jewelry in their Annual Wealth Reports and tracking the market alongside other asset classes means, in some people’s eyes, jewelry is viewed as an investment vehicle. According to Knight Frank, over the past 10 years jewelry has increased by 138 percent, outperforming both U.S. equities and the New York prime residential housing market. I don’t see that as a trajectory that is going to stop. Now the growth may be slower, but I do think these are rare items and there is a finite supply. There will not be another Hope Spinel. This is an extraordinary prospect for buyers in a world where you can go into a luxury designer store and buy the exact same piece of jewelry in any city on any continent.

What’s trendy at the moment?

Art Deco pieces from the ’20s and ’30s are hot items. This is an era of high glamour. The jewels are exquisitely made and can be viewed as a piece of sculpture or art. Signed jewelry—whether that be by a large jewelry house like Cartier, Van Cleef & Arpels, or Boucheron, or by an individual artist jeweler like British jeweler Andrew Grima or French artist Suzanne Belperron—is hot, too. Buyers are prepared to pay a premium for such pieces.

That ’80s look is coming back. It’s wearable jewelry. It’s day to night. It’s stuff people can wear all the way through. When I first started 25 years ago, everything super fashionable was actually quite heavy late-19th century, what we call Victorian jewelry, with lots of gold and lots of monumental jewels. Now it’s not so fashionable so it seems inexpensive in comparison.

Can you name your top picks for sale during Bonhams Fine Jewelry Auctions in New York September 21 and London September 26?

A diamond collar necklace by Harry Winston from the estate of double-gold-medal Olympic swimmer Katherine Domyan (estimate $350,000–$550,000, September 21, New York) is classic Winston. The emphasis is on the individual stones themselves, not the surrounding metal settings, which appear almost invisible. Unlike some fringe necklaces where the drops are solely located at the front, this necklace has fringe all the way around the collar to the clasp. No half measures here!

My other top pick is an asscher-cut fancy-pink diamond weighing 5.04 carats (estimate £600,000–800,000, September 26, London). It’s an exceptionally rare stone. Not only is it over five carats, but the asscher cut is rarely used in colored diamonds.

What advice do you have for women interested in starting a fine jewelry collection?

Try and get exposure to things. One of the great ways of doing that is to go to an auction preview where you have a great selection of jewelry to look at and examine. Ask an expert. I would be drawn to things that you love, things that you have an emotional connection to. Maybe that’s the Art Deco period or maybe it’s the ’70s. If you decide to buy, always try to go for the best in your asset class.

These 2022 Black Friday Deals on Cameras Are Still Available