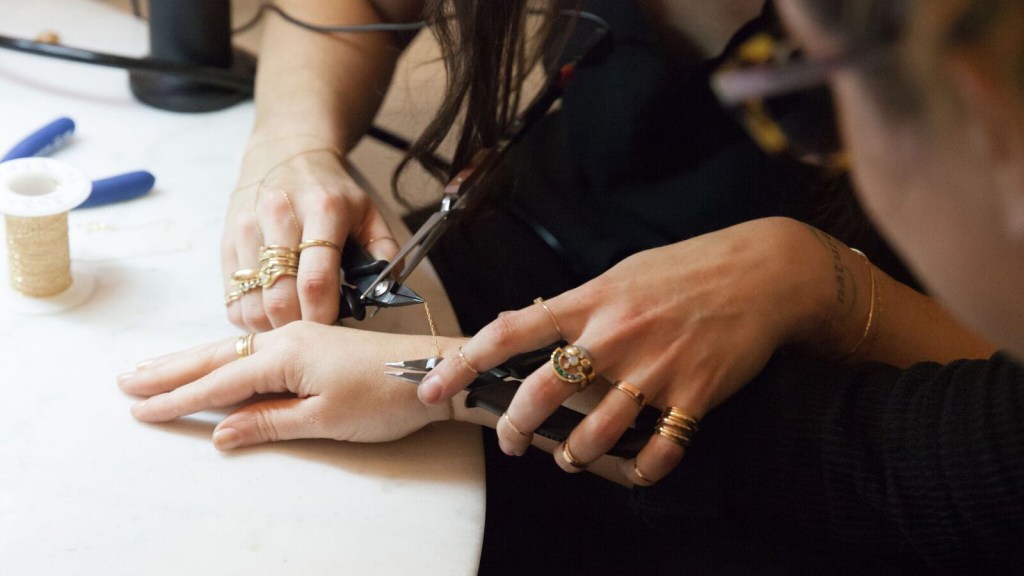 In late July, Eva Chen, director of fashion partnerships at Instagram (@evachen212), posted a series of stories during a field trip she and her teammates took to the Catbird Welding Annex in Brooklyn. The event space, opened by the popular Williamsburg jeweler in May, is where clients go to have delicate gold bracelets welded directly on to their wrists.

“Wait, everyone else is getting bracelets and I’m getting an anklet,” Chen wrote in one of several snaps documenting the excursion. Then, she uploaded a video of her left foot sheathed in a chic black patent leather slide as a Catbird technician prepared to weld on her new forever anklet. “Zap!!! I’m bonded to my IG team mates now,” she wrote.

Chen’s storytelling underscores something savvy jewelers are increasingly coming to understand: In today’s experience economy, memories often rank as high as the products.

Leigh Plessner, co-creative director of Catbird, has seen the appeal of the experiential offering firsthand. Since she and her business partner, Rony Vardi, opened the Welding Annex, she’s watched groups of women treat the $94 bracelet purchase as something of a sacred ritual. “We had a mom and daughter who came in from the Bronx, and a pair of cousins who, instead of getting tattoos, got welded together,” Plessner recalls. “Over time, I do think people will use it as a quiet moment to mark an achievement or transition or an intent they’re trying to set.”

“In the modern experience economy,

memories themselves are the products consumers most desire.”

Her words call to mind Alvin Toffler’s eerily prescient 1970 polemic, Future Shock. “As rising affluence and transience ruthlessly undercut the old urge to possess, consumers begin to collect experiences as consciously and passionately as they once collected things,” Toffler wrote. “As we advance into the future, however, more and more experiences will be sold strictly on their own merits, exactly as if they were things.”

This fall, two venerable names in jewelry are doing exactly that. From October 24 to November 9, Van Cleef & Arpels is bringing its highly regarded L’École des Arts Joailliers back to New York City. Opened in February 2012 in its 18th-century townhouse on Paris’s Place Vendôme, the jewelry immersion program—which offers a nontechnical curriculum structured around three pillars: savoir-faire (jewelry-making techniques), gemology, and art history—has since expanded to include sessions in Hong Kong, Dubai, and, in 2015, a previous stint in New York City.

The fall session—located at 2 East 63rd Street—features 15 courses, including “The Engagement Ring: History, Gemology & Know How,” “Trying Hands at Japanese Urushi Lacquer,” and “Amulets & Precious Symbols.” Enrollment is limited to a maximum of 12 participants in each class. Courses, which can be purchased à la carte, range in price from $125 to $250.

In addition to classes, L’École will offer seven conversations between jewelry experts exploring topics such as jewelry in film; three exhibitions, including a showing of chokers and bangles by the American artist Daniel Brush; and four workshops designed for children and teens.

The workshops “involve interacting with a jewelry designer and other jewelry-expert teachers for immersion into the creative process and making something fun to take home, like their own ‘treasure chest,’” says president Marie Vallanet-Delhom.

What’s unique about L’École is that it allows both novices and connoisseurs to experience the rich world of jewelry from the point of view of an apprentice. By contrast, at Christie’s New York, a two-day course December 3 to 4—exploring “the market, history, provenance, and design of the lots” due to appear in the house’s Magnificent Jewels sale—is aimed at creating more informed buyers. Called “Hidden Gems: Jewelry Behind the Scenes,” the $875 course includes handling sessions coupled with lectures on topics such as “The Great Tiffany & Co. Designers,” “A Global Tour of Sapphire Sources,” and “How Art, Fashion, Technology & Globalism Defined Art Deco Jewelry.” Although the program promises to imbue its participants with a considerable degree of esoteric jewelry knowledge, the experience, says Christie’s course leader Marisa Kayyem, delivers more than education.

“Often students sign up with friends,” she adds. “Part of what makes the course special is that we bring together people from all ages and locations who share a passion for jewelry.” The class is limited to 20 because many of the visits to jewelry houses, galleries, and workshops have limited space, but that size allows for individual attention and for the forging of connections among the students.