Looking for Robb Report UK? Click here to visit our UK site.
×
By Kareem Rashed on May 4, 2018 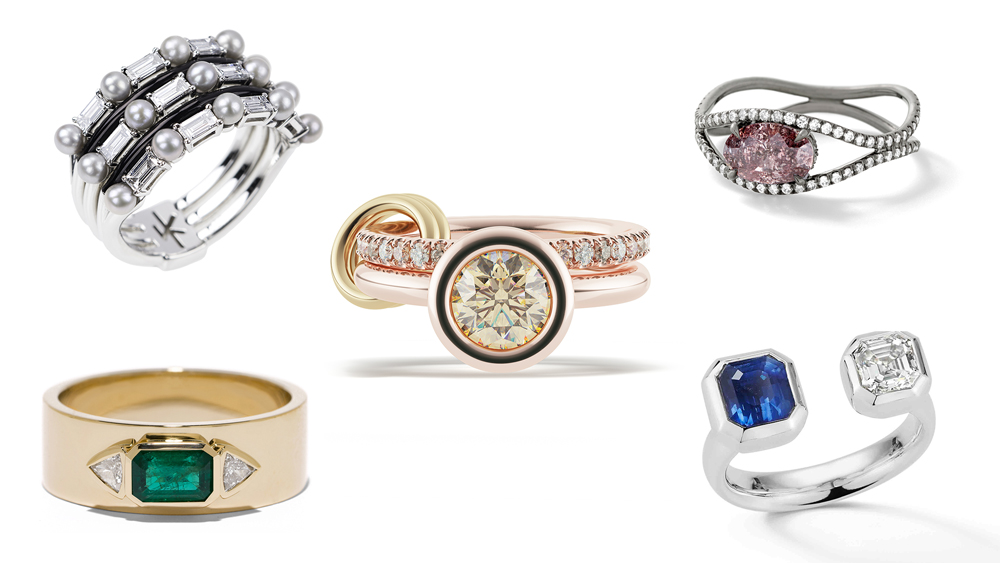 It’s a tradition that’s baked into our culture: Everyone from the ancient Romans to Beyoncé has reinforced the notion that if you love someone, then you’ve got to put a ring on it. But times have changed: People are questioning the status quo in every part of their lives, and couples and jewelry designers alike are reconsidering just how tried-and-true the engagement ring is—or should be.

The history of the diamond engagement ring is a long one, dating all the way back to 1477, when Archduke Maximilian of Austria commissioned one for his bride-to-be, Mary of Burgundy. The news of Maximilian’s purchase—which was one of the first recorded instances of a man eliciting the aid of a diamond to sway a woman in a marriage proposal—spread throughout Europe’s well-heeled circles and sparked a trend that would last for centuries. By the time the enterprising minds at De Beers coined the brand’s “Diamonds are Forever” campaign in 1947, the concepts of romance and marriage were inextricably linked to a sparkling piece of jewelry.

“Everyone from the ancient Romans to Beyoncé has reinforced the notion that if you love someone, then you’ve got to put a ring on it.”

But the traditional engagement ring—which has long meant some variation of a diamond (large or small, maybe more than one) on a thin band (platinum or gold, pavé or polished)—is no longer prescribed. Shane Clark, a bridal consultant and contributor to Brides magazine, has been watching the rise of more stylish and avant-garde options for years. “[Modern couples] want to customize every aspect of their wedding, so it certainly starts with their ring,” she says. “Whether it’s the type of stone or the color of the metal, it’s about wanting something different and unconventional that speaks to an individual and their personal style.”

Of course, it’s logical: You may well wear this ring every day for the rest of your life—shouldn’t it be something you’d actually want to wear? Stephanie Wynne Lalin of the bespoke jewelry brand Jemma Wynne thinks so. “An engagement ring should suit [your] lifestyle,” she says. “Like a cashmere hoodie, it should feel really rich and special but super-comfy at the same time.”

Following that ethos, many of Jemma Wynne’s engagement rings remix classic designs in casual and fuss-free ways. For instance, a two-stone ring with a Ceylon sapphire and Asscher-cut diamond set in an open band gives the illusion of stones floating on the skin. It’s effortless, and even something you’d be comfortable wearing to the gym. Yet, it’s still impactful.

Satisfying the modern couple’s desire for personalization, meanwhile, is Spinelli Kilcollin, the Los Angeles–based jewelry house created by Yves Spinelli and Dwyer Kilcollin. When the couple married in 2017, they wore their own signature Galaxy rings, a trio of bands set with different colored diamonds. The style, with its numerous bands and connectors, not only lends itself to customization—it also presents the opportunity to tell a story.

“We make a lot of custom rings where the number of bands or colors symbolize something meaningful,” Spinelli says. “We’ve made engagement rings where the bride will connect the wedding band, and then connect an anniversary band later. I like the idea of a ring that can grow with you.”

“You may well wear this ring every day for the rest of your life—shouldn’t it be something you’d actually want  to wear?”

Indeed, an engagement ring with meaning that goes far beyond its sparkling surface is increasingly important to modern couples. Sustainability, in particular, is a factor that has gained significance in the past decade—especially given the murky ethics surrounding much of the diamond mining industry. The New York–based jeweler Monique Péan is the conscientious couple’s go-to for her exclusive use of vintage and conflict-free diamonds and 100-percent-recycled gold and platinum. Beyond their sustainable appeal, Péan’s graphic and architectural creations fly in the face of tradition, thanks to conversation-starting materials (like black fossilized dinosaur bone) and designs (including one inspired by the artwork of Yayoi Kusama).

Of course, what makes an engagement ring is not the materials from which it is composed or the style in which it has been created—it’s the intention with which it has was given (and received). Marriage is no longer the prescribed event it was in Archduke Maximilian’s day (or, for that matter, in the days of De Beers’ “Diamonds are Forever” campaign). The significance of this long-held institution has rightfully evolved to mean simply the act of two loved ones joining their lives together in whatever way makes sense to them. As we redefine marriage, shouldn’t we rethink the symbols that go along with it? That’s one ideology we can all say “yes” to.

Emmy Rossum Wore Fake Earlobes to Star in ‘Angelyne’: ‘It Doesn’t Get Much More Full-On Than That Makeup’