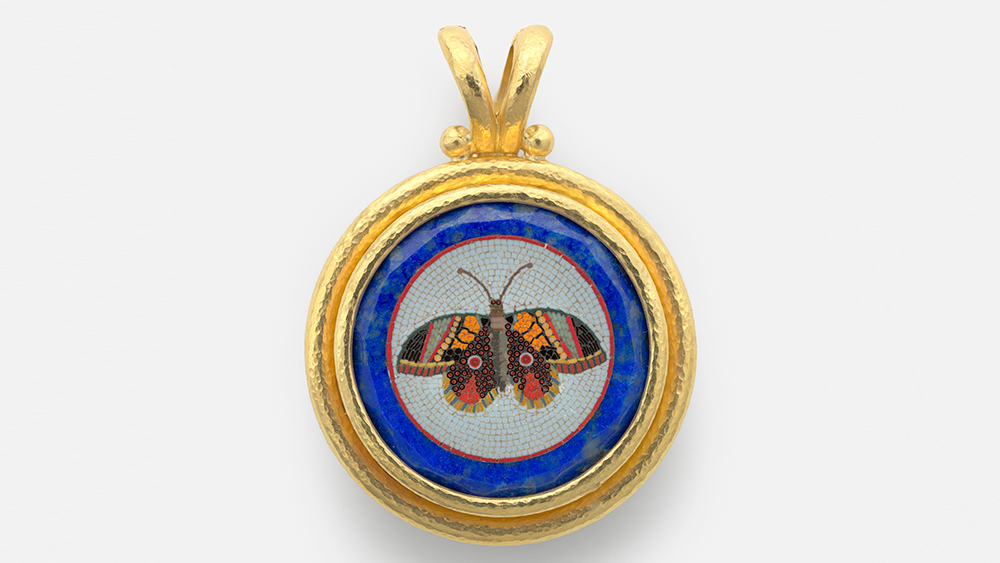 Any passionate collector will tell you that the fun of collecting is often the hunt. That certainly holds true for jewelry designer Elizabeth Locke, who first discovered micromosaics as a student in Florence, and has been chasing them down for the past 30 years in antique stores and flea markets in Rome, Florence, London and more. That obsession, as she calls it, led to an extraordinary assemblage of the miniature artwork. Many of them are set in statement-making gold jewelry, and now she’s also sharing her most coveted pieces with a greater audience. Nearly 100 micromosaics are on display in the exhibit A Return to the Grand Tour: Micromosaic Jewels from the Private Collection of Elizabeth Locke at the Virginia Museum of Fine Arts in Richmond through September 5.

The micromosaics are unique wearable works of art and history made with hundreds—sometimes thousands—of tiny glass or enamel tiles meticulously assembled into finely detailed portraits, landscapes and imagery. These miniature images were especially popular souvenirs in the mid-18th to late-19th centuries when aristocratic Europeans and affluent Americans traveled across Europe in what was known as the Grand Tour. At the peak of their demand, around the mid-18th century, more than 200 mosaicists lived and worked in Rome making miniature portraits of the most famous Greek and Roman monuments, including the Coliseum and Piazzo del Popolo, along with Greek mythological figures, flora and fauna.

When Locke first started purchasing micromosaics, she transformed the simple pendants into stylish 19-karat-gold jewelry with stones, pearls or gold granulation to sell, but over time she became consumed with uncovering the more unusual varieties, like horses and dogs.

And, like most collectors, she simply couldn’t part with her favorites. “It’s entirely visceral and visual,” Locke says in an interview with the museum’s associate curator, Susie Rawles, about what she looks for. “I enjoy finding late-18th-century micromosaics because they are rarer than the 19th-century ones, but I don’t discriminate based on the year of creation.”

Nowadays, it’s nearly impossible to find a beautiful micromosaic in good condition, says Locke. “Thirty years ago, I used to meet a guy at 6:30 in the morning at Portobello market in London to go looking for micromosaics and we found beautiful ones. Those days are long gone.” Don’t despair, if you are looking for a micromosaic piece of jewelry, the designer still manages to produce a handful every year pulling them from a stash she has built over the years.

Locke is known for taking old relics and transforming them into something new, wearable and modern, including collectible old Roman coins and intaglios. Over more than 25 years in business, she has built a loyal following who collect her pieces, which also includes chunky gold-link bracelets and necklaces with a hammered finish in the perfect hue of yellow gold.

A butterfly depicted in a 19th-century micromosaic.  VMFA

As much as she enjoys scouting for unusual gemstones, she still hunts for those elusive micromosaics and Roman coins, knowing a good catch is a rarity these days. “I squirreled away so many micromosaics over the years because I couldn’t bear to sell them,” says Locke, which is why she chose to donate them to the museum where they will be kept together as collection. When asked if she’ll miss her micromosaics, she replied, “Yes, there are some I’ll miss but it gives me a reason to keep looking. I can go six months without finding anything and then someone will find some tucked in a great aunt’s drawer that they want to sell.” And, she kept a few favorites, including a portrait of a whippet dog.

A 19th-century micromosaic set in gold and stones.

Still, there’s always something new to uncover, and Locke’s latest discovery is an 18th-century French button with a hand-painted image of a cardinal, which she converted to a pendant and saved for a fellow Virginian friend because the cardinal is the state’s bird. It takes a vision to transform what’s old and forgotten into something new and desirable.