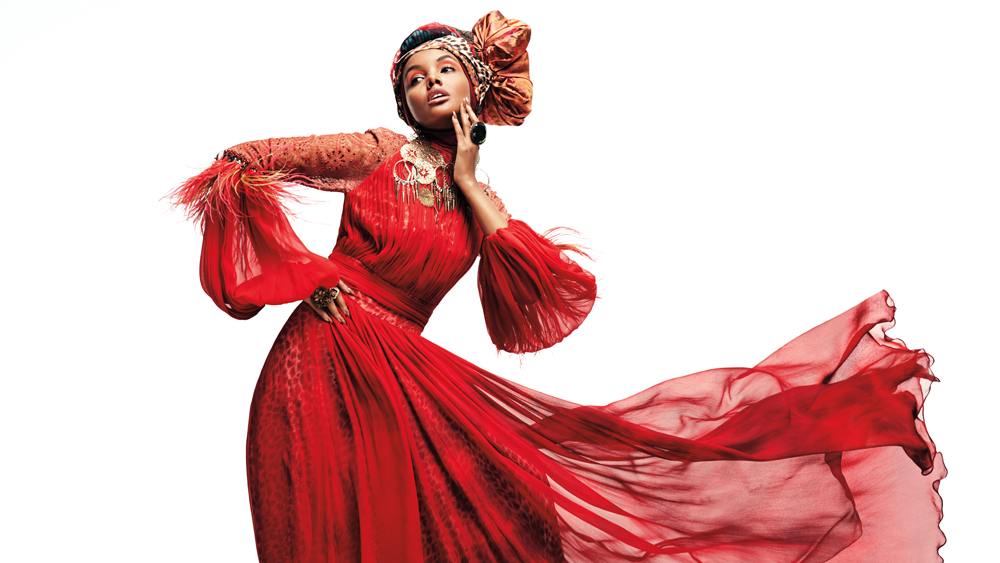 When one thinks of fashion, the hijab is unlikely to be the first garment that comes to mind, but  Contemporary Muslim Fashion, an exhibition opening at San Francisco’s de Young Museum on September 22 aims to change that. And, given the popularity of the Met’s blockbuster Catholic-church-themed Costume Institute exhibition Heavenly Bodies, which has attracted more than a million devotees since making its debut in New York on May 10, this latest show dedicated to those who dress to be seen without being seen just might succeed in its mission.

Organizers say that while it is a commonly held belief outside the Muslim world that there is no fashion among women who dress according to the tenets of their faith, quite the opposite is true: They intend to prove it by showcasing some 80 ensembles by established designers and brands—such as Oscar de Renta and Nike as well as emerging designers such as Brooklyn-based fashion activist Céline Semaan Vernon of Slow Factory—who specialize in all facets of the fashion industry from today’s popular streetwear to couture creations, the latter having been commissioned by elite Muslim clients since the second half of the 20th century. And as the show points out, the “modest” fashion industry is anything but, being currently valued at $44 billion a year and poised for growth, largely as a result of social media. Muslim women—those who cover their heads and those who do not—have become arbiters of style within and beyond their communities, and in so doing have drawn mass-media attention to contemporary Muslim life.

Ahead of the show’s opening, Muse spoke with its cocurator Laura Camerlengo, associate curator of Costume and Textile Arts at the Fine Arts Museums of San Francisco, to talk about the exhibition and surprising aspects of it.

What prompted you to mount the exhibition?

There has been an explosion of creativity from the Muslim modest-fashion sector in the past decade. My colleague, Jill D’Alessandro, curator in charge of Costume and Textile Arts, and I thought it would be exciting to explore this development, as the different styles of dress are distinguished by enormous variety and creativity. The Fine Arts Museums of San Francisco is an ideal venue for this exhibition for many reasons—we have a strong history of critically acclaimed fashion exhibitions, a costume and textiles collection that is rich in artworks from Muslim-majority cultures, and we are situated in an area with a sizable Muslim audience.

Tell us more about the show.

Contemporary Muslim Fashions focuses on various corners of the globe where designers are creating, and consumers are wearing, highly fashionable garments that adhere to individual concerns for modesty and related aspects of Muslim religious cultures. It would be impossible to cover the total breadth of these developments, so we have focused on areas of the world where there have been major creative developments in recent years, including the Middle East, Malaysia, Indonesia, and among diasporic communities in the United States and Europe.

What is the most interesting aspect of Muslim dress that came out in your planning for the show?

Perhaps the extraordinary diversity in regional dress codes that influence international modest-fashion trends. We have also been impressed by the strength of the global social media community, which is avidly supporting the development of modest fashion. Contemporary Muslim Fashions offers a snapshot of modest Muslim fashion at the present moment; as this sector continues to rapidly grow and change, it will also be exciting to see where it goes next.

What is your hope in terms of viewer takeaway?

We hope audiences will appreciate the breadth and diversity of Muslim modest fashions, as well as the artistry and creativity of the designers. We also hope that the exhibition will serve as a reminder that fashion and dress have long been interpolators of religious and cultural affiliation, and that this tradition continues today as well.

Will the show be traveling?

Yes. We are excited to share the exhibition with audiences in Europe. After the exhibition closes on January 6, Contemporary Muslim Fashions will travel to the Museum Angewandte Kunst in Frankfurt, Germany, where it will go on view in the spring of 2019.