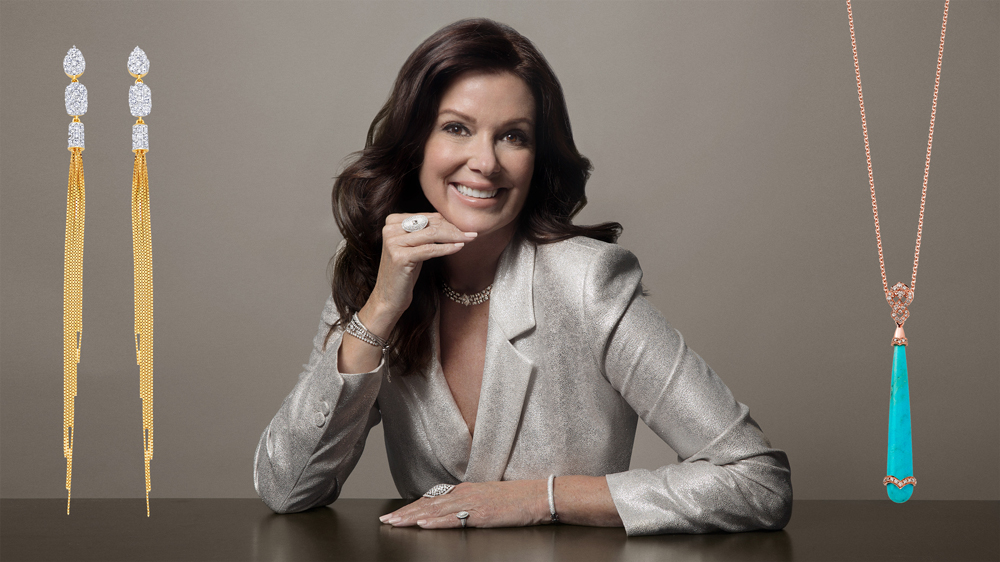 Before she launched her eponymous jewelry label, Sara Weinstock had another full-fledged career—that of a wife and mother of two. But after her long-term marriage dissolved, the California native was faced with the daunting task of reconstructing her life, and revisiting her background as a former actor-model, with a degree in communications, did not seem like a realistic option. So, she decamped to Lake Tahoe to find some solace and clarity, and it was there, immersed in nature, that her creativity blossomed. “Tahoe became this huge palette for me,” reflects Weinstock. “I would sit by the [Truckee] River and watch the water tumble over the rocks. The river rocks became a blank canvas for me to apply some sort of meaningful message, and that’s what my first collection, Universal Love, was really based off of.”

Weinstock’s resulting pieces, which she launched as a collection in 2008, featured natural stones and symbols that echoed her own journey, including the lotus flower (representing new beginnings), the serpent (for protection), and the hamsa (the hand of God). “It was never intended to be a business. It was really for my own healing,” she says.

In the decade since she debuted her label, Weinstock’s own narrative has evolved, and so, too, have her creations. While the Malibu-based designer’s works still thoughtfully incorporate figurative motifs, they have since blossomed into refined, diamond-encrusted jewelry pieces, as seen on the likes of Amy Adams, Priyanka Chopra, and Lupita Nyong’o. The progression is telling of the GIA alumna’s newfound confidence. “When I became single, I went toward the spiritual realm for self-healing,” Weinstock says. “Now the pendulum has swung back to my roots. My first love of jewelry was always diamonds.”

“[My] relationships are built on trust and the common love of creating.

Someone who appreciates my jewelry usually has a similar mindset as me.”

Today, her ever-growing fan base includes high-profile celebrities and tastemakers, many of whom have developed a personal bond with the jeweler. “The relationships are built on trust and the common love of creating. Someone who appreciates my jewelry usually has a similar mindset as me,” she says. In fact, it was while Weinstock was spending a sunny summer afternoon with girlfriends, sipping Champagne, that she came up with the concept for her new Brut collection. “It was sparked from friendship—and drinking by the pool,” she laughs.

Her appreciation of strong female connections harks back to the bond she had with her artist mother and younger sister, both of whom have passed away. “My mom was the bravest, strongest, most talented woman I knew. And my younger sister, Laura, who was born with Down syndrome, was a blessing, and touched the lives of so many,” says Weinstock. She also proudly cherishes the friendships she has built with other jewelry designers like Anita Ko. “We talk about everything—about our stores, what’s working this season, if our numbers are off,” Weinstock admits. “We support and genuinely care about each other’s businesses. When you don’t feel like you’re strong enough to share what you have, and you’re trying to stay on top of everyone else, that comes from insecurity.”

Perhaps the most important thing Weinstock has learned in the past 10 years is that you can’t force anything, be it creativity or relationships. “I wrote something recently that’s really the message of who I am: ‘I no longer force things. What flows, flows; what crashes, crashes…[I’m] letting go of all that no longer serves my highest power. In order to be creative and have inner peace I must remain authentic to myself first.’”