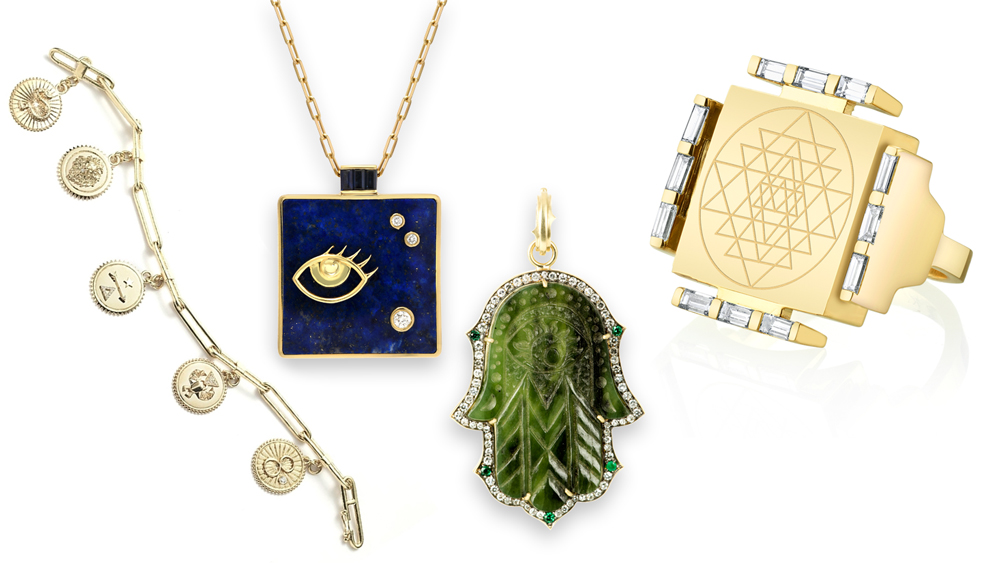 Whether it’s the state of the planet, the country, or something much closer to home, there’s no shortage of negative energy floating around these days. Given the daily reminders of the issues plaguing the world, what you wear can seem like a trivial matter. But increasingly, women are looking to jewelry—that most intimate accessory—for a cosmic boost of support and good vibes.

It’s a concept that is as old as jewelry itself. For as long as mankind has been adorning itself, jewelry has been a meaningful symbol. Ancient civilizations wore jewels to commune with higher powers, and in medieval times, various stones and icons were worn to protect against ailments from fever to melancholy. Now, a new generation of talismans employs the same logic, offering women precious tokens that are designed to heal, protect, and serve as a spiritual compass.

These symbolic jewels go beyond sentimental engravings or monograms; they’re not mementos so much as tools. Much like their antecedents, many of today’s talismans take the form of charms that are worn to address whatever ails you—or to consecrate your goals. Want to ward off negativity? Go for an evil eye. Channel strength? Try a lion. Find peace? Opt for Om.

“Think of it as the fine-jewelry equivalent of a yoga class:

The tradition may be foreign,

but the principle can benefit most everyone.”

“I see the symbols as a physical token of an intention you set, or a declaration of your next chapter,” says Beth Bugdaycay, the designer of Foundrae, a collection designed around tenets like wholeness, resilience, and passion. “The vision from the beginning was that people could combine symbols in a way that communicated what they were trying to say. I see our lexicon of symbols as a toolbox for an internal language.”

The talismans trending today transcend eras and cultures. Evil eyes can be traced back to numerous Mediterranean empires; the Hamsa, a stylized hand, has roots in both Islamic and Jewish faiths; and snakes have been revered by ancient civilizations from South America to Southeast Asia. It’s that universal quality that makes these symbols so appealing—and even if they’re having a renaissance now, their meaning goes back centuries.

“We all share a human need to connect,” says Me&Ro designer Robin Renzi, who has featured talismans in her collections since she first launched 27 years ago. “These symbols, amulets, and talismans are a way to connect with something deeper in ourselves, as well as others.” Some of Me&Ro’s most popular amulets derive from Eastern cultures, including pendants inscribed with the Sanskrit word for “fearlessness” and the Hindu character Om—but they resonate in any language.

Ark designer Ann Korman began her collection while in India, forming her designs around tantric symbols and Vedic beliefs about gemstones. What simply look like geometric patterns or colorful stones actually correspond with ideas detailed in ancient Hindu texts. Think of it as the fine jewelry equivalent of a yoga class: The tradition may be foreign, but the principle can benefit most everyone.

Some talismans forgo symbology altogether, choosing to focus on the energetic properties inherent in gemstones. Such mystical power of natural stones is central to Jacquie Aiche’s designs. “The pieces I create are intended to carry a special, spiritual energy with them,” she explains. “Precious gemstones have insane healing powers that balance your energy, and blending them with diamonds and gold makes you feel even more beautiful and empowered.” In addition to her signature collection of gem-studded jewels, Aiche recently introduced a gold-mesh pouch, called a Voler, that can be filled with loose stones to heighten various properties: amethyst for strength, for example, or lapis for serenity.

Of course, there’s no research that actually proves any of these talismans have any real mood-enhancing benefits. But that, Me&Ro’s Renzi says, is hardly the point. “They’re a good reminder! These symbols carry our beliefs, hopes, and dreams across time.” If a piece of jewelry can do all of that and be beautiful at the same time, it might just have the power to cure a few of the world’s bad vibes, too.

Amber Ruffin on Racism, Comedy and the Joy of Enduring