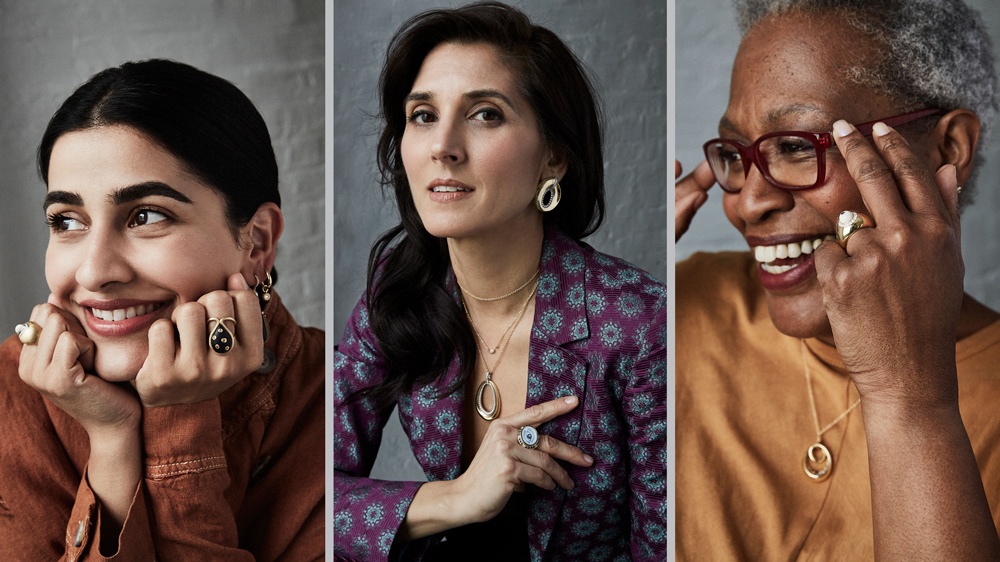 The glittering world of jewelry often seems far removed from the today’s pressings social and political issues. But Ana-Katarina Vinkler-Petrovic, the New York-based designer of AnaKatarina, is defying the status quo, using her advertising campaign as an opportunity to address topics that most brands shy away from. Having begun her career as a war correspondent, Vinkler-Petrovic is as well-versed in activism as she is in precious gems. So, what might seem like disparate endeavors for most — championing the underrepresented and crafting luxury jewels — are equally important parts of her brand.

AnaKatarina’s latest campaign features five remarkable women, from an American Paralympian to a Qatari fashion blogger, who are fighting to spark positive changes in their own communities.

A major turning point in Vinkler-Petrovic’s own life was during her time reporting on the Balkan Wars in Bosnia. After being captured and held hostage for 21 days, Vinkler-Petrovic returned to the United States and continued humanitarian work with the UN while putting in time at her parents’ art and jewelry gallery in Cambridge, Massachusetts. “In 1999, one of the gallery’s clients gave me an opportunity to redesign her engagement ring into a post-divorce necklace,” she recalls. “This began my love affair with jewelry design.”

From the beginning, Vinkler-Petrovic vowed to continue to stay true to her humanitarian principles. She uses exclusively conflict-free and fair-trade gems, recycled gold, and donates a portion of all sales to Women for Women International, an organization that supports females who have been affected by war. Last year, she started to use her brand as a platform for activism, launching an ad campaign called “Iconic Women” that subverted conventional notions of beauty. “I created [the campaign] as a reaction to America’s current socio-political climate where women and minorities are being dangerously marginalized,” she says. “Life experience has taught me that unless a message elicits an emotional, heartfelt reaction in someone, they will resist anything that transcends their belief system.”

The latest campaign takes the concept one step further, highlighting real women whose exceptional achievements haven’t gotten their due. “I am tired of stories about celebrities and their accomplishments,” Vinkler-Petrovic says, noting that there is a “disconnect that many segments of society experience in understanding the complexities of women’s lives and struggles. I wanted to share the stories of these real-life warrior women.” And more than just tell their stories, she is portraying them as beautiful and bejeweled — proving that grit and glitz aren’t mutually exclusive.

The women featured in the campaign paint a rich, diverse picture of the many ways that females today are affecting change. Asha Singh was born and raised in rural Nepal but rather than following tradition and becoming a housewife, she became part of the most successful female team to ever scale Mt. Everest, a Nepalese national sports champion and climbed the highest mountain on six continents. Joy Cain has worked to encourage and inform throughout her career as an editor and writer for magazines such as Essence, Sports Illustrated and Redbook and now employs those skills in mentoring adolescent boys. Shana Pederson is the founder and president of Life Preservers Inc., a non-profit artist collective that raises funds and awareness to eradicate human trafficking in New York City. Anum Bashir is a Qatari, Dubai-based art and fashion consultant whose Desert Mannequin blog is a platform for sustainable design. Femita Ayanbeku joined the Paralympics twelve years after losing her leg and, after just six months of training, became the U.S. national champion for the 100-meter race and established a non-profit providing support to the amputee community.

This impressive lineup shines a light on how many other equally accomplished, extraordinary women are working to better the world without any recognition. Just like the individuals lending their faces to the campaign, Vinkler-Petrovic is using her power — as a woman, an entrepreneur, a designer — to inspire advocacy. Discussing how she chose these five women to represent the breadth of female power, Vinkler-Petrovic notes their similarities rather than their unique differences: “Their journeys show profound courage and honesty amidst the insanity we are living through with strength, love, humor, and intelligence.” Attributes that, no doubt, we can all agree are worth celebrating.

Alexander Rodnyansky on the War in Ukraine, Why He Fled Russia, and What’s Next for AR Content