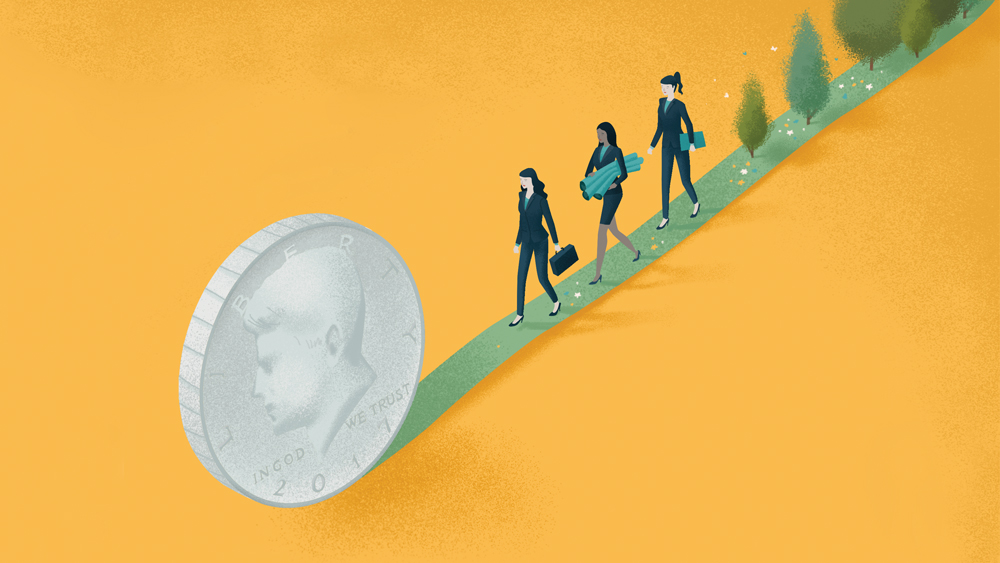 Leaders like BlackRock CEO Larry Fink have taken notice. In his annual letter to CEOs this year, Fink wrote: “Society is demanding that companies, both public and private, serve a social purpose. To prosper over time, every company must not only deliver financial performance, but also show how it makes a positive contribution to society.” Some on Wall Street say that Fink’s message sets a tipping point for the whole investment industry.

Demand is clearly growing for investments that factor in better environmental, social, or governance (ESG) performance, and statistics show they can deliver profits and long-term stability. The proof is in the figures: The MSCI KLD 400 Social Index, a capitalization-weighted index of 400 U.S. securities that provides exposure to companies with outstanding ESG, reports that its annualized returns (over a 20-year period ending January 31, 2018) were 5.46 percent, slightly better than the S&P 500’s 5.43 percent over the same period.

Certainly, it is hard not to find an investment firm that offers funds focused on companies engaged in such practices as promoting clean energy or creating a more inclusive workforce. And strong interest from women investors, particularly millennials, has the potential to add as much as $22 trillion to investments in conscious capitalism, according to estimates from the impact-investing firm Swell Investing. That would greatly increase the existing pool of nearly $9 trillion.

A growing number of women, BlackRock’s Huang among them, are taking leadership roles in positioning impact investing as a mainstream strategy or integrating the theory as an integral way of analyzing the value proposition of any investment. BlackRock has about $50 billion under management in investment vehicles it categorizes as “dedicated sustainable,” including exchange- traded funds, funds that make direct investments in wind and solar projects, and green bonds that finance environmental projects. But it is also starting to provide data and tools that will make it possible to integrate ESG considerations across all of the firm’s investment platforms.

“Society is demanding that companies…serve a social purpose.

To prosper over time, every company must not only deliver financial

performance, but also show how it makes a positive contribution to society.”

What makes continuous incorporation of ESG factors possible, says Huang, is a proliferation of data on how a company’s activities might be echoing through the world. “We can now evaluate a company’s entire carbon footprint by extending the emissions calculations to their supply chain and their products, for example,” she says. “We’re also moving beyond thinking of climate risk just through the lens of carbon emissions and looking at physical risks driven by extreme weather events, such as water scarcity due to droughts, and at technological advancements, such as companies investing in energy storage.”

Big investment firms are also producing research indicating that social good tends to correlate to good corporate performance and lower price volatility. A BlackRock report published earlier this year states that “strong ESG performers tend to exhibit operational excellence—and are more resilient to perils ranging from ethical lapses to climate risks.” Savita Subramanian, head of U.S. equity and quantitative strategy at Bank of America Merrill Lynch, contributed these findings in the first of a series of reports about ESG investing: “It’s not just for tree-huggers….An investor who only held stocks with above-average ranks on both environmental and social scores would have avoided 15 of the 17 bankruptcies we have seen since 2008.”

None of these performance findings are a surprise to Jackie VanderBrug, director and co-head of impact investing for the global-wealth and investment-management division of Bank of America in Boston. “Social change is not linear, and it can be messy,” says VanderBrug. But what she finds encouraging is that “we’re beginning to see more conversations between investors and companies about transparency on issues such as board diversity, or climate-change competency, or worker equity throughout the supply chain, or data privacy. The idea is that over time this leads to changes in corporate behavior that leads to huge impacts in the world.”

VanderBrug has been a force in defining the components of social-impact investing. She coauthored with Joseph Quinlan the 2016 book Gender Lens Investing: Uncovering Opportunities for Growth, Returns, and Impact, in which the two said that “so-called non-financial measures of performance” can be critical to understanding where good financial performance comes from.

There are more entry points for social-impact investing, says VanderBrug. “We’re seeing more impact strategies in municipal bonds, emerging markets, and in alternatives such as hedge funds. So that’s exciting in terms of the product mix that’s available, and it should deliver more scale.”

The growing product mix means that wealth advisers can steer you into impact investing through a wide spectrum. At one end are equities in large-cap companies that measure up to the best ESG standards; at the other are funds that provide backing to women in remote villages so that they can start small businesses and create jobs. And there is a growing array of products in between, including some aimed at affordable housing, clean energy, and health initiatives in the United States.

or bad effect—and when reputation damage over pollution or sexual

thereby creating something of a self-fulfilling prophecy.

Consider, for example, the ways Veris Wealth Partners puts money into what is now one of its most popular impact-investing themes— gender-lens investing, as detailed in the firm’s 2016 Impact Report (published late 2017). Veris works with a mission-driven credit union to provide loans to women entrepreneurs and founders of color. For instance, Hope provided a small business loan to two women in Biloxi, Miss., who were then able to buy the bakery where they worked. Veris has also invested in Procter & Gamble, finding the multi- national corporation’s women-friendly policies an important value booster.

There’s a dividing line somewhere in that spectrum, however. In some ways it’s easier to measure the social impact and the payoffs of companies that are actively traded on stock exchanges. When investors pay attention to their impact on society— whether it’s a good or bad effect—and when reputation damage over pollution or sexual harassment sends investors seeing, their stock prices can move accordingly, thereby creating something of a self-fulfilling prophecy.

It would be nice if, when you invest in small community-impact projects, your money could be just as big an incentive to others to invest in these projects, thereby creating scale as well as strong returns. Smaller can be equally fruitful, but there are some challenges.

On the one hand, financial market expertise is essential. “If it’s just ‘Kumbaya,’ you’ll never have impact,” says Durreen Shahnaz, the founder and CEO of the Impact Investment Exchange (IIX) in Singapore, which operates a private placement platform and the world’s first social stock exchange, though the stock exchange does not yet actively trade securities.

On the other hand, it isn’t easy for big money from all over the world to find its way to social businesses in remote villages in a way that doesn’t lose sight of the mission. Serving both investors and communities means you need a plan at each stage of the value chain for providing access to capital in a responsible and sustainable way, says Beth Bafford, vice president of syndications and strategy at Calvert Impact Capital. As more money is activated for impact, she says, we need to ensure it is going to people, businesses, and communities in a responsible and intentional way.

There is still room for proof of effectiveness when it comes to the many small social-impact projects. A 2016 study from the Wharton Social Impact Initiative of the University of Pennsylvania looked at what happens to the actual mission when investors in private-equity impact ventures seek liquidity. The Wharton study found that, so far, deals have generally provided market-rate returns without sacrificing the impact of the mission, or vice versa, but said that investors need more quantitative information to understand what’s behind the returns, including additional metrics on the short- and long-term social impact. That kind of data could help unlock additional capital.

Unlocking more capital is an important part of what Shahnaz, the IIX founder and CEO, aims to accomplish. Born and raised in Bangladesh, Shahnaz is an Oslo Business for Peace Award winner and has been a Wall Street banker and a media executive. She cofounded, and eventually sold, an e-commerce business called oneNest that sold the handicrafts of women artisans to the global marketplace.

“From the back street to Wall Street has been the theme of my life,” says Shahnaz, who started IIX nine years ago after encouragement from Antony Bugg-Levine, a former managing director of the Rockefeller Foundation who has been credited with coining the term “impact investing.”

She is now working on developing a market that hasn’t existed before, bundling investments in social-impact projects into securities that can be traded on the IIX social stock exchange. Such a move would go a long way toward drumming up more investor interest. As things stand now, when holding period—as long as 10 years—and many investors would be more comfortable knowing they can sell their holdings if they need to. (Calvert Impact Capital, it should be pointed out, is one firm that sells shorter-term bonds in social-impact funds, including one-year notes.)

It would be nice if, when you invest in small community-impact projects, your

money could be just as big an incentive to others to invest in these projects,

Smaller can be equally fruitful, but there are some challenges.

For Shahnaz’s big ambition to materialize, it will take the detailed coordination of transparency about investor returns and data on where the capital is going that all deals need, plus, she says, a core of recipient businesses that can pass the feasibility test. They’ll have to be able to show that they have a well-defined mission and an operational plan in place, along with financial statements that spell everything out to investors and auditors.

Meanwhile, she is bringing in gradual changes. The Impact Partners platform has brought in $23 million of investment capital into early and growth-stage social enterprises that has resulted in an additional $51 million of follow-on investments. A typical recipient is Mera Gao Power, a solar energy enterprise in northern India. With the help of impact capital, Mera Gao plans to expand its customer base by more than 50,000 households over the next four years. The impact comes when rural residents receive a reliable and inexpensive source of power, providing lighting and mobile- phone charging to households for the first time.

IIX has also issued an $8 million Women’s Livelihood Bond, which has impacted the lives of more than 385,000 women in Southeast Asia by providing them with increased credit access, market linkages, and affordable goods and services. It is listed on the Singapore Exchange Limited.

Now Shahnaz has a new bond in the works, the Women’s Health Bond, aimed at financing cervical-cancer care, maternal health, and family planning for underserved women in the U.S. The goal is to issue a $20 million bond each year over a five-year period, and ultimately help make health care accessible for some 2.5 million women.

These are just some of the possibilities that can be achieved through social-impact investments. Now that we have a sense of the potential for good, money alone is far less a value proposition.

NCAA Revenue Dips to $1.14 Billion as Self-Insurance Costs Kick In

What’s Coming to Disney+ in February 2023