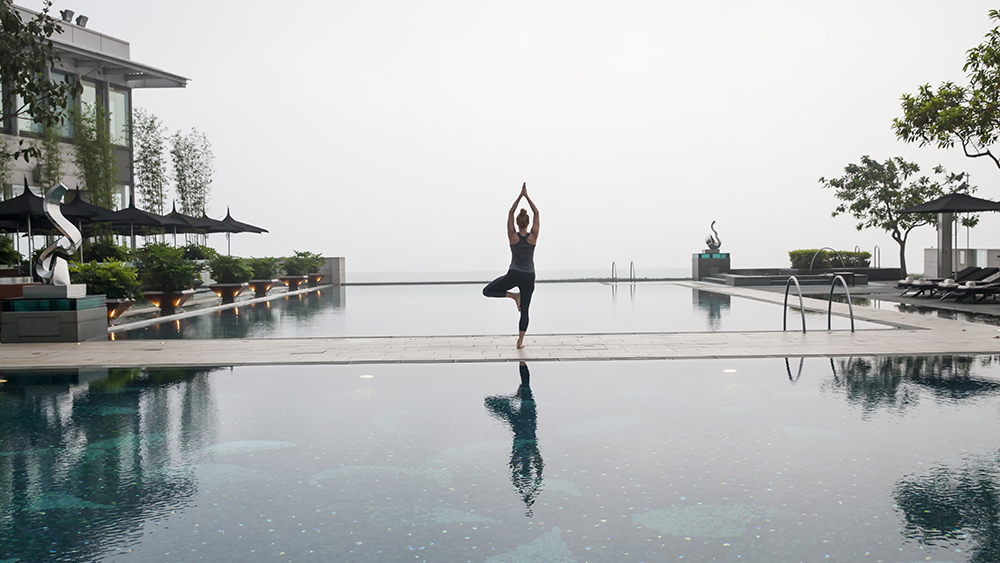 We’re calling it: 2019 is the year of mindfulness. Though the word is being thrown around more and more frequently these days, its history dates back thousands of years—so you could say the movement have been a long time in the making.

But what is mindfulness, exactly? It can be confusing when you see the word “mindful” applied to everything from eating to organizing, yet there’s a distinction between “being mindful” and practicing mindful meditation. The latter is the practice of training your mind to be in the present—to quiet the endless chatter and stress—and learning to be dispassionate and nonjudgmental about your thoughts.

“Mindfulness meditation is an actual mechanism that’s been very well studied and has good evidence for reducing stress and increasing focus and cognitive control,” says Beth McGroarty, director of research and PR for Global Wellness Institute.

The relationship between the two definitions: Mindfulness meditation teaches one how to be mindful. That can take the form of being more present in your daily life and creating distance between your thoughts and stresses (hello, 24-hour negative news cycle). Yet when you’re constantly surrounded by people, places, and things that cause anxiety, that’s easier said than done.

And that is where travel comes in. Studies show that taking a vacation is already good for your mind (though Americans still don’t take nearly enough, leaving a collective 705 million unused vacation days on the table each year), and people are starting to catch on. “Getting to that place where you destress and reset the brain faster is one of the biggest desires in travel right now,” says McGoarty.

Planning a trip that incorporates elements of mindfulness can help you reap even greater benefits. “We get into a different mental state by getting into a different physical space—taking a break from email and things that irritate you,” explains David Spiegel, MD, director of the Center for Integrative Medicine at Stanford University, who teaches a course on mindfulness. “The physical setting is a message that you can change your mental landscape as well.”

Learning to manage your mind can also help you deal better with physical pain associated with stress, and have positive effects on medical disorders caused by stress, such as hypertension, diabetes, and even cancer, says Dr. Spiegel. If that’s not reason to book a trip ASAP, we don’t know what is. With that in mind (get it?), we’ve rounded up eight of the most amazing mindfulness experiences at resorts throughout the world. These spots aren’t just pushing mindfulness for vanity’s sake, either; they are created by actual experts who want to help you harness it. Take a look.

The Resort at Paws Up

There’s nothing like standing alone in a pen with a 1,500-pound horse to force you to be mindful. This is the scenario you’ll find yourself in with the Horse Whisperer program at The Resort at Paws Up in Greenough, Mont. Equestrian manager Jackie Kesckes compares the experience to a job interview. “You have key strengths that you try to tout to a prospective employer,” she says, “but you don’t really come to know what it takes within you to practice those traits until you’ve been in a pen with an animal that views you as a threat, despite your best intentions.” That, at its core, is mindfulness: earning the horse’s trust as you each interpret the other’s every move. It’s much harder than it sounds, yet you’ll leave with takeaways that stay with you long after you’ve returned home. The quiet, natural setting of Paws Up in Montana’s wilderness can help guide a further state of enlightenment.

Surrounded by red-rock buttes, and renowned for its vortexes, the desert town of Sedona, Ariz., is known for its spiritual energy—so it’s only natural to expect a roster of meditative experiences at L’Auberge de Sedona, a Destination Hotel, one of the few luxury resorts in the area. “People are searching for something in Sedona—and we want to tap into that,” says Sean Olmstead, general manager. Even skeptics experience transformation through the property’s star bathing ritual.

Led by therapist Yolanda Curtis, the hour-long session begins at dusk on a grassy knoll above the resort with breathtaking views. As you take part in several sensory experiences, done barefoot, you begin to feel more in tune with nature; an exercise in which you pick your own star and “receive” a message from it reminds you of the universe’s sheer magnitude—and how little your daily stresses matter in the scheme of it.

With a mindset that the notion of health applies to both physical and mental wellbeing, Como Parrot Cay in Turks and Caicos employs an overall spirit of “mental quietude,” surrounded by the tranquil waters of the Atlantic. As a guest, you have access to an expert team of wellness consultants—including an Ayurvedic physician, a restorative Thai massage therapist, and a resident acupuncturist—who work with you to determine the most suitable therapies to fit your needs.

For example, for a stressed guest struggling to sleep, resident Dr. Parth Maharjan might “prescribe” ayurvedic treatments like pizichili (through which you’re bathed in lukewarm medicated oil with simultaneous massage) and shirodhara (an ancient therapy that involves pouring oil on the forehead from above). Each unique program is designed for lasting change. “Health is something that has to grow from within you,” says Dr. Maharjan—and this program aims to nurture that seed.

People have flocked to Israel for thousands of years to float in the Dead Sea. Yet you can have a similar experience right here in the United States at Amangiri in Canyon Point, Utah, which focuses on the four Navajo healing traditions (earth, air, fire, and water). Designed as a tool to help you practice mindfulness, the water element—a saltwater float tank—is located in a Buddhist cave-like space meant to circumvent claustrophobia (unlike the enclosed float pods you can find at boutique studios). Climb in and get comfortable during five minutes of lights and soft music; for the next 20 minutes, all stimuli is shut off, creating an environment highly conducive to a meditative state. The lights and music slowly come back on the last five minutes, yet you may not even notice. “I have seen many times the guests get into such a relaxed state that we have to go into the flotation pavilion and wake them up,” says Amangiri’s spa manager, Anthony Andra.

Through a new program called the Marry Oneself Journey, Rosewood Mayakoba in Riviera Maya, Mexico, taps into the rich culture of its geography to expand upon its already spiritual Sense spa. This three- to four-day experience, guided by the ancient pre-Hispanic wisdom of creation, is a deeply personal journey of self-discovery. A series of meditative treatments and guided rituals led by a resident shaman culminate with a self-commitment ceremony, which tends to be emotional.

“Many people travel through life without knowing their full capacity to love; they are disconnected and likely looking in the wrong places,” says Fernanda Montiel, a multigenerational shaman and healer at the property. “True love begins with accepting that you already have everything you need to be happy.” Consider Marry Oneself a crash course in learning to love and honor your own presence on the planet.

The second Miraval, opened in the Texas Hill Country in January, has much of the same magic as its sister property in Arizona. Part of a brand known for its emphasis on mindfulness, Miraval Austin provides constant subtle reminders to be present. A key way to do this is to hone in on your breathing, the focus of experiences like pranayama-dina (which means “flying breath” in Sanskrit).

“Breathwork and sound are two powerful tools that can help change your perception and mental state of being,” says Simon Marxer, director of spa and wellbeing at the property. As such, breathwork is built into every treatment, and sound vibrations cleanse your mind on a cellular level. During the Yojana couples experience, crystal singing bowls harness those vibrations to help you find clarity as a duo.

Renowned for its luxury spa and fitness experiences, One & Only Palmilla in Los Cabos, Mexico, is expanding its definition of wellness this year through five weekend retreats in partnership with Wanderwell, a company that creates bespoke transformational wellness journeys. In honor of Global Wellness Day on June 8, the Mindful Wellness retreat includes a centuries-old temazcal ritual overseen by shaman Raul Retana, who spends five hours preparing for each one.

“During the ceremony, we remember who we are and where we came from,” he says. “Guests experience a radical change of their energy and emotions.” Set in a standalone structure that resembles a clay igloo, it begins with a steam bath infused with a customized concoction of detoxifying desert herbs and heated by locally collected volcanic rocks. When combined with indigenous music, incense, and medicinal drinks, the treatment is said to heal the body and purify the mind.

Once a month on the night of the full moon, a team of healers leads moon meditation in a room set up as a haven of calm, with meditation cushions set in a circle around a mandala made of flowers, crystals, and candles. It’s an environment that exudes peace, yet is even more powerful because it takes place the Four Seasons Hotel in Hong Kong, in one of the world’s most fast-paced cities.

“Mindfulness and meditation is one way that people in this city can manage stress, build resilience, and heal,” says Amy Powell, director of communications for the hotel. The moon meditation begins with a talk on the meaning of the month’s moon. Then you lie down, wrap up in a warm blanket ,and join a 20-minute nidra session, known as sleep yoga, followed by silent meditation. A reception afterward with healthy cuisine (and Champagne!) celebrates the sense of community built during the session.

Djokovic Deported on Eve of Australian Open, Flies to Dubai