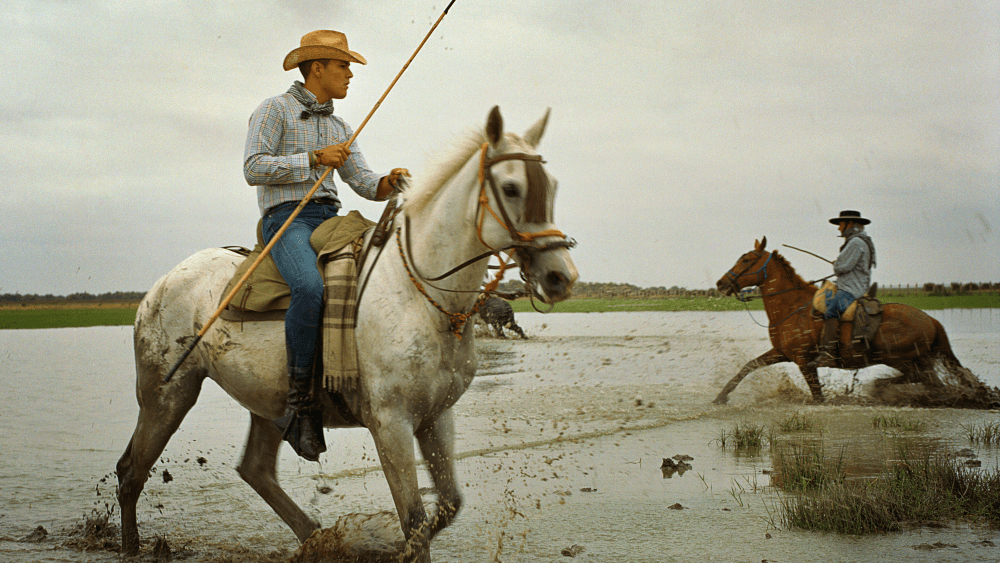 Ganaderos, or local cowboys, work the edges of the roundup.

The thrum of a guitar draws me into a swath of forest where Spanish cowboys are gathering under a golden dusk. Around 30 men pause in a grove of tall umbrella pines. They are all on horseback, a few children included, their knees hitched up on the pommels of the saddles; the men are drinking beer and rebujitos (sherry and lemonade) in the dusty evening light. The scene has the feeling of a party from centuries ago: fathers and sons, song and drink, a cedar-scented forest where horses graze in fenceless freedom.

It is the first night of the Saca de las Yeguas, or Separation of the Mares, among Spain’s biggest horse festivals of the year. Drinks are served from a flatbed trailer hooked onto an old tractor. The gathering in Doñana National Park is an intimate event closed to those without personal connections to the cowboy families. As the shadows stretch with the Spanish dusk, the rhythm of the Andalusian melodies picks up, the sound as richly evocative as the way these horsemen are dressed: flat-brimmed felted hats, leather chaps, riding boots with elegant stitchwork and saddle flaps adorned with punched-leather frills and scalloped edges. It is a texture the British shoe designer Penelope Chilvers sketches as she talks to old friends; she draws the horse blankets, the plaited reins and the fringed browbands used to keep the flies at bay.

“Look at this,” she says, running her hand admiringly over a sweat-stained canvas saddlebag on a horse’s glistening flanks. “See how beautifully it’s made. The art of Spanish saddlery is like cooking a Spanish stew. They don’t let anything go to waste.”

Ganaderos parading through the town of Almonte.  Photography by Emma Hardy

Chilvers talks about Andalusia as her spiritual heartland, and she has kept a home north of the region for 30 years. “Most people have horses here,” she says. “There’s nothing elite or exotic about owning a horse; it’s just the rural way of life. These are the same people who raise partridge and hunt wild boars, who keep the countryside as it was.” The surrounding region, between Doñana and Seville, is where Chilvers’s boots, bags and shoes are made. Among the men in the forest this evening are the local guarnicioneros—Spain’s traditional saddlers, on whom Chilvers relies for their artisanal art, including the punched leathers derived from the Moorish-Arab tradition practiced here since the 15th century. Chilvers’s boots have become one of those stealth luxuries that transcend everyday fashion; her signature Long Tassel boot flies out of her London stores, especially since the Duchess of Cambridge took to wearing them.

The Saca de las Yeguas, which takes place at the end of June, is utterly un-touristic. Aside from Chilvers, a French chef and his five friends, mine is the only foreign voice I hear in three days of festivities. We stay in the town of El Rocío, in a beautiful, simple Spanish bed-and-breakfast, with balconied guest rooms, a terra-cotta terrace twined with bougainvillea and a sitting room with a log fire, family photographs, antique furniture and well-loved armchairs. This is old-school Spain, with old-school prices, where little English is spoken and the tapas, from octopus to juicy prawns stewed in garlic, are eaten with bare hands.

Penelope Chilvers’s equestrian-inspired boots, cut from one piece of leather, being prepared for stitching.  Photogaphy by Emma Hardy

The festival ritual is blissfully uncommercial. On day one, the cowboys corral Doñana’s several hundred Marismeño horses (a rare breed related to the American Mustang from early days of colonization), which live semi-wild in the protected park. The horses’ galloping hooves throw billowing dust as the herd is guided into a pen in sight of El Rocío’s white church.

The next morning, the wider community meets in the main square. Under a high midday sun, the herd is driven past the church to be blessed. This small town with wide, sandy streets has more hitching posts outside homes than garages. But then there are more horses than cars in El Rocío, more saddlery shops than supermarkets. Even the bars have high tables so that the locals can eat and drink on horseback. El Rocío is a kind of holiday town for horse lovers, where Andalusians can spend the weekend away from the heat and pace of nearby Seville.

The holy blessing complete, the herd is driven through the separating crowds and on to another pine forest, toward the town of Almonte, where the horses are again corralled. The cowboys check the animals’ health, inspecting the new foals, while the families, including wives, grandmothers and children, feast on picnics under the trees. There is more music, followed by a long siesta, and then the cowboys get back on their steeds to drive the herd on a final parade through Almonte’s cobbled streets. Locals pack the balconies, doorways, bars and restaurants in a kind of collective ritual that precedes the third day of commerce, when some of the Marismeños are sold. The rest are driven back to Doñana. It is a little piece of Spain that seems to belong to the pages of a Cervantes novel, an immersion into a rare way of life that smells of dust, sweat and flowers, that the cowboys, who sit deep in their saddles like kings, share as willingly as their quail stew and barrels of beer.