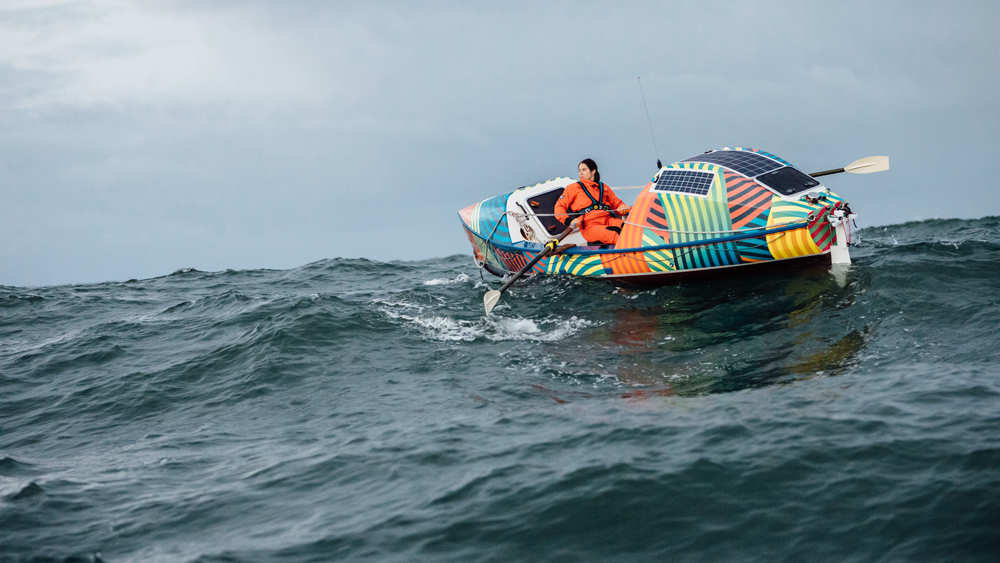 True crime podcasts, protective SPF clothing, Parmesan cheese—just a few of the must-have items Lia Ditton will be bringing along when she sets out from the coastal town of Choshi in Japan next spring for the San Francisco Bay to become the first woman to ever row solo, uninterrupted and unassisted across the North Pacific. It’s a task few have attempted, and only two men have ever completed. “On a weekly basis, somebody tells me I’m crazy and I shouldn’t do it,” says Ditton from San Francisco, where she is in the midst of training for the epic voyage, which could take between four and six months.

Though she is a seasoned, sea-faring competitor now, rowing oceans was never really part of Ditton’s plan. While the London native has years of experience in the marine realm as a charter yacht captain and solo sailor, she only became serious about rowing when the recession hit and after she (mournfully) took a job in business development. “I called it my ‘desk sentence’—I thought I had died and gone to an office,” she recalls. But then, Ditton got a last-minute call from a friend, an Olympic rower who was looking for a partner with whom to cross the Atlantic. “(The idea) caused me much hilarity. I chuckled about it for weeks,” Ditton says. She declined the trip, but a seed of curiosity had taken root. “I started to look into it—who are these people who row oceans?” They were, in fact “a fascinating mob of mostly amateurs who’d build a boat in a garage, and would then row it across an ocean with no experience rowing an ocean,” Ditton says. “I was like, ‘That is mad.’ And I became fascinated enough to want to do it myself.”

In 2005, at 25, she became the youngest finisher and the only woman to complete the OSTAR (Original Singlehanded Trans-Atlantic Race). To date, Ditton has propelled herself across an ocean 15 times—traversing different routes over the Pacific, the Atlantic and the Indian Ocean.

“I handed over my bank details and my passport information not knowing if I would make it.  It was thrilling and exciting and terrifying. It really was the great unknown.”

But next spring’s 5,500 nautical mile voyage will be another animal. She’s likely to encounter breaching whales, howling wind, sharks, squalls, and dive-bombing sea birds—and those are just the external obstacles. Extended time out at sea can be incredibly isolating, even with Cold Case Files playing on a speaker for company. During long-haul trips, Ditton’s daily routine is pared-down to the simplest physical comforts. “Life’s real main priorities are your own safety, food, water, and sleep,” she says. “You develop enormous gratitude for a sunrise, a sunset, a dry sock. Or that feeling of having slept and eaten.” Of all the phrases she repeats to encourage herself, lately, one in particular sticks: How badly do you want this? The phrase has become an unwavering motivator. “It is really bothering me at the moment. It’s insidious. It annoys me. And it never fails.”

As she has trained, Ditton has amassed a swell of supporters and donors who cheer her on through her website. Many close to her (especially her immediate family) are anxious for the journey ahead. Ditton herself does not take this trip’s dangers lightly. She recalls prepping for one of her first solo sailing races: “I handed over my bank details and my passport information to my best friend not knowing if I would make it.  It was thrilling and exciting and terrifying. It really was the great unknown.”

Dangers and unknowables aside, Ditton is still driven to succeed, and prove a point.  “This is a journey to prove equality,” she wrote on her personal blog last year. “The ocean is the final frontier for discovery and my mission is to explore what it is to be human, a woman and a pioneer. In doing so, I want to spark generations of role models.”

“(When I) talk to young girls about what I’m doing‑— they look at me like I’m a Disney princess!” Ditton says. “There’s so much opportunity with this particular row to have a meaningful impact.”