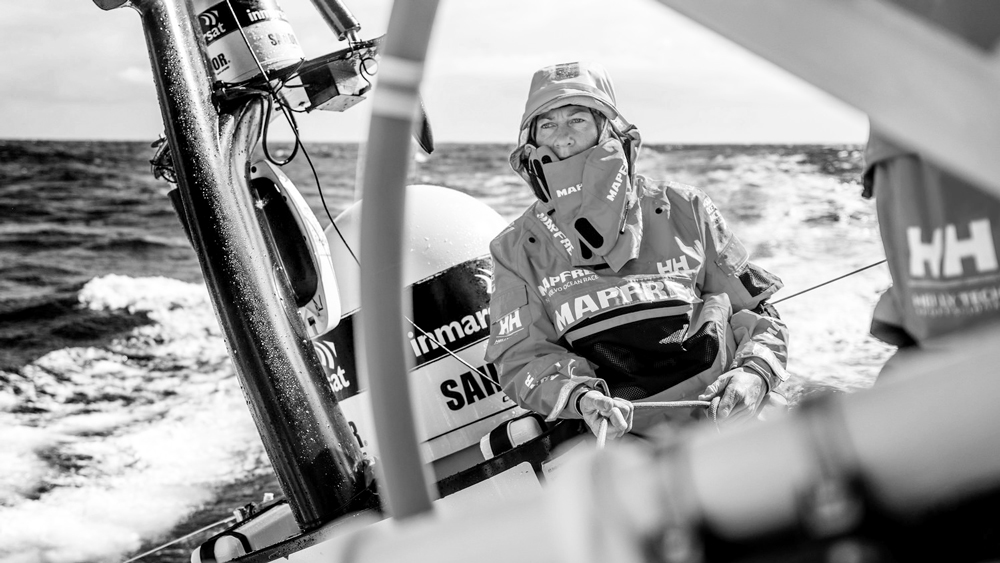 Dee Caffari  has sailed around the world five times. The British skipper is the only woman to have circled the globe, nonstop, three times, and, in 2014, she set a new speed record for a female crew circumnavigating Britain and Ireland. But last year, when she set out to join one of the seven teams competing in the 13th Volvo Ocean Race—the world’s longest and most extreme off-shore sailing race lasting nine grueling months—she was rejected by every single one.

“I applied to all the other teams and asked for a position on their boats, and I didn’t get it,” Caffari says. “I didn’t even get a trial.”

There’s no doubt that sailing has long been a male-dominated sport. In last year’s America’s Cup, winner Team New Zealand employed just five women out of 91 staffers—and none of them were crew members. In the Volvo Ocean Race, the exclusion of women sailors and skippers has also been glaringly evident: During both the 2008-2009 and 2011-2012 races, not a single woman competed. By comparison, the 2014-2015 race saw 13 women compete—all on the same female-only team, which was created largely as a response to the longstanding discrimination.

Last year, Volvo Ocean Race finally addressed the issue head-on, mandating new standards that fall just short of forcing participating teams to include female sailors. The new rules dictated that teams that choose to sail all-male would be restricted to just seven team members; teams with at least two women on board could sail with a team of nine; and skippers could employ 10 sailors if their team consisted of an even male-to-female ratio.

Caffari chose the third option, assembling her own team of five men and five women, and amassing a collection of sponsors that include the United Nations’ clean-seas project, Turn the Tide on Plastic; the Ocean Family Foundation; and Sky Ocean Rescue. The only female skipper in this year’s race, Caffari is also the only skipper to take advantage of Volvo Ocean Race’s new incentives: Her team is the only one to include an equal male-to-female crew ratio. (The other six boats chose to man their vessels with seven men and just two women.)

“It’s probably the hardest thing I’ve ever done in my life,”

“Every time, I say I’m not doing this again—and then here I am.”

“I’m very much an advocate for a mixed environment,” Caffari says. “I don’t like the rules to mandate it, because I want sailors to be there on their own merit and not their gender. But we have to start somewhere.”

Indeed, the new rules are just that: a start. Carolijn Brouwer, who is currently sailing on team Dongfeng, argues that the effects of such established discrimination won’t be so easy to erase. “During the time that we did SCA [2014-2015’s all-female team], the guys had been sailing one Volvo Ocean Race after another,” she says. “But most of us had done zero. So, of course, they’re going to have more experience and more knowledge.” SCA finished the race in last place, a feat that Brouwer says was nonetheless impressive, given the lack of opportunities for women in her sport. “Unless we get mileage driving, our driving isn’t going to get better,” she says.

To be sure, that “mileage” has also been rife with inequity—even in this year’s race. Sophie Ciszek, another SCA crew member who is sailing in this year’s competition, has seen a difference in her role on women-only teams versus co-ed teams. “When I sailed with an all-female team, I had more responsibility,” she says. “There wasn’t the hierarchy that exists here. On this team, I’m definitely down the ladder more, which is fair enough because these guys have more experience.”

Caffari echoes the sentiment. “Generally, in my career I haven’t faced a lot of discrimination, but I found the Volvo Ocean Race to be really hard,” she says. “It’s just so macho. I sit up there at the press conferences and there are six male skippers and then there’s me. It’s not a group of seven skippers at all. I’m beginning to struggle with that, because by now I’m tired of pretending. It’s old school and a bit of a boy’s club.”

If anyone has earned their entry into that club, however, it is these women. Conditions aboard the 74-foot monohull racing yachts are intense, with just one shared bathroom hidden behind a small curtain for the entire team and cramped bunks (also shared). The teams sleep in open quarters in four-hour shifts—all the while with the boat pounding through waves in the world’s fiercest seas at speeds of up to 20 knots, with freezing water seeping into the hull. There are no doors for privacy, and each sailor brings just one extra set of clothes. Race legs can last as long as 20 days with nonstop sailing at full speed; the only showers the crew get are blasts of cold saltwater washing over them on deck. The stench in the hull has been described as unimaginable, and the hulls have to be disinfected in each port. And Brouwer, Caffari, and Ciszek have endured it all time and time again—and always with aplomb.

“It’s probably the hardest thing I’ve ever done in my life,” Brouwer says. “Every time, I say I’m not doing this again—and then here I am.”

Such passion has also led the women from team SCA to found the Magenta Project, a collective group of female sailors aimed at promoting and inspiring women in professional, high-performance sailing. Drawing further attention to the movement is the fact that, by the end of this year’s race—which culminates with a 700-nautical-mile journey from Gothenburg, Sweden, to the Hague that begins June 21—at least two female sailors are certain to have accomplished the ultimate goal of being the first women to ever win the Volvo Ocean Race. Still, the women say, the uphill battle remains.

“Whether we’ve changed the stereotype or any opinions long-term I don’t know,” Caffari says. “But I think it’s helped, especially at this elite level. The real test will be if it happens organically in the future.”

Dee Caffari holding her nose for the next wave.

Virgil Abloh to Be Celebrated in Nordstrom’s Latest Pop-up

March of the Cyborgs: the 59th Venice Biennale