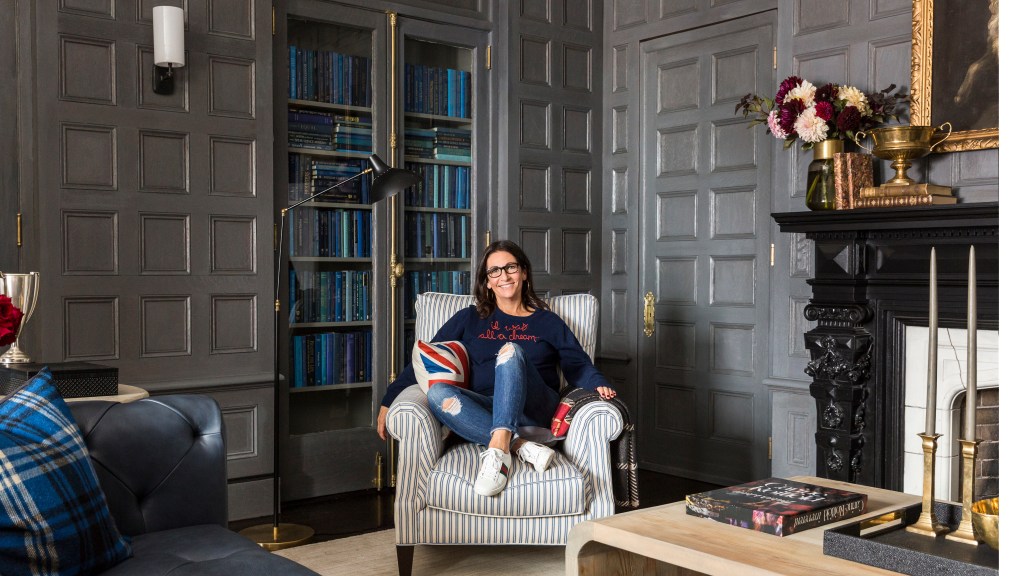 If there’s one thing Bobbi Brown knows, it’s makeovers. And, lately, the beauty icon has been making herself over. Less than two years after leaving Bobbi Brown Cosmetics, the forever stylish makeup mogul has reinvented herself as a wellness guru, with a new web site and wellness brand called Evolution_18. But she’s also added a surprising new title to her lengthy resume: hotelier.

In February, Brown, along with her husband (real-estate developer Steven Plofker), opened the George, a 32-room boutique hotel in Montclair, N.J. Is the makeover maven getting domestic on us? Not at all. Always the aesthete, Brown is extending her skillset to a whole new palette—that of an early 20th-century Georgian mansion. Muse caught up with the multitalented entrepreneur to talk career changes, cheap robes, and why you might just leave her hotel with a brand-new sofa.

How did you transition from beauty to hotels?

In 2016, when I told Steven that I was planning to leave my cosmetics company after 26 years, he said, “That’s just great, because I could really use your creative help on a project.” In all the years we have been married, he has never asked me for my help on any of his projects, so this was, for me, a challenge that I gladly accepted. He handled the inn’s structural overhaul and site’s architectural development, while I took care of all aspects of the interior design.

Tell us about the property. Had it been on your radar for a while?

Like so many of his development projects, Steven had acquired the 1902 Georgian Manse several years back with the thought of turning it into something. It had been built as a private home and for a while it was used as a rooming house. He was not sure whether it would be condominiums or a hotel of some sort. He eventually settled on the latter.

What about the location? What drew you to Montclair?

We have lived in Montclair for more than 30 years, and we’ve raised our three sons here. It’s 12 miles from Manhattan and, on a good day, it’s a half-hour commute. And over the years, the city has become a bit of a cultural destination. We have the Montclair Jazz Festival and the Montclair Film Festival, which is a pet project of Late Show host Stephen Colbert and his wife Evie. It’s an artful place to stay and there’s a lot happening here. You could say Montclair is the Brooklyn of New Jersey.

What guided your aesthetic choices for the George?

I would say the biggest influence was our many years of travel. Steven and I have traveled extensively, and we tended to stay at the nicest five-star hotels in every place we went until we realized that we really liked smaller boutique hotels that had personality and a little bit more of a one-on-one interaction with the people that work there. So, our main mission has been to turn the George into a place where we would want to stay.

On the outside, the George looks very much like an historic inn. On the inside, however, there are elements that are a bit more modern, almost industrial. I like the combination of the industrial elements with the old-fashioned elements. Each room also has a Nespresso, and the mattresses are by Casper. The robes are actually Ikea, which I think are the best robes, especially for the price.

You also give guests the opportunity to take these elements home with them, right?

Everything in the rooms at the George is for sale. Travelers who are accustomed to buying a bathrobe or towels from a favorite hotel now have the option of taking home a chair or lamp if they wish. Vogue’s André Leon Talley, who was in town for the Montclair Film Festival a few weeks back, checked out with a couch he simply had to have. We also have a pop-up shop within the hotel that offers our signature candle and room fragrance, as well as a new line of wellness products that we have just launched under Evolution_18.

Any plans to expand your hotel empire in the future?

One hotel is quite enough. But I am always open to possibilities, and I absolutely love the creative process.

A room at the George.

Helena Bonham Carter Says End ‘The Crown’ Now: It’s No Longer ‘Historic Drama’ and Should Not ‘Carry On’