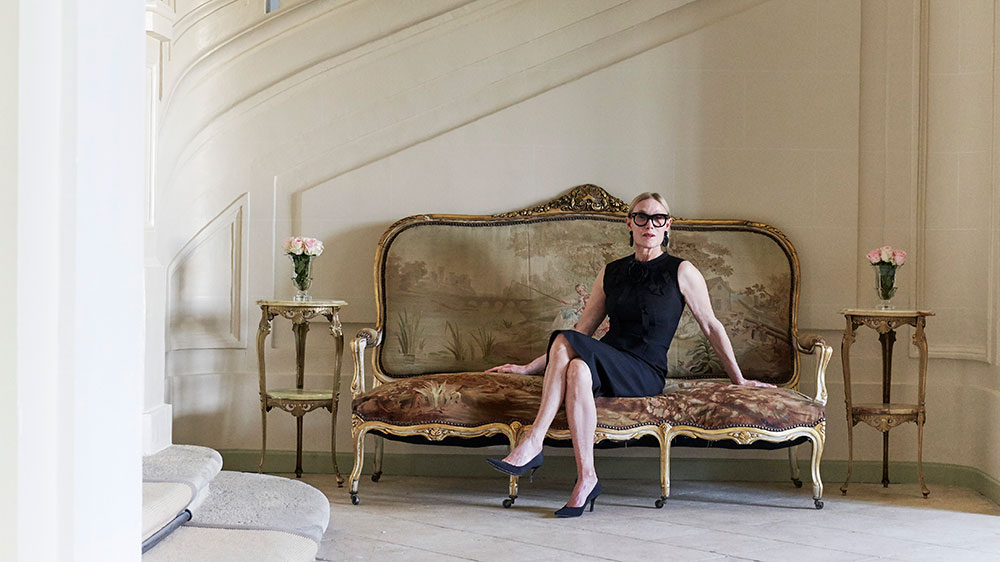 During the mid-1700s, back when neoclassicism was considered the height of modernity, Baron Jacques III Pineau de Viennay was quite the man of refined taste. As a confidant of King Louis XV, he partied with royalty—and had more than enough means to support his every indulgence. So it came to pass that he envisioned the Château du Grand-Lucé, an estate that would be the picture of moneyed excess.

The baron commissioned murals by Jean-Baptiste Pillement, classic chinoiserie paintings and boiserie walls. The king even threw in a few housewarming gifts—most notably, eight marble sculptures to grace the 80 acres of proper French gardens. It was to be, in no uncertain terms, the Loire Valley’s greatest modern treasure.

But when the property was finished some years later, the baron’s joy was remarkably short-lived. As the legend goes, he arrived at his new Xanadu for the first time, passing through the towering iron gates and beneath the carved pediment bearing his family crest, and dropped dead right there at the threshold. Perhaps all those years of aristocratic carousing had finally caught up to him. Or maybe the beauty of his own creation was just too much.

That was hardly the end of Château du Grand-Lucé. It had a long life after Pineau de Viennay’s untimely death, serving as a getaway for luminaries from Voltaire to Mozart and as a hideaway for the Louvre’s most precious artworks during World War II. But this year, the property will begin a new life, helmed by Marcy Holthus, a California-based investor and mother of five.

Though Holthus is separated from the baron by several generations (and at least a couple patriarchies), her vision for the château—which she plans to open as a hotel this June—isn’t so different from her predecessor’s.

The exterior.  Photography by Puxan

Wearing cat-eye framed bifocals and a white silk blouse, Holthus is entirely in her element inspecting the château’s classical gardens decorated with manicured boxwoods and topiaries. She fell in love with the estate by accident: In 2016, she caught wind that the interior designer Timothy Corrigan, who had been using the property as a vacation home for more than a decade, was considering unloading the hefty piece of real estate. After a bit of research, she was captivated.

“[The château] is older than America. Captain Cook hadn’t discovered Hawaii yet,” she says. “The history here makes me feel grounded. It adds relevance.”

So Holthus took a leap of faith, making her plea directly to Corrigan. She would turn the château into what may be the world’s most elaborate boutique hotel—not the sort of standardized accommodation that seems to be taking over the world these days, but the kind that, by her own description, “transports.”

“I feel like today we’re looking for a story and a sense of place. Where do we fit?” she asks. “There is a whole class of luxury traveler that can’t find what they’re looking for at the big-box hotels. I am the target market.”

Holthus’s storied acquisition—which she has been renovating for nearly two years—is the impetus for her new hospitality brand, Pilot Hotels. The name is a nod to her family’s competitive hobby of sailing. Just as pilots steer ships in dangerous waters, Holthus hopes to do her own trailblazing in the field of luxury hospitality, where she has frequently lamented a lack of authenticity. During stays at a reputed brand’s hotels in Chicago and Shanghai, for instance, she was surprised to find the same interiors at both locations.

With that in mind, Holthus aims to make Pilot the anti-hotel-brand hotel brand, creating curated properties for the most discerning travelers. When the château opens this summer, it will be the second hotel in her newly formed collection, joining the Washington School House, a 19th-century Park City, Utah, schoolhouse, which she transformed into a 12-room mountain retreat.

The property is another product of her love for a juicy backstory: The old limestone building survived the city’s Great Fire of 1898 and lived on as a dance hall before becoming a modest bed-and-breakfast. Holthus gave it a faithful restoration—with a modern twist—when she debuted it as her first hotel in 2011.

“Everything is intentional,” she says as she walks the grounds of her estate, which she has renamed the Hotel Château du Grand-Lucé. The baron’s former retreat is a mammoth 45,000 square feet, yet Holthus has reconfigured it to have just 17 guest rooms. The property’s stables—which once held that secret cache of Louvre masterpieces—have become a grand ballroom with custom Pierre Frey velvet drapes, herringbone floors and crystal chandeliers hung from 21-foot-tall ceilings.

“I want guests to feel like a nobleman in a nobleman’s home,” said Holthus.  Photography by Puxan

The chapel has become a bar and lounge, and the baron’s bedroom is now a suite that includes a private library and its own salon. The original Jean-Baptiste Pillement chinoiserie paintings—many discovered behind painted wood panels erected to hide them from Nazis—have been faithfully repaired.

But amid all that restoration is reinvention, too. Eighteenth-century portraits hang next to abstract French oil paintings from the 1950s, and a gilt bergère, located in one of the Pied-à-Terre Suites, has been upholstered in a vivid contemporary floral print by Jean Paul Gaultier. The chinoiserie paintings, meanwhile, are the backdrop to minimalist sofas by French furniture brand Roche Bobois.

A closer look.  Photography by Puxan

“I want guests to feel like a nobleman in a nobleman’s home,” says Holthus. “I’m also trying to translate the Baron de Lucé’s vision for the 21st century.” It’s as if the baron and Holthus are kindred spirits—with the latter evolving the work of the former. “I think we would have gotten along quite well,” she posits. Only, in this version of the story, the château’s master is sticking around long enough to enjoy it.

Sporticast: Eagles, Chiefs Reach Super Bowl in the Arms of an Angel