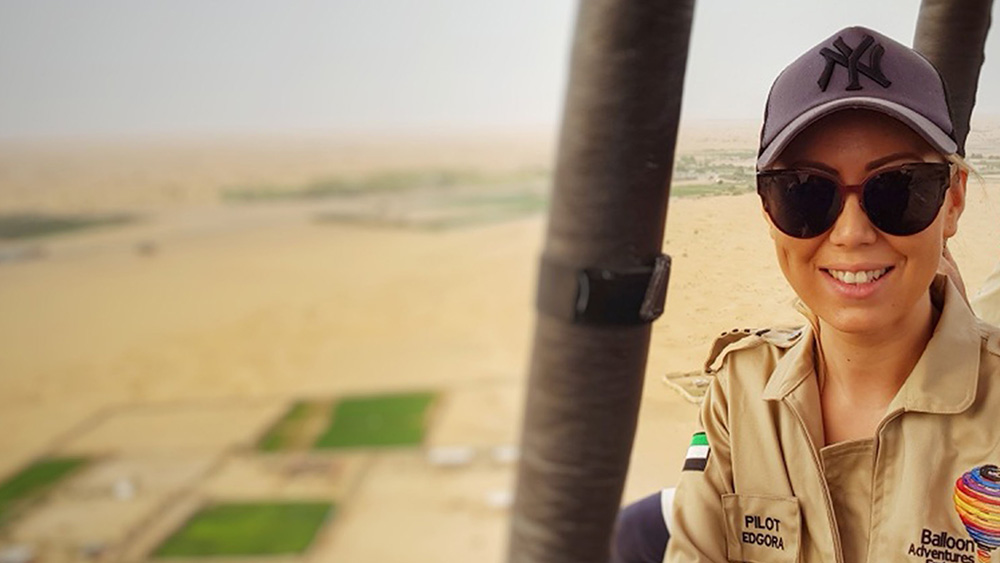 When 34-year-old Edgora McEwan moved to Dubai 16 years ago, she had no idea that she would become a groundbreaker as the first female hot air balloon pilot in the United Arab Emirates. The Uzbekistan native moved to Dubai and worked to build up her photography business, which she co-owns. After giving birth to her daughter in 2013 and son in 2015, she was working as a stay-at-home mother when her husband, Adam McEwan, purchased Balloon Adventures Dubai, a hot air balloon tourism company. McEwan took her first hot air balloon ride in 2017 and she knew instantly that she had stumbled upon her passion.

McEwan decided immediately that she wanted to learn how to pilot her own balloon. While she was able to use resources available to her through her husband’s ballooning company, McEwan knew that attaining this license would require hours of time and dedicated study. “I was very much encouraged by the pilots at Balloon Adventures Dubai,” said McEwan. “It took me two years to get certified after I took my first flight.”

After two years of training and hard work, McEwan now holds a private pilot license, which requires 16 hours of flying with a qualified instructor, as well as a documented solo flight. Instead of being intimidated by being the only woman to hold a hot air ballooning pilot’s license, McEwan used the potential of this landmark achievement as motivation. “I knew when I started that I would be the first female balloon pilot in Dubai,” she said. “And it made me feel great.”

In addition to flight time, the certification requires five theory exams on topics such as regulations and emergency procedures, as well as a monitored flight. McEwan also had to hit the gym so that she would have the physical stamina required to pull the ropes during takeoffs and landings. After completing all of these tests, McEwan was ready for the largest milestone of all: her first solo flight. In June 2018 in Mondovi she set sail. “It was unforgettable,” said McEwan. “Throughout the whole flight, I had such a great sense of achievement.”

In order to carry passengers alongside the other pilots in her husband’s business, McEwan will need to get her commercial license—a notion that hasn’t been widely accepted in the aviation community in the Middle East for very long. In fact, Emirates Airlines made headlines as recently as 2017 when it posted a video to its company YouTube page highlighting a female pilot and co-pilot on International Women’s Day. The Emirates Airlines duo broke barriers as the first female of Arab descent to fly the Airbus A380; and the youngest woman of Emirati descent to fly the aircraft, respectively. This, of course, is noteworthy partially due to the fact that there are still so many barriers that women are not permitted to cross.

Still, McEwan has no intention of stopping. “I will get my commercial license eventually, but for now I’m just enjoying the ballooning world,” she said. “I’m getting to know a lot of pilots and it’s just so incredible to have so many people around me who share the same passion.” And while there aren’t many women in the ballooning community just yet, McEwan hopes she can help change that.

“Flying balloons makes me feel very proud, strong, and independent,” said McEwan. “I hope I can use this to inspire other women not to give up on their dreams.”