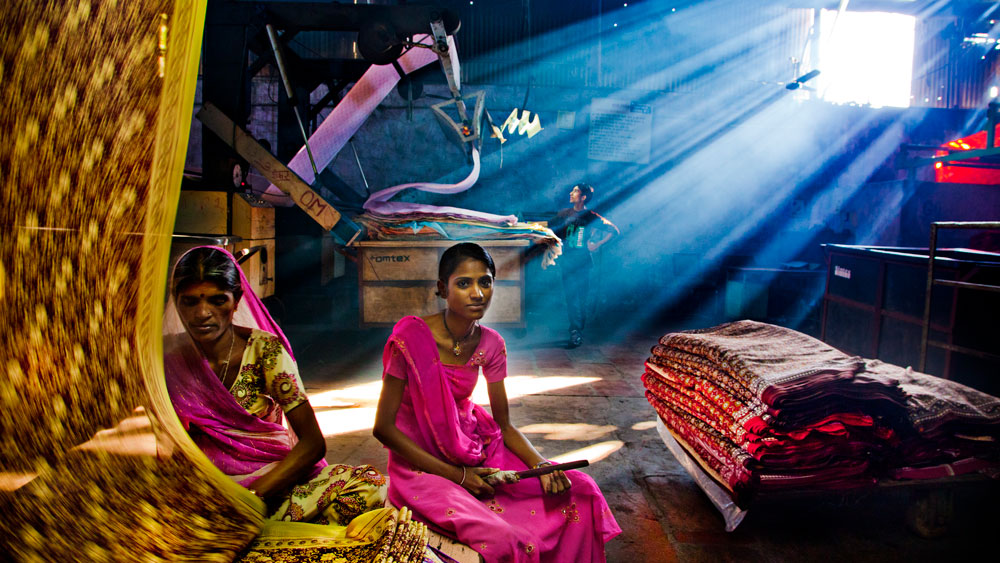 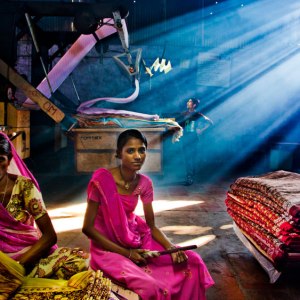 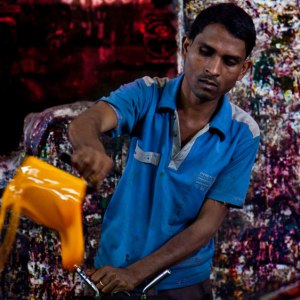 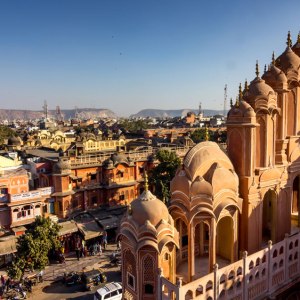 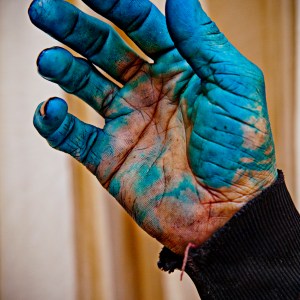 “Walk carefully,” my guide says, pointing down at my shoes. Crisp and white, my brand-new sneakers are clearly out of place in the textile-making village of Bagru, where every step is a potential minefield of color waiting to turn the stark canvas of leather covering my feet into a mosaic of vibrant hues. I tiptoe, carefully navigating through the indigo-, red-, and yellow-stained earth for only a few minutes before resigning to the fact that my efforts are futile. Nothing, it seems, in this tucked-away artisan community near Jaipur can exist without the exuberant touch of color.

Roughly 30,000 people call Bagru home, and on this warm January morning, nearly all of them appear to be busying themselves with their crafts. In the dyeing section of town, pits of pigment made from scrap iron, alum, wood bark, and herbs bubble up from deep vats in the ground. Barefoot craftspeople, their extremities already stained from the early hours of the day’s work, crouch over the vats with posture finessed from years of repetitive movement, submerging belts of fabric into the dye and laying them wide on long swathes of dusty earth. Dip, remove, dip, pile. I watch, suddenly conscious of my all-black clothing—another faux pas of colorlessness that clearly identifies me as an outsider—hypnotized by the precision of each swift yet careful step.

I’ve come to this mecca of textiles to learn about the centuries-old practices behind one of the world’s most famous centers of craft. India is indeed a magnet for design junkies like myself: A mythical, magical place draped in golds, pinks, and greens, this land of spices, silks, and handmade treasures is unlike any other. But I’m not content to simply visit the shops of Mumbai or Delhi, so I’ve enlisted the Boston-based outfitter Audley Travel to create an artisan’s trail of sorts, weaving from Bagru and Jaipur to Agra and Varanasi, to meet the makers behind the art.

In Bagru, that means wandering from workshop to workshop, examining miles of beautiful fabrics before they make their journey to the crowded boutiques of Jaipur and beyond. In the printing district, I watch members of the Chhipa community—an artisan caste that has been dyeing and woodblock-printing textiles since the 17th century—apply intricate designs with the exactitude of a machine. In a small atelier no larger than a railway car, I meet the block makers: a father and son, sitting cross-legged on the floor and hunched over makeshift lap tables with hammers and nails in hand. They transfer labyrinthine patterns from paper to teak and rosewood in ceremony-like silence, stopping only when I ask about an exquisite indigo textile.

In lieu of a response, the elder of the two—a man who, my guide explains, is largely credited with keeping the block-printing tradition of Bagru alive today—offers me a block etched with a diamond motif and a border of tiny leaves. He leads me to an outspread textile, and, without a word, I understand: It is my turn to try my hand at printing. I apply the pattern block by block, then stand back to inspect my work. Instantly I’m disappointed to see that it bears almost no resemblance to the perfectly patterned pieces all around me. I thank the men for their hospitality and point once again to the indigo beauty I had been admiring. Five yards, please.

Minutes later, my souvenir carefully folded over my lap, I’m watching the landscapes of rural India sweep by from the backseat of an SUV. The car swerves and sways—zipping past herds of camels shepherded by bearded men and merging with commercial trucks covered in vivid murals—until at last Jaipur comes into view. The Pink City, named for its plenitude of salmon-colored facades is hardly the quiet village from which I’ve come, but it’s no less rich in beautiful objects to adore. As the SUV idles on a busy street, I admire the tiny shops packed cheek to jowl with copper pots, elaborate bangles, and hand-painted pottery. Workshops overflow with more evidence of the talent hiding behind every door: giant slabs of marble carved into the sacred forms of Hindu gods, intricate jaali screens, and dazzling saris lined with glittering threads of gold.

Beyond the thick walls of the Old City, I discover more of Jaipur’s treasures at Samode Haveli, a royal mansion turned luxury hotel where the courtyards are enveloped in a carpet of dahlias, lilies, orchids, and geraniums and every nook is piled high with elaborate tilework and thick velvet. In any other destination, this level of too-muchness might seem ostentatious, but here, among the blushing pink buildings and legends of maharajas, it couldn’t be more fitting.

Indeed, outside of an artisan’s workshop, the best way to see the magic of India’s local crafts is from the inside of a hotel. Samode Haveli—which was first constructed by the Samode royal Rawal Sheo Singh 175 years ago—is a study in mid-19th-century extravagance with its woven damasks, Kashmir rugs, and hand-painted murals. The same can be said of Amanbagh, the pale pink sandstone property that I visit in the Aravalli mountains of Rajasthan, en route to Agra. Another palace—this one the former hunting estate of the king of Alwar—the 40-room resort is a blend of traditional Mughal architecture and Golden Age–inspired extravagances, with soaking tubs chiseled from local marble and the pervasive sound of melodic Bansi flutes. At the Oberoi Amarvilas, where nearly every window perfectly frames the neighboring Taj Mahal, I find some of the finest examples of Indian craftsmanship yet: handwoven tapestries, etched-glass chandeliers, gilded wallpaper, and jaali screens so precisely carved, they require a second glance. That human hands have created such detailed and meticulous works is difficult to fathom.

That is, until I arrive in Varanasi.

The dyeing factories of Rajasthan are brimming with colors and patterns.  Photo: Xavier Zimbardo/Getty Images

The loom master’s hands are the first thing I notice. Whittled by age and moving with the rhythmic flair of a pianist, they are gifted with the kind of dexterity that comes from decades of honing a craft. Here, in the legendary weaving district of Varanasi, where the country’s famous silks are copiously produced, one’s hands—tools, really—are everything.

I’ve only just arrived in this holy city on the Ganges River but already I’m under its spell, having meandered through its perplexing knot of alleyways and courtyards to reach this little house, where an old loom that stretches nearly wall to wall claps in a gentle rhythm. The loom master’s movements are deliberate yet swift as he works the thread back and forth with his hands and pushes the foot pedal with his feet. It’s a full-body performance, so quick and efficient, and after several minutes of watching, my untrained eyes finally identify the intricate pattern he is creating.

Such expertise is apparent at every stop. In another workshop, I find a barefoot man sitting on the ground with his legs outstretched, methodically working his way through a blueprint, using a hammer and metal puncher to transfer a design from paper to the Jacquard cards the loom master uses for his creations. And the designs for the blueprint? Someone makes those by hand, too.

Understanding the long—and long-standing—processes behind such rare and beautiful objects is perhaps as great a gift as are the objects themselves. Still, I have yet to find the perfect souvenir, so I wander deeper into the narrow alleys, mentally marking my way back out (left at the fruit cart, then straight until the blue-green temple) until a kindly shopkeeper beckons me inside with a cup of warm tea. One by one, he presents an array of silks, commenting on each in what little English he knows.

“Hand,” he says, then, “expensive.” It’s just what I’ve been looking for: silk made on the handloom—no motor, no hurry. I smile, pointing to the red flower on my dress, and with that, the yellow and blue are whisked away, and six different red silks flutter down. In India, it’s the color worn by brides, representing love, luck, and fertility—and it’s perfect. I buy 10 yards of a gold-speckled variety, then wend my way back through the alleys, for one last walk among the masters.