Looking for Robb Report UK? Click here to visit our UK site.
×
By Brandon Presser on May 6, 2019 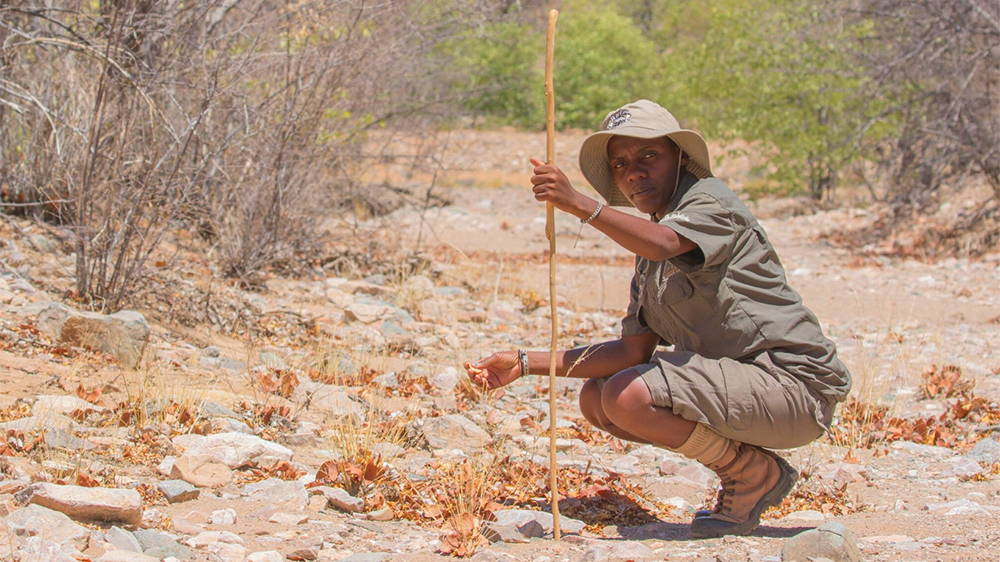 For 23 days of every month, Natasha Gomes lives in a military-grade canvas tent in the far recesses of the Namibian outback. Every morning before dawn she prepares her daily ascent through the thirst-wracked escarpments of the Kunene, a sparsely inhabited region roughly the size of Pennsylvania that’s home to the country’s population of desert-adapted black rhinos. As the sun ascends, she braves the extreme conditions while searching for animal prints in the dusty terrain, scrawling notes in her journal and snapping photos with her outmoded camera before returning to camp.

Gomes, 24, is the only female rhino ranger in Namibia, and—by her colleagues’ estimation—the only one in Africa. Along with her small cadre of trackers, she works for the Save the Rhino Trust, monitoring a small free-roaming subspecies in the northwestern part of the country. Since the tracking program began in 2016, Gomes has become intimately acquainted with her animals—she can recognize the kinks in their different footprints and markings on their backs. “I love Alfons the most,” she says. “He’s always the easiest to find because he’s the largest and the slowest.” Alfons was the first rhino Gomes ever saw, bursting into the rangers’ station on her very first night on the job.

Tourism dollars directly fund Gomes’s salary through Huab Under Canvas, a desert camp developed by Ultimate Safaris, one of the country’s leading tour operators. Ultimate Safaris has recently partnered with the US–based tour company Mango African Safaris to offer travelers the option to add a rhino-tracking experience with Gomes and her team into their safari itinerary. The company is also committed to helping support the local citizens of the Huab Conservancy. “Natasha has fast become a role model in the region” says Tristan Cowley, managing director of Ultimate Safaris. “She’s changing the way young girls are seeing their future.”

In addition to augmenting the rights of women in rural communities, Ultimate Safaris is addressing Namibia’s hot-button issue of rampant unemployment. While the country remains one of the safest places in Africa, its lack of job opportunities is among the worst in the world—almost half of the young-adult population is without a source of income.

“I want women here to rethink the stigma of being out in the field,” says Gomes. “It’s much safer in the desert where you can avoid the problems of being jobless in the townships.” Gomes also notes that ranger recruits require no previous experience to apply for a position on her team. All trackers are provided with a month of training before they’re stationed in the encampments.

Job creation that promotes wildlife preservation is, of course, a win-win in sub-Saharan Africa. “I firmly believe that rhinos will go extinct if we don’t continue to work as hard as we are right now—being out there every day monitoring their activity and staving off poachers,” Gomes says.

Taking field notes in the bush.  Photo: Courtesy of Huab Under Canvas

In the 1980s, more than 95 percent of Namibia’s rhinos were lost to poaching. Today, with the help of SRT and tourism-based initiatives like the one Gomes is part of, the population has rebounded from extinction and the country has become a success story for animal conservation with almost 44 percent of its land earmarked as concessions or reserves. Today, Namibia is home to more than one-third of the world’s remaining population of black rhino, and, according to Ultimate Safaris, not a single desert-adapted black rhino has died at the hands of a poacher since Gomes and her team started patrolling the Kunene.

Last year, however, Alfons passed away from old age. “He was my dear friend” says Gomes. “I miss him every day, but am so grateful that he got to live a full life.”