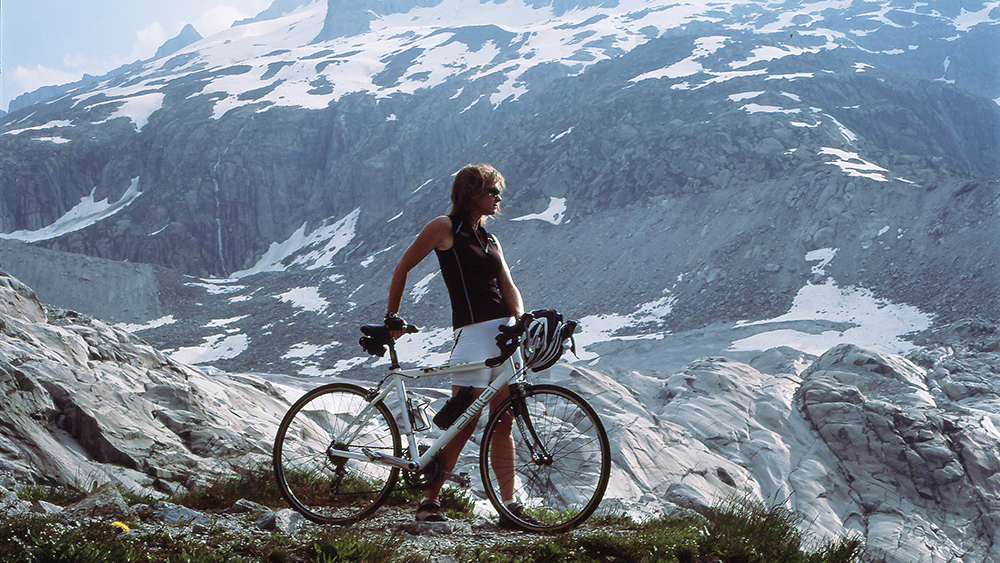 This is the first in a series of stories about women who are hardcore adventurers.

Standing barely five feet three inches, Danielle Stynes, the petite, blonde owner of SwisSkiSafari, is no longer offended by the sneers she receives from men on the mountain. In fact, she’s come to look forward to their skepticism just so she can prove them wrong. “I once led a group of investment bankers on a snowboard safari from one end of the Alps to the other,” she recalls. “They were insanely speedy and expressed concerns that I would slow them down. After outriding them the first day, one of them came up to me and humbly said, ‘We’re no longer worried.’”

Being small and female in the Alps, a region where mountain sports are still largely dominated by men, raises doubts. “I’m always going to be more fit than my clients because I do this every day,” says Danielle, who estimates she skis, snowboards, or hikes 185 days a year with clients and spends nearly every weekend of the off-season scouting new routes. “A lot of clients expect a strong superhero,” she says. “But as soon as they share an activity with me my sex no longer becomes an issue.”

When the tenacious Aussie started her company in 2006 the concept of a ski safari was novel. “People took a piss out of me and asked if they’d see lions and tigers,” she recalls. “After years of working in a geographical region where countries touch each other, I thought why wouldn’t you ski across borders and experience different cultures.” Danielle assembled a team of alpine gurus including, Robert Bolognese, an avalanche expert with a PhD in snow forecasting, and Roland Brunner, one of the region’s top helicopter pilots, and personally explored various routes by both ski and snowboard in Switzerland, Italy, and France. She then went about hand-picking the best rooms at five-star accommodations, like Mont Cervin Palace in Zermatt and Hameau Albert 1er in Chamonix, and hidden-gem restaurants.

“A lot of clients expect a strong superhero,

but as soon as they share an activity with me my sex no longer becomes an issue.”

“When I started skiing in this region, the guides would take guests to the same shitty restaurants,” she says. “They were probably paid to do so. I realized I had to improve things. Being a woman and then on top of that saying I wanted to raise the bar didn’t earn me any friends.”

Danielle, who lives in Anzère, Switzerland, halfway between Zermatt and Verbier, says being local is essential to creating authentic experiences. “My clients want the in,” she says. “You can’t give them that from an office in London. I spend a lot of time on the ground seeking out that little restaurant tucked away with no sign on the door that serves the best pasta you’ve ever tasted.”

The founder of SwisSkiSafari in her element.  Photo: Raymond Patrick

Week-long trips start at 1,500 euros (roughly $1,740) per person per day and she only books exclusive groups, working with just 80 people each year. Stynes prides herself on developing a rapport with each guest ahead of a trip. “I want to know how often they ski, what resorts they’ve skied, the equipment they own, how much sport they practice,” she says. While she gets her share of guy groups seeking James Bond–style heliski holidays, she says the majority of her clients are looking to push their physical limits by day and indulge at night.

“This industry specializes in intimidation,” she says. “I remember a trip where the guide landed the helicopter next to a 1,000-meter drop. I later found out we could have landed 100 meters away where there was no drop. When I asked why he did that he said he liked to scare people the first day so they respect him.” Danielle believes the key to respect is trust and encouragement. “When you take out the testosterone, the sport becomes user-friendly for all levels,” she says.

Three Contemporary Fashion Stores to Check Out in Dakar