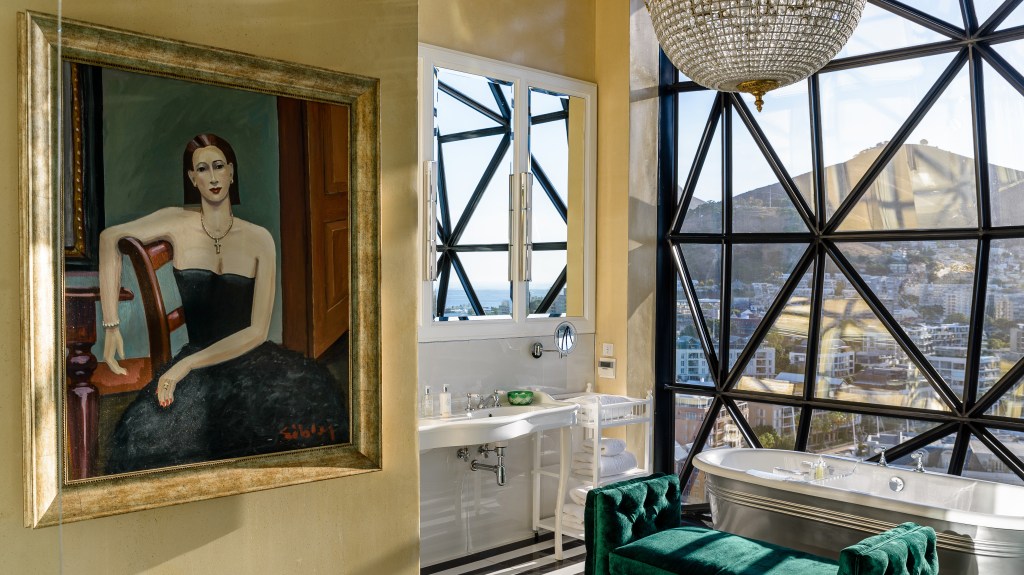 South African hotelier Liz Biden never does the same thing twice. For proof, look no further than the Royal Portfolio, her exquisite collection of hotels ranging from an opulent safari lodge to an art-filled city hotel set atop Cape Town’s new Zeitz Museum of Contemporary Art Africa. Her small but superb hospitality empire is anything but cookie-cutter: Each property is the result of years of accumulation of artworks, antiques, and custom designer pieces—all of which Biden personally oversees.

To be sure, Biden has expanded her hotelier role into plenty of new territory—she operates as a curator, a designer, and an avid proponent for the talented artists and artisans that hail from her country. Muse recently sat down with the jack-of-all-trades for a conversation about sub-Saharan Africa’s emerging arts and design scene—and her personal guide to the region’s most promising new artists.

Biden alongside interiors from the Silo in Cape Town.  Mark Williams

Your newest hotel, the Silo, is part of one of the biggest museum openings in recent memory: Cape Town’s Zeitz MOCAA. Tell us about that.

[Until recently], African artists had no platform to show their art, so it’s incredible that we now have this amazing museum. For so long, struggle art was the only art in Africa. Given the political changes in countries like South Africa, Zimbabwe, and Mozambique, African artists have become skilled at grappling with and addressing universal issues in ways that are highly engaging to the rest of the world. This art has long been coveted and acquired by collectors outside of the African continent. But with the opening of Zeitz MOCAA—and, more recently, the Norval Foundation—the collector base within Africa is starting to increase, which is even more exciting.

And the Silo is an extension of that, featuring its own collection of artworks. What are some of your favorite pieces?

At the Silo, we have been privileged to buy the works of some amazing young artists—and learning a great deal about the burgeoning contemporary African art scene in the process. I love Zimbabwean Kudzanai Chiurai’s We Live in Silence VIII-2 on the ground floor of the hotel. The leopard-print-wearing man puts a smile on my face every time I see it, yet it’s also thought-provoking. I’ve had to bear in mind that choosing art for a hotel environment is very different from choosing art for a private home—so some of [Chiurai’s] other work from the same series were too challenging for the hotel. Another favorite is Athi-Patra Ruga’s The Night of the Long Knives #4, which appropriates the Nazis’ bloody purge of their political opponents in reference to the post-apartheid rainbow nation—and whether it’s a myth that would burst like colorful balloons after Mandela died.

“My rules for buying art are simple: I always buy what I like.”

What trends have you noticed in contemporary African art?

Photography is definitely a trend, perhaps because it’s so accessible. Half of our collection at the Silo is made up of photography. A triptych by Soweto-raised Mohau Modisakeng [called] the Ditaola series was one of the very first works we invested in. We also have works by Capetonian Thania Petersen, a young Muslim woman who explores issues of identity through photographs of herself praying in a red dress. Artists are also experimenting with a lot of different media. Frances Goodman’s portrait, called Blue Velvet, involved a film shoot and eight seamstresses working with myriad different shades of purple and blue sequins to make up the piece. Goodman only makes a few pieces a year, because it takes so long to sew together each tiny sequin. Another talented artist, Jody Paulsen, uses felt in collage works.

What are your rules for buying art?

My rules for buying art are simple: I always buy what I like. I usually identify an artist that I admire—one who has promise—and then choose a piece that I really like. When I walk into any room, I always look at the art first. I’ve always had the ability to see the intrinsic beauty in anything, even if it’s covered in a film of dust at the back of a crowded storeroom. It holds true for furniture, too. I recently reinvented a pair of teak East African chairs by giving them a glossy finish with black lacquer paint and upholstering them in zebra skin. I’ve never had formal training, which means I can break the rules.

You also employ the work of African designers in your hotels, right?

I like to give all our hotels a strong African identity. Wherever possible, we support local manufacturers who can deliver the highest standards of craftsmanship. Local artisan Moorgas & Sons has been making and upholstering furniture for me for 25 years. I usually sketch something for Moorgas or show him a picture, explaining exactly what I want, and he makes it for me—quickly and brilliantly.

I travel a lot within South Africa and definitely draw inspiration from our many local cultures: their vibrancy, color, and energy. Collecting fabrics is something I do from Paris to Marrakech. I adore the African-inspired fabric ranges that have come out of Ardmore, which is originally known for its ceramics produced by Zulu women in the Dargle Valley in KwaZulu-Natal. Ardmore made fashion headlines when it collaborated with Hermès on a range of silk scarves and other accessories. I’ve used its fabrics on sofas, armchairs, and headboards.

What’s your next big project?

I’ve currently got five sets of architectural plans on my desk for lodges and family homes that are all in the works. Next up is an eight-tent safari camp in Gorongosa National Park in Mozambique. And my son, Matthew, is looking for a site in Victoria Falls where the art on display will have to be exclusively Zimbabwean, of course.