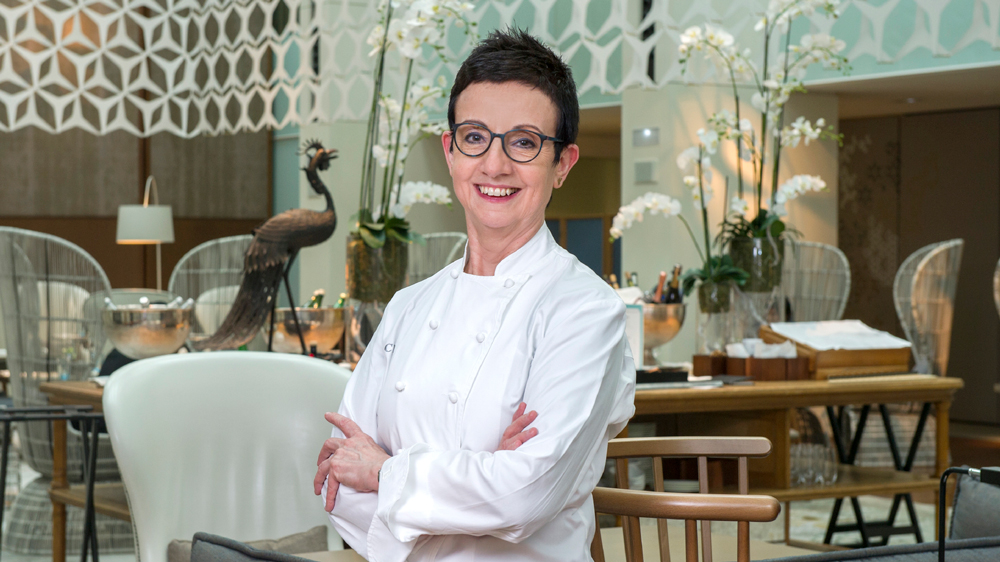 With a Michelin-three-star restaurant, a recent appointment as the “Gastronomic Advisor” to the top hotel in Barcelona (the Mandarin Oriental), and a new book debuting this month, to some it may seem like a strange time for Carme Ruscalleda, 67, to stop a great success in its tracks. But for the top Catalan chef, the moment is right, she says, to permanently close her restaurant Sant Pau, in the eponymous rustic, seaside town, after 30 years and seven Michelin stars amassed from the two locations in Spain and Tokyo. The announcement of Sant Pau’s closing hit the Spanish culinary scene like a bombshell—eliciting a reaction akin to the gasps that came when Ferran Adrià shut the doors of El Bulli during the height of its popularity.

Ruscalleda, who she describes her elegant cuisine as “modern Catalan,” has been a trailblazer for female chefs. “I have always felt that women and men have the same strength,” she said in an interview at her restaurant last month. And the gender balance in her kitchen speaks to that belief—half of her kitchen staff at Sant Pau is female. Moreover, Ruscalleda says she is a mentor to many female chefs around the world. “Women are slowly getting into the areas dominated by men.”

Her status as a trailblazer assured, Ruscalleda, the first woman to receive seven Michelin stars (the same number Thomas Keller has), nevertheless has never gotten wrapped up in the fame or in her gender. Instead, she’s remained laser-focused on executing her vision—transforming classic Catalan seafood in a modern, updated way that stays true to the original spirit. “I would want the local fishermen to be able to recognize the flavors,” she says.

“The liberty and freedom is to cook something in a different way, like bringing cauliflower into dessert.”

Ruscalleda says she defines her cooking as one “that takes liberties” and pushes the boundaries of what’s expected. With a tart, she may work, for example, with eggplant and has successfully incorporated beans into other sweet dishes.  “The liberty and freedom is to cook something in a different way, like bringing cauliflower into dessert.”

So how does such a decorated chef close out a restaurant with the stature, standing, and months-long waiting list of Sant Pau? If you are Ruscalleda, who started the restaurant as a modest deli shop with her husband in 1988, you construct a menu that’s an homage to the past 30 years—each course pays tribute to a different era of the restaurant. The dishes, Ruscalleda says, are supposed to evoke a time and a place.  “I want people to feel the history with my food. It’s like music. It brings you back to a certain time,” she says one sunny Wednesday afternoon in the back garden of Sant Pau.

A dish by Carme Ruscalleda.

On the multi-course menu for this tribute meal of seemingly innumerable courses (13, to be exact), she has curated dishes that are at once simple yet complex, such as cured dentex, with the texture of a buttery sashimi, in a beetroot vinaigrette.

One of the five dessert courses—yes, five—are handmade white-chocolate rose petals. Ruscalleda wanted to be a painter (and she continues to draw illustrations for some of her books). Her attention to color and composition comes through on the plate.  The physical space now occupied by the restaurant will become a culinary center, a place to study and investigate new techniques.  “I can’t just leave the restaurant to someone because it’s very personal,” she says.  “I want to leave at a moment of strength. I don’t want my dishes to be tired.”

Once a place where fisherman came to eat, Ruscalleda says she comes here for the “seafood philosophy and excellent product run by the Maulini family.”

A more modern Barcelona restaurant, Ruscalleda says she goes here for the 360-degree views of the city and the restaurant’s vast variety of seafood.

For Italian food, Ruscalleda heads to Rie Yasui’s restaurant for creative pizzas and other Italian fare.

This is the newest restaurant of Nandu Jubany, a darling of the Barcelona culinary scene. Ruscalleda likes it for the menu based around gourmet and seasonal products.

Run by Ruscalleda’s son Raül Balam, who trained at Sant Pau, the Michelin-two-star restaurant Moments in the Mandarin Oriental is a haven of creativity and themed menus, like a recent 12-course tasting that was an homage to the magic and beauty of the opera.

Via Veneto is a Michelin-starred gastronomic restaurant that Ruscalleda likes for “its great, family-run tradition in Barcelona.”

A small, sleek restaurant that is based on tapas portions to share, Ruscalleda singles it out for the creativity of chef Jodi Vila.

‘Wednesday’ Easter Eggs: Breaking Down All the Tim Burton and ‘Addams Family’ References