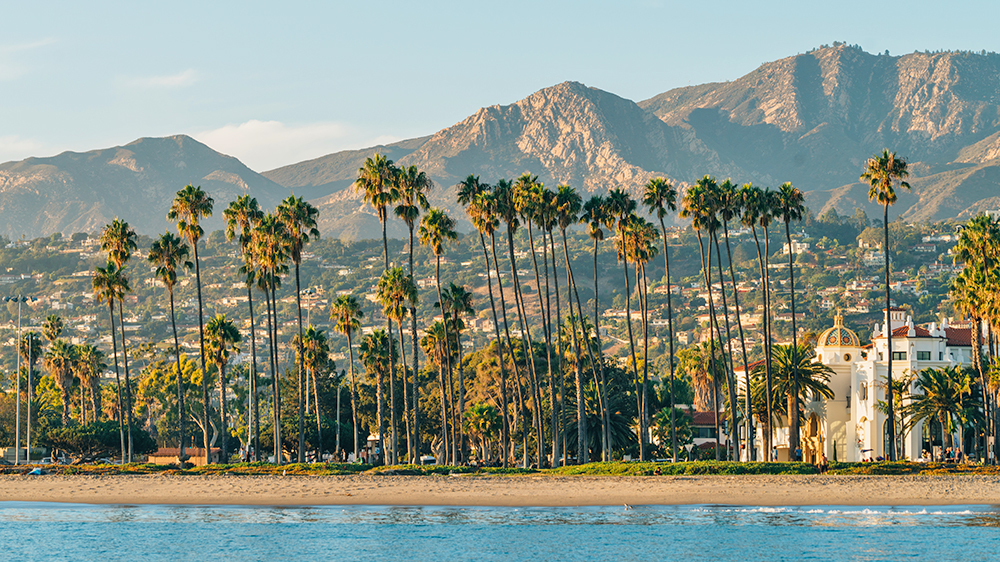 Brilliant sunsets, luxe resorts and lush vineyards are just a few of the reasons so many head north from Los Angeles to the American Riviera. Situated between the Santa Ynez Mountains and the pristine California coastline, the region, which includes scenic Santa Barbara and Montecito, could easily be mistaken for the flashy French Riviera, with its turquoise waters and golden sands.

But in 2017, the beloved region wasn’t quite the paradise native Californians have long adored: That December, the destructive Thomas Wildfire and ensuing mudslides threatened to destroy the getaway altogether. Eighteen months later, however, things are finally looking up as hotels old and new (re)open, and downtown Santa Barbara gets a hip new infusion of shops, restaurants and bars. Just in time for summer, these newcomers and old favorites reborn are once again making the American Riviera the perfect warm-weather getaway.

The new stunner on the sand is the oceanfront Rosewood Miramar Beach, which opened in March 2019. This gorgeous residential-style property took over the historic Miramar by the Sea, which had been around for more than a century when it closed in 2000. Now it’s a five-star playground for surfside lovers, complete with beachfront bungalows, two pools, a lavish spa, an ice cream shop, an outpost of cult favorite Malibu Farm restaurant and vast grounds with everything from a bocce court to outdoor treadmills. The hotel, which comes from the developers of LA’s The Grove, also as two exciting retail shops: Goop’s first hotel store (check the minibar for more Goop gear) and a new concept store by James Perse called the Gatehouse, where you can buy wooden surfboards, vintage chess boards and super-soft T-shirts that are exclusive to the hotel. Be sure to book a ride in the property’s pink Fiat Jolly car, a jaunty open-air beach mobile that shuttles guests into town.

Montecito has several other worthwhile properties, like the Four Seasons Resort The Biltmore Santa Barbara, whose guests can also use the exclusive, members-only Coral Casino Beach and Cabana Club across the road on Butterfly Beach. The hotel was recently refreshed after being closed for several months following the mudslides, and the new look comes with restored details from a lush jungle-inspired landscape and the intricate gold-leaf-painted ceiling beams in the lobby. The hotel is also debuting a new oceanfront suite this summer, which will feature a plunge pool, fire pits and two outdoor terraces on its oceanfront lawn.

Hidden just down the road is the famously exclusive San Ysidro Ranch, a member of the Leading Hotels of the World that reopened in March after being damaged by 2017’s mudslides. The old celebrity favorite has been carefully restored to its former glory by new owner Ty Warner (of Beanie Babies fortune, not to mention the Four Seasons Hotel New York). Its new look is every bit as charming as the old, with 31 vine-covered cottages—all with new furniture and updated bathrooms—plus a 12,000-bottle wine cellar and sprawling gardens that have at last begun to bloom again.

Further north on Highway 1 lies the Mediterranean-style The Ritz-Carlton Bacara, Santa Barbara, a breathtaking property nestled on the coast that encompasses 78 waterfront acres. Since it became a Ritz-Carlton propterty in December 2017 it has been undergoing renovations and improvements to its spacious lobby and soaring spa. The resort also has a new club lounge with VIP perks like all-day gourmet food, a wine dispenser filled with local bottles and dedicated concierges.

Over the last five years, Santa Barbara and Montecito have begun to attract chefs from larger cities looking for a more easygoing lifestyle—but in a location where people still appreciate a finely curated meal made with top-quality ingredients. In fact, Michelin Guide recently announced that it would include the Santa Barbara region when it releases its 2019 California guide this June. Until then, let this serve as your blueprint to the area’s finest fare.

Bettina comes to the American Riviera by way of New York City: Chef Brendan Smith met his wife and partner Rachel Greenspan when he was the head baker at Brooklyn’s famous Roberta’s pizzeria. The duo opened Bettina at the end of 2018, making naturally leavened pies, sourdough bread with house-cultured butter and fresh salads using local ingredients (except the olive oil—which comes straight from Tuscany).

Husband-and-wife chefs Phillip Frankland Lee and Margarita Kallas-Lee, who run LA’s Scratch Restaurants, have recently opened three new restaurants at the Montecito Inn. The Monarch is a comfortable hotel restaurant devoted to local ingredients, while The Silver Bough offers a $450 ($550 with wine pairings) chef’s counter experience sourcing some of the finest ingredients from California and around the world (think olive-fed wagyu from Japan, sea urchins from Santa Barbara and black truffles from Bordeaux). Meanwhile, at Sushi Bar, a 10-seat omakase runs 17 courses and features the area’s seafood bounty as well as fresh catches flown in from Tokyo’s Tsukiji Fish Market.

Chefs Lauren Herman and Christine Olufson met in the kitchens of Lucques and AOC in Los Angeles before deciding to move up to Santa Barbara to open Bossie’s Kitchen in February 2019. The duo serves sandwiches, salads and dishes such as grilled salmon with dill yogurt and a Sunday pot roast, along with a solid selection of California wines and craft beers.

San Diego’s cult-favorite brewer Modern Times has opened a brewery-restaurant in Santa Barbara. The 5,000-square-foot indoor-outdoor complex includes a restaurant and taproom anchored by Cubaneo, a Cuban restaurant from the team behind the uber-romantic and ultra-tasty Barbareño; Shaker Mill, a rum bar from the mixologists behind local cocktail lounge Good Lion; and Gear, a craft boutique.

Being sandwiched between the ocean and the mountains, the American Riviera has no shortage of scenic walks and hikes—an easy one is to walk along Butterfly Beach or its boardwalk, turning up the hill to stroll past mansions owned by the likes of Ty Warner and Kate Winslet. Or head to the Douglas Family Preserve (named for father-son movie stars Kirk and Michael, who donated the land) for stunning sea cliff and ocean views.

For a less active but equally dazzling activity, book a whale-watching tour or catamaran harbor cruise with Santa Barbara Sailing, or charter your own yacht or sailboat.

For a dose of the American Riviera’s architectural roots—the region was founded by Spanish colonists in the 1600s—head to the Santa Barbara County Courthouse, a truly spectacular example of Spanish-Colonial architecture that celebrates its 90th anniversary in 2019. Climb the stairs to the top of its clock tower to take in some of the city’s best views.

More Spanish culture can be found in August, when Santa Barbara holds its 95th annual Old Spanish Days Fiesta, a cultural festival that pays tribute to the days of Spanish settlement with food, music, dances and parades.

For a shopping outing, head to Montecito, which is home to a plethora of independent boutiques like Allora by Laura (whose womenswear is a cross between sophisticated European and laidback Californian style) and Jenni Kayne (an upscale concept shop that has everything from cozy knit sweaters to breezy Turkish beach blankets). Other favorites include Wendy Foster’s pearl-and-mixed-metal jewelry and Maison K’s chic monochromatic tableware.