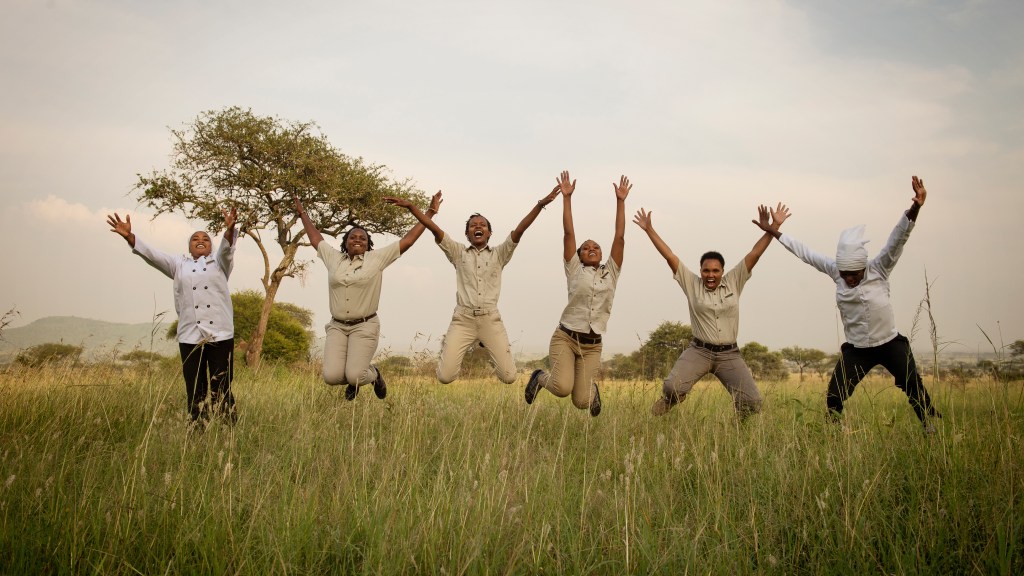 In the beginning, Angel Vendeline Namshali was the only one.

Five years ago, the Tanzanian native arrived at Asilia Africa’s Dunia Camp, a safari lodge in the heart of the Serengeti National Park, to find she was the only woman there. It wasn’t exactly a surprise—men have long dominated the safari industry, where the days are long and the work can be grueling. It’s rare to see a woman anywhere on the safari circuit, let alone one who’s calling the shots.

“Many people have this mentality that women cannot work in the bush,” Namshali says. “But I’ve always believed women can do anything that can be done by any other person in this world.”

Five years after joining Dunia, Namshali is living proof of her belief: Today, she leads an all-female team—her staff of 22 women includes everyone from the chefs to the guides to a group of hardcore askari security agents—at the safari camp, where she’s the Serengeti’s first female general manager. Here, the pioneering leader talks blazing trails and overcoming challenges in the bush—and beyond.

What was it like as a woman trying to break into this very male-dominated industry?

In the beginning, everything I did was very much scrutinized. When I was first moved to Serengeti, I managed an all-male team, and half of the staff were former poachers from a certain tribe in the northern Serengeti. This is when I had a big problem. Eventually, I had to fire two of the men, and after that things were better. The team finally came to understand that a woman can be a manager and started to respect me, and even protect me.

At Dunia, you manage an all-female team, including three guides. What is it like for them out in the bush?

Every day they have to prove people wrong. When they first started driving in the Serengeti, the male drivers would stop and stare at them. Some male guides were very friendly and respectful, but others would drive very fast, spreading mud on the women’s vehicles and covering their windshields. But more and more of the industry now supports us as their sisters.

“We are proof that women can work in any environment

if they are given the opportunity.”

The environment is so unpredictable in the bush. How do you deal with the uncertainty?

Despite all the close encounters with wildlife, I have never thought of leaving the bush. Here, we cannot feel scared—or else we will lose our jobs. Our families have improved financial status because we are able to bring home a guaranteed wage each month. So, we have to build confidence and assure ourselves that everything will be alright.

How do guests respond to an all-woman safari camp?

Most guests are puzzled when they find out that the camp is run by women, from managers to guides and all the service staff. They say it is like a miracle to find such a place in Africa. Some guests actually book Dunia specifically to see what women are capable of in the middle of the bush. And others don’t believe it until they see it with their own eyes.

How has the existence of an all-female safari lodge impacted the rest of the Serengeti—and Tanzania?

Because of what we’ve done, so many women are being given the chance to work in other companies. We have shown them the way. Society is looking to us, and I am so happy that people are pointing to me as an example. We are proof that women can work in any environment if they are given the opportunity. And now, the daughters of our generation will know that they too can do anything.