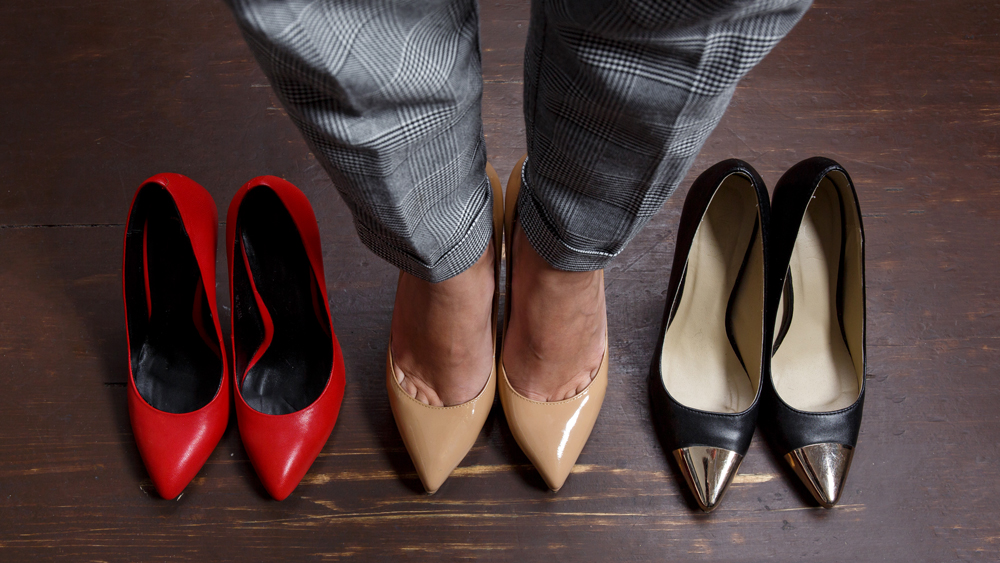 In the last century, we’ve achieved myriad technological feats, from moon landings and electric vehicles to smartphones and augmented reality glasses—yet somehow, women are still walking around in high heels that make their feet hurt.

“High heels are a matter of engineering, and if we had more women engineers, someone probably would have thought of making them more comfortable a long time ago,” says Dolly Singh, who founded LA’s Thesis Couture five years ago to do just that. Last year she released the company’s first four-inch stiletto heel, a metallic gladiator sandal that, while not quite a walking-on-air experience, feels at least as soothing to the sole as a wedge and looks fabulous. This fall Thesis Couture is revealing three new models, all of them more subdued than the original Olympus One (space-age name intentional) and highly suitable for office chic.

Singh’s revolutionary shoes don’t come cheaply; the retail prices range from $650 to $950. As with early flat-screen TVs and electric cars, the early model high-tech stilettos cost a lot to develop. In fact, rethinking high heels from the wearer’s perspective turned out to require a touch of rocket science. Singh isn’t a scientist or engineer herself, but fortunately she had friends at SpaceX, where she was the head of talent recruiting from 2008 to 2013, followed by two-and-a-half years recruiting for the virtual reality company Oculus VR (now owned by Facebook) while getting Thesis Couture off the ground.

From recruiting experts in leading-edge technology, she learned how an engineer approaches a problem that calls for a technological disruption. “First they take the thing apart to see how it works,” she says. “So I had a cobbler take apart a pair of high heels.” She saw that the inner workings consisted of a thin metal rod called a shank and a compressed cardboard sole; that was it. “The way it’s constructed, basically 85 percent of your body weight is pitched forward on the ball of your feet.” In asking male engineer friends to construct a design that would allow more of the body weight to rest on the heel, “I told them not to think of this as a shoe, but as building a chassis for the human body,” she says.

The result is a shoe with an exterior that is made in Italy while a tech supplier in Singapore makes the internal architecture, which includes a cushion comprised of a proprietary blend of thermal and ballistic-grade plastic polyurethane.

It has been a long haul, says Singh. Even once she had a perfected design and prototype, it wasn’t easy to find a shoe factory willing to do something so out of the ordinary and in a limited batch. And although she was able to get about $1.8 million in seed funding—with Salesforce CEO Marc Benioff, SpaceX engineer Tom Mueller, and BBG Ventures among the early investors—she anticipates that the next round of fundraising will be harder.

“I understand where investors are coming from on this,” she says. “If you’re going to invest in something, you want to understand the product. Then you can give the company a check and add value through your expertise.  But if no one has made high-tech high heels before, how is an investor going to add value?”

She is, however, starting to develop a following among people with expertise in what it’s like to walk in high-tech heels. The supermodel Beverly Johnson, for one, writes on Instagram: “I’m so spoiled now—I prefer my Thesis heels over everything else.…I can feel the difference in every step, and my body matters to me.”

Inside the Confusing State of DC, From Huge ‘Joker 2’ Paydays to the Search for Their Kevin Feige

The Best Affordable Studio Easels for Creating Your Next Painting