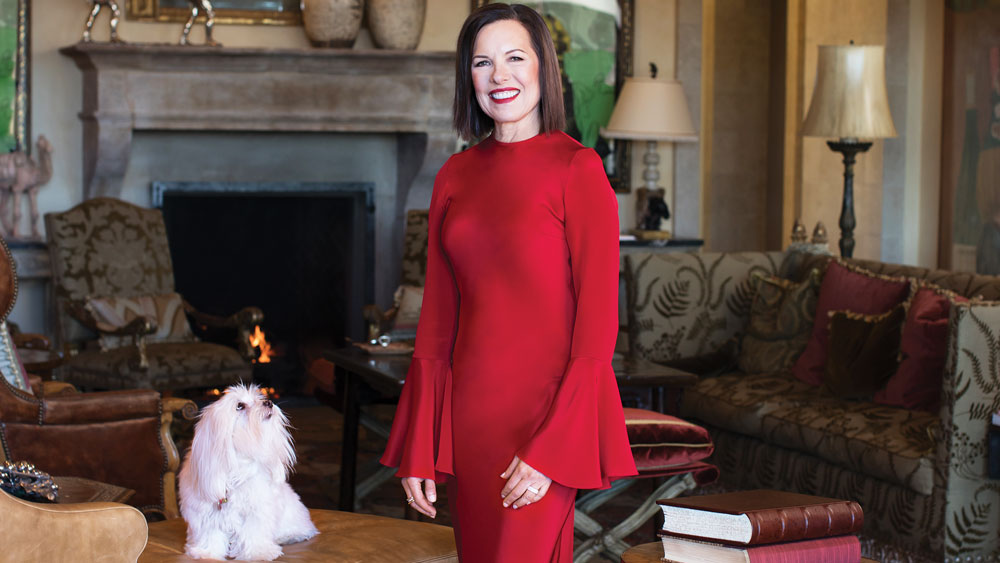 Ann Colgin and Bernard Arnault did not bond over wine. Instead, it was a mutual affection for modern art that sparked an immediate connection when the Napa Valley vintner and the chairman of LVMH first met last March in Paris. It was only a matter of time, however, before Colgin Cellars would come to the forefront of their budding friendship.

Three months later, Colgin and her husband, Joe Wender, hosted Arnault at their 125-acre IX Estate property in St. Helena, Calif., where the perfectly carved rows of plump Cabernet and Syrah vines are matched in beauty only by the WPA murals and objets d’art that decorate the winery. In summer, the LVMH team proposed a business partnership.

“Joe and I were not ready to sell,” Colgin says. “But partnering with a group that oversees the most successful and alluring luxury brands in the world was appealing to us.” So appealing that a deal was struck and papers were days from being signed when suddenly, in October 2017, the most destructive wildfires in California history broke out, devastating parts of the wine region

“The Napa fires were horrific,” Colgin recalls. “There were nights when we did not know if our winery would still be there the next morning.” Colgin hired a private firefighting team, led by a former smoke jumper, who patrolled their properties to guard against flying embers that could ignite new flames. Thankfully, Colgin Cellars’ employees and vineyards remained safe—as did the LVMH deal.

“If the winds had changed we might be telling a very different story,” Colgin says.

They ultimately sold a 60 percent stake in Colgin Cellars to LVMH while retaining their leadership roles and their team of COO Paul Roberts and winemaker Allison Tauziet. (The sale price has not been disclosed.)

Patience has served Colgin, who turns 60 this year, well in business. Her stellar-rated, handcrafted wines enjoy a massive cult following. Yet when she founded Colgin Cellars in 1992, she was a fine-arts expert in her mid-30s, with no viniculture experience whatsoever—other than having “tasted a lot of really good wines.”

Although still vastly underrepresented, female sommeliers, winemakers, and vintners are slowly gaining a foothold in the industry. “But back when I started out, it was very uncommon,” Colgin says. What she lacked in experience and opportunity, she made up for with a sophisticated palate and the pursuit of perfection.

Colgin’s earliest memories—she grew up in Waco, Texas, with epicurean parents—are of sitting in her high chair at her father’s favorite French Quarter restaurants and eating the maraschino cherries from her mother’s Manhattans. She studied art at Vanderbilt and at Sotheby’s in London, where she tasted a 1961 Château Latour and immediately fell for Bordeaux wines. She returned to the States and worked in the wine department at Sotheby’s, and guest auctioneered for Napa Valley Wine Auction, before eventually producing some of the best red wines to emerge from California.

“When people think about changing careers they sometimes get nervous about possibly taking a step back in order to do something new,” Colgin says. “I never think about it as a step back. Learning any business from the ground up is not a bad thing to do, because then you really learn a business.”

Today, Colgin Cellars makes four handcrafted wines: Tychson Hill Cabernet Sauvignon, Cariad Red Wine, IX Estate Red Wine, and IX Estate Syrah. The IX Estate Red, Tychson Hill, and Cariad wines have achieved several rare 100-point scores over the years, and the Syrahs have consistently received ratings in the 90s. Production is limited  to 3,000 to 4,000 cases per year, of which a large share is sold to a private, members-only mailing list (there is a waiting list), and the rest to top restaurants and specialty retailers in 30 countries.

Colgin obviously knows that exclusivity drives markets, whether it’s art or wine. But rarity isn’t her goal. Her approach—small production, gentle handling, attentive sorting, meticulous blending—hews more to artistry. “This is not a business where we could say, ‘Well, our wines are so popular, let’s just make more,’ because we’re so tied to the land,” she says. “We’re trying to make the best expressions of each of our fabulous vineyard sites.”

Even her wine boxes are fabulous. She wants every moment you spend with her wine to be pleasurable. The crates are smooth and silky with rounded edges—an antidote to all those rough-hewn wooden boxes that scraped her hands and broke her nails when she ran the West Coast wine department at Sotheby’s.

“It’s the greatest joy when we get emails from people about how they had this wonderful experience with one of our bottles,” she says. “Sometimes it’s at a Michelin three-star restaurant or it’s in their backyard grilling burgers.” Backyards around the world may be sipping more California reds thanks to the increased visibility that LVMH brings Colgin Cellars. The deal also allows her to increase vineyard acreage at IX Estate sooner than she’d planned.

Of course, time moves slower in wine country. When you select land, you’re building a hundred-year plan. When you establish vineyards, you’re planting for a bottle to enjoy 10, 15, or more years later. All of which makes the LVMH deal especially meaningful for Colgin and Wender. With no heirs interested in taking over the business, she knew they’d need a succession plan to ensure the reputation of their beloved terroir. By joining the LVMH family—which has proven success with historic labels such as Château Cheval Blanc, Château d’Yquem, and Clos des Lambrays—she found the perfect long-term partner.

“What I try to impart to everybody on my team is to do their very, very best. But to have fun while they’re doing it,” Colgin says. “I mean, we make a product that makes people happy. It’s sensual. It enhances your life. Like art.”

Emmy Predictions: Supporting Actor in a Limited Series or TV Movie – ‘The Dropout,’ ‘Dopesick’ and ‘The White Lotus’ Could Dominate the Seven Spots