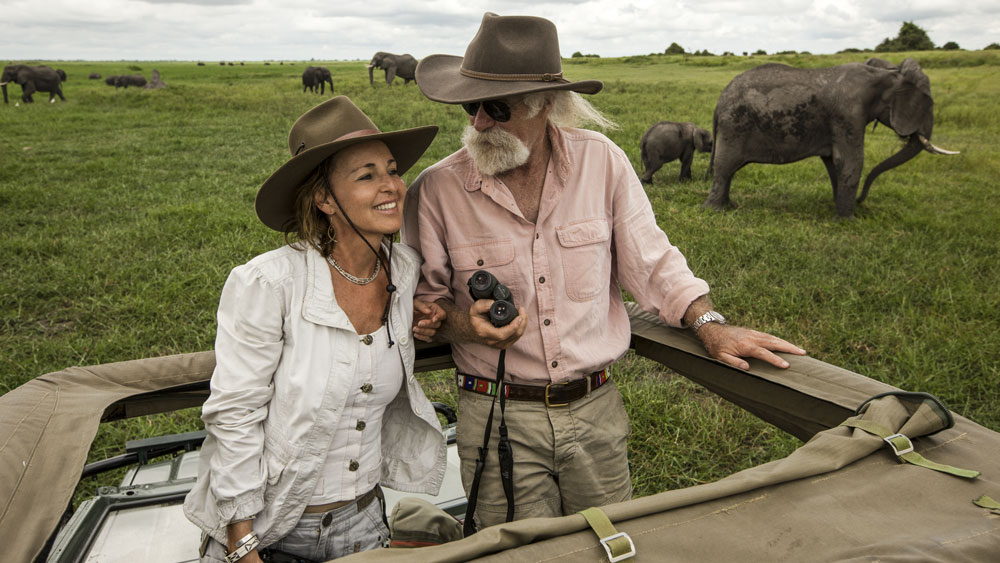 On the night of March 3, 2017, wildlife filmmakers Beverly and Dereck Joubert were walking through their camp in Botswana’s Okavango Delta when a Cape buffalo suddenly appeared and attacked. The encounter, which lasted fewer than 20 seconds, left Dereck with a cracked pelvis and Beverly with severe puncture wounds and more than 20 fractures and breaks. She lost nearly one-third of her blood before being stabilized at a Johannesburg hospital—18 hours later and more than 500 miles away. And yet, in the intense weeks in an ICU that followed, the lifelong conservationist spent most of her time wondering how she could help others.

“I felt an incredible urgency in what is happening to the planet—that there was just so much more to do,” Beverly recalls. “But at the same time, lying there, I found that I wasn’t only focusing on wildlife—I was focusing on the women of Africa.”

No one could ever accuse the Jouberts of being unclear in their convictions. Since their earliest days as filmmakers in the 1980s, the South African pair has put wildlife conservation at the forefront of everything they do. Their more than 25 films—works that include Eye of the Leopard and Eternal Enemies—have helped call attention to the survival struggles of Africa’s most iconic species. The Jouberts have also launched and championed a number of wildlife-protection programs, from Rhinos Without Borders in Botswana to the Big Cats Initiative, which they formed in 2009 in partnership with National Geographic.

Beverly captures the Kenya ivory burn in 2016. She is working on an exhibition of images for the protection of elephants.  Photo: Courtesy Susan Scott

Today, the Big Cats Initiative spans more than 100 projects in 27 countries, and Beverly estimates it has saved the lives of more than 2,500 lions and other African felines. Rhinos Without Borders, which the couple launched in 2014, has transported 77 of the endangered animals by helicopter from high-poaching areas in South Africa to safer zones in Botswana. “Everyone thought we were crazy,” she says. “But moving critically threatened species into protection is a very valid conservation method.”

Beverly, who is a renowned wildlife photographer as well as a filmmaker, cites rhinoceroses, lions, and land conservation as her and Dereck’s highest priorities. Through their Great Plains Conservation safari company (in addition to their creative and philanthropic efforts, the Jouberts manage luxury lodges in Botswana and Kenya), they have secured leases and other agreements with local villagers that protect 1.6 million acres in Eastern and Southern Africa. They hope to raise that figure to 10 million acres within 5 years.

The Jouberts, however, have a newly heightened awareness of yet another cause—one that owes much to their traumatic attack. “When I was in the ICU, I must have had over 30 different nursing assistants, highly trained assistants from South Africa, Cameroon, Nigeria, Malawi, Zimbabwe, Botswana—right through Africa,” Beverly says. “I started asking each of them questions about their lives, about what happens to them and their children in Africa. It really is quite bleak what happens to women of Africa, and I think that gave me the determination that we had to do more. The hardship in the communities is something no one from the West or even a slightly privileged background can remotely come to grips with.”

The Jouberts are totally comfortable in the company of elephants. This photo was taken while working on “Soul of the Elephant” for Nature on PBS.  Photo: Courtesy

Through Great Plains, the Jouberts have increased their investments in women’s issues, including education and skills development in rural areas. They have also launched such initiatives as a program that supplies solar lamps to remote villages, where the lack of electricity dictates that children study by candlelight—an inconvenience that can lead to devastating house fires.

The Jouberts’ interest in women’s issues extends to their primary profession, in which Beverly was a pioneer. “When I started, it was still quite a leap for me to get up on stage and introduce ‘our’ films,” she recalls. “Today, while women in film are still in a very small proportion, it doesn’t raise any eyebrows to read a woman’s name on a film as the director.”

Beverly credits her creative confidence to Dereck’s unflagging support—and to their adventurous lifestyle. “Perhaps because I have been excluded from the ravages of antifeminism—because of Dereck, and because of living in the bush—I have the more balanced view that we are already equal,” she says. “But if I sense a slight because I am a woman—or against another woman—I rise up like an angry lioness. I mean, I was impaled by a buffalo and survived, so a room full of men evaluating my pitch doesn’t scare me.”

Tiffany Is Collaborating With Pharrell Williams