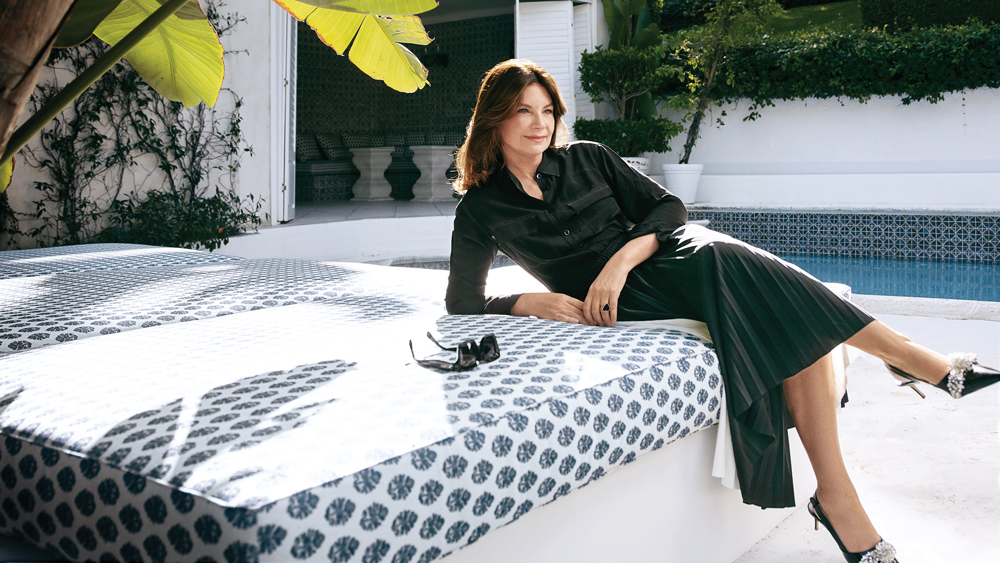 Muse by Robb Report is a new print and digital platform in which influential women—trailblazers, tastemakers, idealists, disruptors, and change agents—share their views and values on topics ranging from design, wellness, and philanthropy to the arts and wealth management.

Natalie Massenet does not heed barriers. During her time as a fashion journalist, she saw women struggling to locate designs they’d discovered in magazines. This launched an idea that became Net-a-Porter, an e-commerce juggernaut that defied the luxury industry’s objections about selling online and, since its 2000 debut, has transformed how fashion brands operate. As a former chairman of the British Fashion Council (a position she held for five years starting in 2013), Massenet noted a gaping hole in the fashion awards system, so she launched the Fashion Awards—a global awards program that replaced the former British Fashion Awards. Her cool demeanor at the 2016 announcement, at a breakfast at Soho House West Hollywood in Los Angeles, belied what had just transpired: The American, French, and Italian fashion awards would thereafter be regional prizes, while London’s would rule the world.

Massenet’s determination to improve the status quo is an ongoing mission. The Los Angeles–born Massenet, now 52, begins each January with a fresh diary in which she lists her major projects for the coming year. In 2017, these included “have baby.” In September, she checked that off with the arrival of her third child, Jet Everest Torstensson, a son with her partner Erik Torstensson, a photographer and entrepreneur who cofounded Wednesday Agency and FRAME fashion brand. Massenet thanked her surrogate in an Instagram post of her baby’s tiny fist.

“I can definitely attest to the fact that you can survive having a baby at my age,” says Massenet, who has two teenage daughters from her previous marriage. “It’s actually even nicer because you know how brief those moments are.”

Her juggle now includes serving as non-executive cochairman of Farfetch, an e-commerce venture that connects independent luxury retail stores and fashion brands with shoppers, a concept like Airbnb or Uber but for fashion. Massenet says she sees in Farfetch, which was founded in 2007 by entrepreneur José Neves, the opportunity to further her mission to connect designers with consumers who want to buy their most creative work. “José called me and basically said his plans for Farfetch were what I felt were the next obvious step for e-commerce,” she says. “He’s not a disrupter, he’s an enabler.”

Neves caught Massenet at an opportune moment. She had left Net-a-Porter Group in 2015, shortly after the company was sold and became Yoox Net-a-Porter Group. At that time, it was reported she sold her approximately $153 million stake in Net-a-Porter. Without a company to run for the first time since launching the portal in 2000, she had thrown herself into building up the British Fashion Council, but she remained engaged in the future of retail fashion. “She was very interested in the vision for Farfetch,” says Neves. “Natalie brings her incredible expertise in brand building and a love for customer experience with her, which she shares with our team here at Farfetch as we develop and build our brand.”

From the beginning of her shift to e-commerce, Massenet presented herself as a consumer advocate for the luxury sector. Working as a fashion editor at Women’s Wear Daily, W, and later Tatler, she saw the frustration of many women who were unable to locate the edgy clothes that appeared in fashion-magazine editorial spreads. Often, those clothes came right off the runway and
were never manufactured because they were deemed either too outlandish or too expensive. Massenet begged to differ.

At a time when industry logic held that people would buy books or pet products online but not expensive luxury goods, she went to friends, family, and angel investors to raise cash and to designers, asking them to allow her to put their designs on a website without, in those early days, paying for them up front. Tamara Mellon (then at Jimmy Choo) and Anya Hindmarch were first to agree. “Two women, mothers,” Massenet notes. “We’re risk takers, having that feminine outlook.”

As Net-a-Porter grew, the staff exuded Massenet’s take-no-prisoners approach to getting the newest, most directional looks before the department stores. Net-a-Porter buyers would enter a Paris showroom and needle a designer to produce theatrical runway pieces they had thought too outlandish or pricey to sell—zany $2,000 sunglasses, fully sequined gowns that cost tens of thousands of dollars. There might be only a few clients for such pieces, but with its global reach, Net-a-Porter could sell from Dubai to Shanghai or New York.

The website took an editorial attitude, with fashion shoots that were more like magazine spreads than Amazon.com pages. “It was turning a media platform into a shop, not the other way around,” says Massenet.

Robert Burke, now a business consultant, was an executive at Bergdorf Goodman, a rival whose executives bumped into Massenet and her buying team in Paris, Milan, and London. “We were always kind of in awe of her in the showroom,” Burke says. “At that time, luxury department stores were extremely full of themselves and refused to believe that some little Internet site could come in and make a difference.

“Natalie came in with no boundaries and great vision and great creativity,” continues Burke, “and she did what everyone thought was impossible.” He chuckles at a memory of getting access to a collection that Massenet had wanted exclusively for Net-a-Porter: “She was not messing around. She did not enjoy sharing exclusivity with other retailers. She was not keen on sharing, and rightfully so.”

Massenet with partner Erik Torstensson at Buckingham Palace in 2016 after receiving her Dame Commander of the Most Excellent Order of the British Empire.  Photo: Courtesy REX/Shutterstock

She recently started her 2018 diary, with a new list of projects that she describes as “shorter but bigger” than usual. Stay tuned for the debut of a venture capital business called Imaginary Ventures and for further developments at Farfetch, which inked a deal with Condé Nast last June to direct the media company’s consumers to shop on Farfetch (the deal involved Farfetch acquiring Condé Nast’s style.com shopping website).

Down the road, Massenet says, “I probably have a start-up or two under my sleeve. I’m putting those at the bottom of my list.”

Djokovic Deported on Eve of Australian Open, Flies to Dubai