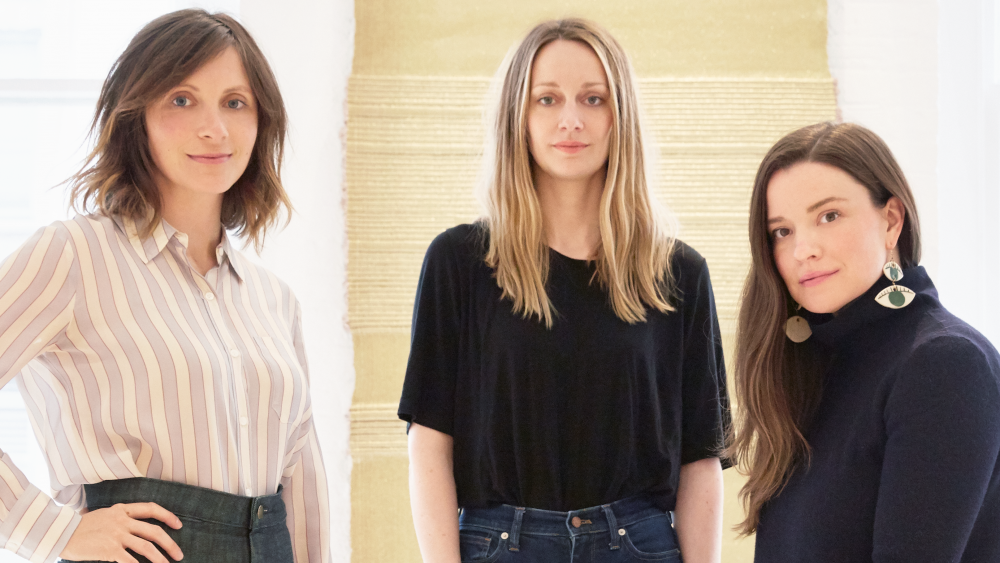 For Crystal Ellis, Hillary Petrie and Stephanie Beamer, it began in a basement wood shop. At the time, crafting furniture was a thing of both passion and utility, as the trio pieced together dressers and credenzas for their new apartments. But what began as a postgraduate pipe dream grew (or rather, hatched) into a fully realized design studio: Egg Collective. And the collective has since outgrown its basement digs, relocating to a fresh flagship showroom in Tribeca. But they’re taking that first credenza—named for their college professor, Julie Tolvanen, who afforded them the original space—along for the ride.

“Even back then we wanted to achieve a platform, and we wanted to be able to use that to elevate others,” says Ellis. “It’s always been a desire of ours, a kind of shared ethos.” A lofty ambition for the collective’s early days, perhaps, but one that Ellis & Co. has certainly delivered upon in years since. In 2017 and 2018, for instance, Egg Collective presented “Designing Women” exhibitions at NYCxDesign. Curated and hosted by Egg Collective, the annual event celebrates exceptional female designers and artists in New York City and beyond.

“We’ve come really far in terms of equal rights, but by no means are we able to sit on our haunches and be like, ‘oh yeah, we’ve reached the promised land,'” adds Ellis. “Maybe it’s not the biggest thing ever—we’re not politicians; we don’t have the megaphone that they have. But we have our own little microphone. And that’s something.”

Still, Egg Collective’s work speaks volumes. Currently on display is Material Matters, a presentation that brings together five artists who are pushing the boundaries of modern materials. The exhibition’s presence in Egg Collective’s showroom also cultivates a symbiotic relationship between art and design: Artworks gain exposure within the showroom context, and the studio accrues new pieces with which to zest up the space. All to say that the showroom is more lived-in home than white-wall gallery.

“I think because we’ve had to learn how to collaborate with each other, we’re pretty good at working with other makers,” says Ellis. “It’s a space where you get to see artwork in different contexts, rather than in a gallery. That’s interesting for us, and it’s also valuable for the artists who we’re working with.” Not to discount Egg Collective’s own furnishings. The studio’s in-house collection twists clean, geometric lines into playful asymmetries: from the Finn Table’s three differently styled legs to the Hornbake Sofa, a sectional whose cushions fit together like an off-kilter jigsaw puzzle.

Material Matters runs until August 23, but Egg Collective promises that it will continue to pay its dues to the design community—and the women in it—long after the current exhibition wraps. For instance, the studio recently partnered with the Female Design Council for Deeper Than Text, which spotlighted female designers at 1stdibs Gallery. And as far as their own space is concerned, Ellis hopes to use it as a tool not only to showcase their own creations, but to continue collaborating with and uplifting others. “We’re going to keep it fresh,” Ellis concludes. “It’s a new canvas.”