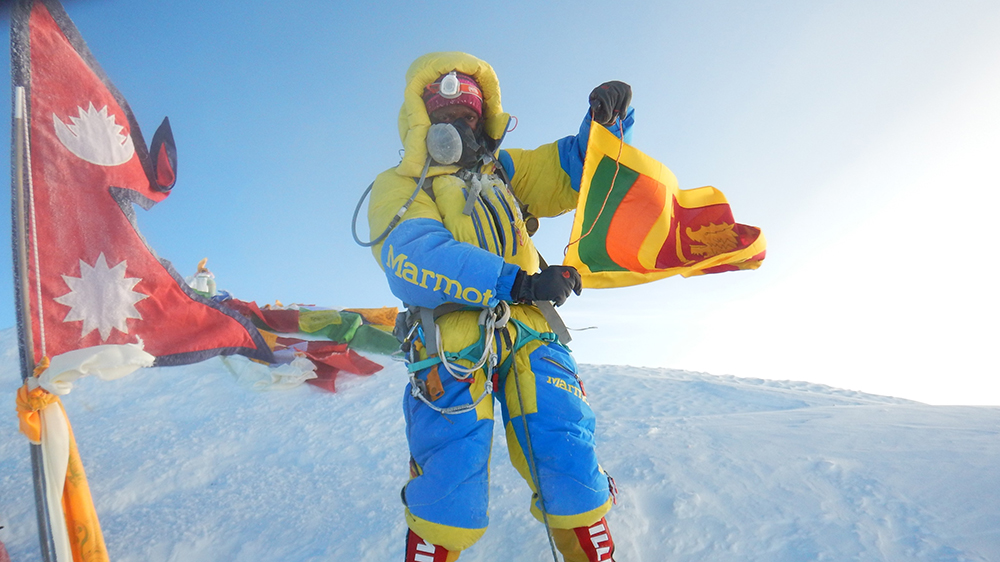 Jayanthi Kuru-Utumpala never set out to become the first Sri Lankan to summit Mount Everest. She certainly never intended to become the first female to achieve it either, but on May 21, 2016, after five grueling years of training, that dream became a reality. Already overcoming one of life’s greatest physical challenges, and succeeding where many have failed, Jayanthi’s accomplishment would go on to have greater implications. One small step for mountaineering, one giant leap for womankind.

Sri Lanka is only the fourth country in the world where a woman has climbed Everest before a man. Having spent most of her adult life campaigning for women’s rights and gender equality, this fact does not go unnoticed by Jayanthi. “In mountaineering there are no category distinctions between male and female. Nature doesn’t discriminate—either you climb it, or you don’t,” she says matter-of-factly. But, despite being irked by the media’s obsession with labeling female sporting achievements by their gender category—she herself often being referred to as ‘the first Sri Lankan woman to ever climb Everest’—it is a distinction that she is now happy to make in order to challenge gender stereotypes.

“I didn’t originally see the distinction, because it was a whirlwind experience for me. But after a few months, I realized that actually this attempt to always introduce me as a woman was a form of undermining my achievement. It implied that I was only the first woman, and that someone else had already done it.”

While the majority of responses to her climb have been positive, she has at times been accused of having “emasculated” or “shamed” the Sri Lankan male population with her achievements. At the time of our speaking, the IAAF’s sex-testing ruling over South African middle-distance runner and medal-winner Caster Semenya had just been passed, an outcome that infuriates Jayanthi. “This whole case shows how sport is patriarchal,” she says. “Who decides that testosterone is what gives you all the power? That hasn’t been biologically proven.” Semenya possesses both X and Y chromosomes—usually indicating a male chromosomal pattern—as well as high testosterone levels.

Petite in size at just five feet, one inch tall (and forced to wear children-size mountaineering clothes and shoes), Jayanthi herself has had her physical capabilities and gender called into question. “A lot of people are shocked that someone my size can do this,” she says. “On top of that, I don’t look like a stereotypical Sri Lankan woman. I’m not particularly feminine, I don’t wear makeup or jewelry, and I have short, spiky hair.” A naturally private person, Jayanthi is also undeniably feisty and eloquently exuberant. She brushes off such criticisms with a withering “I pricked your ego—sorry, dude, just deal with it!” and focuses her attention on the global female response, which has been overwhelmingly supportive. “So many young women take selfies with me to show their daughters that women, too, can be strong,” she says.

Jayanthi grew up in Colombo with her elder brother, learning to climb the avocado and coconut trees in their back garden. “It was my father who taught us how to climb,” she remembers. “We were not discriminated based on our gender. We were both given the same opportunities, and I’m really grateful to him for that. I had that space, which I know many girls don’t have the same access to.” Since forming her local rock-climbing group, which hosted a women’s-only workshop on Women’s Day in 2018, she has seen a 50-percent increase in women taking part in the sport.

Spurred on by her own experience, Jayanthi has been part of Sri Lanka’s women’s movement since 2003 and has welcomed the public platform that her sporting prowess has awarded her. In 2017 she was appointed as the Goodwill Ambassador for Women’s Rights in Sri Lanka, a newly created three-year post and the first time the ministry had ever had such a position. She has also been involved with the Women of the World Festival since 2017, and now forms part of the global team tasked with ensuring gender equality is a primary focus of the event. She currently works with NGO Care International on its global team providing strategy and leadership on programs preventing gender-based violence throughout the whole organization, as well as being immersed in a smaller project in Sri Lanka that looks at technology-related violence against women, girls and trans people. “We’re creating a database and a platform where people can report this violence, and in a sense create a space to document cases so that we can advocate for changes with the government and demand that laws be strengthened,” she says.

For Jayanthi, Everest has given her the opportunity to unite her two passions, gender equality and mountaineering. “If someone is able to hear my story and realize that I’m just a normal person who climbed a big mountain, then that will hopefully inspire someone else, especially girls, to follow their dreams, whether they want to be a neurosurgeon or rugby player, it doesn’t matter,” she says.

Accepting invitations the world over to spread the word about her experience within schools, universities, the corporate sector, the military and government, Jayanthi has been tackling prejudices and discrimination head on ever since. One such invite took her to a rural government-run school in Sri Lanka where the sports teacher habitually told the children that “boys are always first, and girls are always second.”

“I was furious and horrified,” she says, “but for me, at that point, I was just relieved that these preteen girls could now understand that what they’d been taught was nonsense because of my story.”