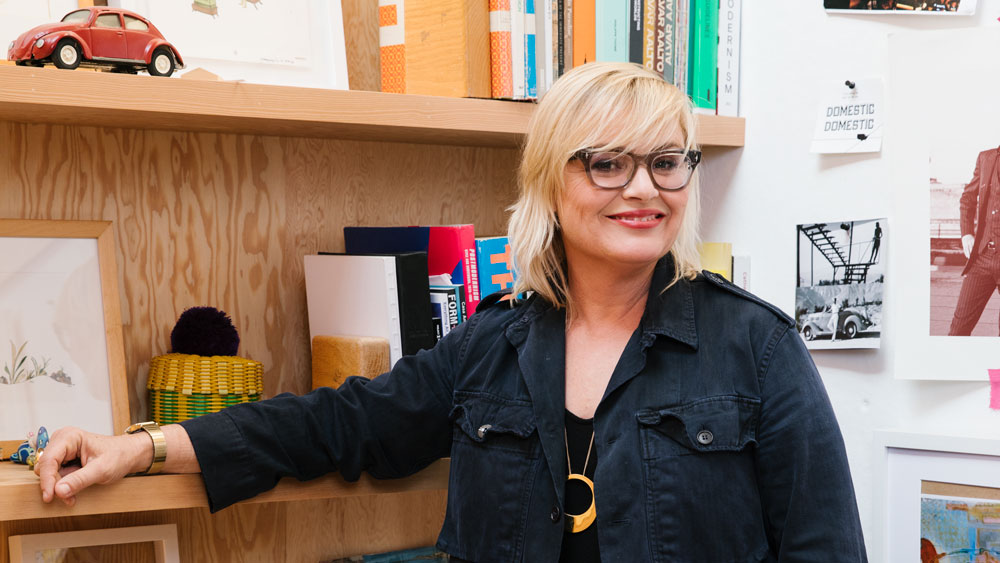 One evening each year, architect Barbara Bestor opens her Los Angeles office, housed in a former warehouse, for a party-slash-art-gallery shindig with her friend Jon Huck, the composer and artist. The well-attended event leaves the Silver Lake neighborhood short on parking and is a draw for an eclectic circle of L.A. music-, film-, and design-industry creatives for whom Bestor often serves as a super-connector. “It’s my way of seeing people I’d not otherwise see for years,” says Bestor. This past December, actor John C. Reilly chatted around a corner from Beats Electronics president Luke Wood; writer-director Jill Soloway, creator of the Amazon series Transparent, mingled as Huck sold his drawings; and the gregarious Bestor pressed to get the dancing started.

Bestor has been practicing her craft in Los Angeles since 1995, long enough that her particular focus—giving a human, affordable scale to modern urbanism—has made a mark on some trendy parts of the city. Los Angeles is home to such Bestor-designed establishments as two Clare V. boutiques and the Silverlake Conservatory of Music. Signs of a Bestor design: ample natural light, splashes of bold colors, and doorways that invite exploration.

A graduate of Harvard University and the Southern California Institute of Architecture, Bestor has designed homes for Soloway, Michael “Mike D” Diamond of the Beastie Boys, and Sonic Youth’s Kim Gordon, making a name for herself as a creator of livable spaces—stylish environments built specifically for how people live. The fashion designer Trina Turk is such a fan that she has enlisted Bestor in designing her home, office, and several stores. On Wood’s behalf, the architect recently completed a renovation of Silvertop—widely considered one of architect John Lautner’s midcentury masterpieces—for which the Beats executive reportedly paid about $8.5 million back in 2014. The home, now occupied by Wood and his wife, Sophia Nardin, hosted the Los Angeles Conservancy’s annual gala in October.

“She builds things on a human scale,” says L.A.-based artist Geoff McFetridge, a longtime collaborator of Bestor’s who is known for his work on the title graphics for such films as Her and Adaptation. “When you go in her houses, your first impression is how livable they are.”

Indeed, Bestor is making an impression. She was recently named to the 2018 AD100, Architectural Digest’s compendium of architects who share what the magazine calls “uncommon vision.” AD points to Bestor having “conjured a multitude of innovative residential, commercial, and institutional projects,” and her work on office design is notable. It focuses on eliminating the dreaded gray 1990s office cubicle and establishing collaborative spaces, which she created in her own offices, for example, with banquet seating in a large, open eat-in kitchen.

In 2015, she won the prestigious American Institute of Architects (AIA) Honor Award for Interior Architecture for the Beats by Dre headquarters in Los Angeles’s Culver City, with a concept that created, around a series of light-filled courtyards, workspaces designed for peaceful, active, and executive-level functions. And earlier this year, Snap Inc. employees moved into a Bestor design located in a Los Angeles area corporate office park.

As with the Beats headquarters, the Snap project puts Bestor’s humanist approach into three dimensions. The plans involved turning the existing decades-old building into a collaborative hive where employees can seek out spaces to work jointly or alone, as projects demand. Informal café areas are furnished with banquet seating where people can comfortably chat. “All the work space is calm,” Bestor says, “and the meeting areas are busy.” Colors sparingly used but invigorating—yellow steel beams, a bold green bathroom floor—counterpunch the softly organic interiors, such as undyed wool carpeting that has been woven to imitate the look of sisal. “We wanted it to feel more naturalistic,” she says, “because it’s such a mechanical building.”

In Northern California, at the Ashes & Diamonds winery in Napa, Bestor created a human-scale hospitality area that incorporates the sensibility of “hygge”—a Danish term for a Scandinavian sense of coziness or well-being—that the winery’s founder, Kashy Khaledi, sought. It’s common for Napa Valley wineries to boast soaring ceilings and vast tasting areas, but Khaledi was inspired by midcentury wines like Inglenook and wanted architecture to augment that era’s look and feel. Bestor installed low-slung 9.5-foot ceilings, “which I think sets a new record for low ceilings in Napa Valley,” Khaledi says. “It feels like a living room.” Douglas fir woodwork insulates sound like a recording studio, he says.

Bestor also has a knack for turning friends into collaborators and for building connections through the network she reinforces with her annual parties. She met McFetridge, the artist, in the mid-1990s when he was art director for the Beastie Boys’ magazine Grand Royal, which was located near her studio at the time. She recruited him for her own projects, including doing illustrations for her 2006 book Bohemian Modern: Living in Silver Lake.

“Barbara is like a [film] director,” says McFetridge, who has created wallpaper and other materials for Bestor’s projects. “I don’t want to work for architects. I want to work for Barbara.”