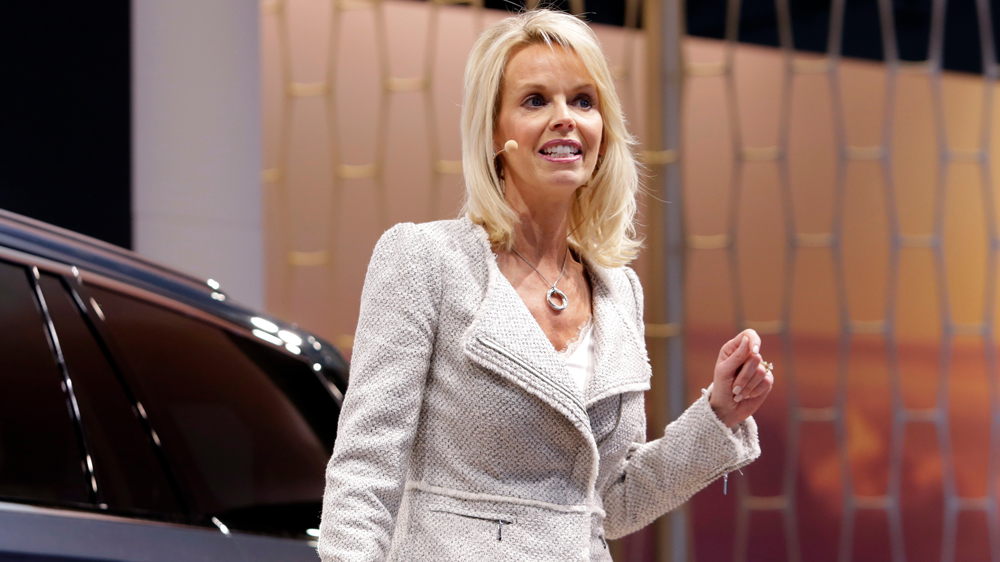 Lincoln Motor Company vice president Joy Falotico sits at a table at the Lodge at Pebble Beach on a chilly August evening, reminiscing with dinner guests about old cars. She and her female communications manager both laugh when they discover they share similar memories of starting their engines by popping the hood and sticking a pencil in the carburetor. “I remember doing that!” Falotico exclaims. “My brother taught me how.”

Earlier this year, Falotico was named head of the Lincoln brand after serving as CEO of Ford Credit, the manufacturer’s financing arm, where she worked her way up from her first position in 1989 as a customer-service representative. A Missouri native, Falotico grew up in a family that owned Fords and Lincolns, and her lifelong passion for the brand is evident as she describes her old Ford Probe and her favorite incarnations of the Mustang (for the record, she’d take the all-new Bullitt).

I first met Falotico in March at the bar at the Park Hyatt in New York City, where she greeted members of the media on the eve of the New York Auto Show. No sooner had Falotico and I said hello than we were interrupted by a 60-something male newspaper reporter, who stepped between us and asked, “So, how will you handle being president of Lincoln after coming from the credit side of things?” Falotico looked him squarely in the eyes, smiled, and replied, “I’ve been with the company for 29 years and have been sitting in all the same meetings as Mark Fields (the former Ford CEO) and other executives.” She explained that having formed relationships with dealers and consumers during her tenure would be an advantage in her new role. Satisfied, or maybe at a loss for words, the journalist meandered back to the buffet table. No less than five minutes later, another similar type approached Falotico and asked the same question. And, just as before, Falotico smiled and gave the same answer politely, patiently, and unapologetically.

“I grew the most when people would say to me, ‘Joy, what do you think?’…And it wasn’t a test, it was just inviting me to help develop the solutions, and they’d give me feedback.”

Coming up through the ranks in an almost entirely male-run industry, Falotico says she made it a point throughout her career not to focus on the fact that she’s a woman.  “I always had the approach that as long as I paid attention to moving the business forward and didn’t pay attention to the dynamics in the room, I was going to be more successful.” Falotico says she also benefitted from male mentors who encouraged her to speak up. “I was lucky enough along the way to have men who saw the opportunity to develop me and saw what I could provide. I grew the most when people would say to me, ‘Joy, what do you think?’ Or, ‘Joy, what would you do?’ And it wasn’t a test, it was just inviting me to help develop the solutions, and they’d give me feedback. Very early in my career I didn’t have the answer, and I’d go away and think about it, and having the time and the encouragement to do that and come back with an answer helped my development at a very young age.”

As chief of Lincoln, Falotico is taking the reins at a time when the American luxury brand is in the midst of reinventing itself. Nearly all of Lincoln’s product lineup has been replaced or refreshed with fresh, elegant designs penned by design director David Woodhouse and his team. Falotico has said that her first priority is to continue to build on that product lineup. The midsize Nautilus SUV is launching later this fall, and the larger Aviator is scheduled to go on sale next year. But another focus is expanding and redefining what luxury means to today’s buyer.

“Lincoln isn’t just about product, it’s also pairing that with services and making things effortless,” Falotico says. “Working with our dealer body, understanding the benefits that they bring to the table, but also understanding what our customers want and working with them on their journey is something that I’m passionate about.” To that end, Lincoln offers remote pickup and delivery for test drives, purchases, and service appointments, and those who opt for top-of-the-line Black Label models get access to personalized concierge services, complimentary car washes, and upgraded maintenance plans. All new Lincoln buyers get a free trial with Clear, whose members can bypass lines at airport security. “We’ve also leaned into Les Clefs d’Or, a hospitality institute here in the United States, to help us develop our training for our dealers to know what a luxury client expects. What they are looking for. We do a lot of ethnography research on our customers … we spend time with them to understand how to surprise and delight them.” Falotico gives examples of dealers leaving birthday gifts in the seats of their customers’ cars, or ordering dinner for a busy family whose vehicle is in for service.

Falotico has been doing her own kind of research throughout her career, carefully watching those in roles above her to see how they operate and responde to challenges. She believes that’s one of her keys to success. “My advice for young people is: You can be a leader at all levels. So look for that role at your current level and in your current job. And then always look a couple of levels ahead of you and ask, what is that person doing to be successful? And start acting that way, thinking that way, planning that way—and you’ll get there before you know it.”