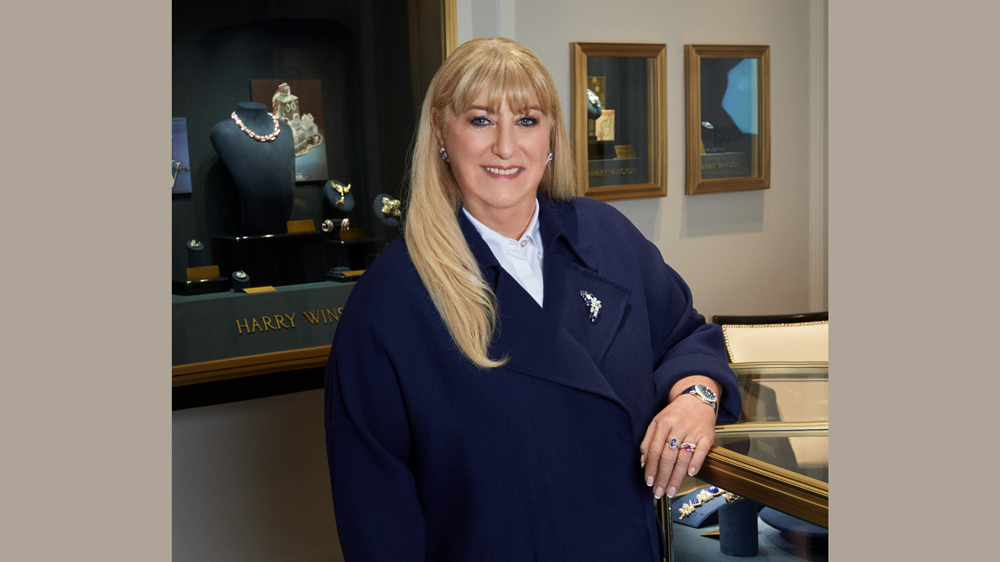 Nayla Hayek is CEO of Harry Winston Inc. and chairwoman of Swatch Group Ltd., the company founded by her father, Nicolas Hayek Sr. Here Nayla Hayek talks about leading the world’s largest watch company and what it’s like to be a woman in a largely male driven business. Her brother, Nicolas Hayek Jr., is CEO of the Swatch Group. Her son, Marc Hayek, is CEO of Breguet, Blancpain, and Jaquet Droz, all Swatch Group brands. Nayla Hayek, who has been on the board of directors of Swatch Group since 1995, was named vice-chair of the board of directors in May 2010. “I was elected vice president two years before he [her father] died. Nobody was really surprised when I took over.”

Hayek is also a horse-breeding expert, who keeps 70 Arabian horses at her farm near Zurich, Switzerland. Her private time is divided between the farm and her home near Lake Lucerne.

What is it like to be the highest-ranking woman in the watch industry?

I have had the advantage of working in a company where gender was never an issue, just as age or nationality were never issues. A journalist once said to me, ‘Do you know that Swatch Group has more women employed than men?’ I said, no I didn’t know that. We don’t count them. We just try to have the best in each position. It doesn’t count if you are a man or a woman.

Did anyone suggest that nepotism was the reason you became chairwoman?

I think some people thought, yes, it is because she is the daughter of Mr. Hayek, but this is not surprising. I think as a woman you have much more to prove. I don’t think a man would ever be as questioned in this position as a woman. But why should a woman not be able to do everything in a position that a man does? Not only will you always have to give your background, people will always talk about how you look, what is your hair color, what is the color of your eyes. Nobody says, ‘Ah, this man looked tired today or his makeup was not right.’

Did you always know you wanted to work with your father in the Swatch Group?

No. When I was younger I was very interested in archeology. I was fascinated by Egypt, and the history of pyramids. Then I married; I had my son (Mark) very young, and then the horses were always there. I had show jumping horses and I was a show jumper. I was always in the management of our family business Hayek Engineering. I’m still the president of that company. We have a lot of people from Hayek Engineering working on development projects for other Swatch Group companies.

What advice did your father give you about running the Swatch Group?

My father was not really advising in the sense that he was sitting there saying you have to do this and you have to do that. His best advice was what he did himself, things that we keep in our mind and in our hearts. One thing that was very important to him was integrity. He always said if you say something, you have to mean it. Don’t say things that are only somehow a marketing tool. Don’t say something if you know you will not do it and you will not stand behind your words. It’s easy to promise things, but you also have to make difficult decisions and be truthful about that.

Do you think there are more opportunities for women in the watch industry now?

Yes. I think so. Mr. Rupert [Johann Rupert, chairman of Richemont Group] told me he just appointed a woman as president of one of his brands. I think it’s still difficult, though. We still always have to prove we are able to do the job, so you sometimes have to be much tougher than you want to be, just to prove you are able to do the same job.

You are friends with Johann Rupert. Has he asked for your advice on this or other matters?

(Laughs). No, not really my advice. But we speak. You know, we are both in the same field. We are in competition, yes, but we are thinking about very similar issues, and don’t forget, we [Swatch Group] are suppliers to most of the brands, so we all talk together.

Tell me about your horses. How did you get into horse breeding?

I bought my first pony when I was nine years old. I was a show jumper in the beginning, but I had an accident and injured my back, so I took an interest more in the breeding side, and I fell in love with Arabian horses. I got my first Arab mare as a present from a Saudi king when I was 17 years old. Now I’ve been breeding Arabian horses for 40 years.

Do you see them often now?

Not as often as before. I am full time with the Swatch Group [Hayek became chairman of Swatch Group in 2010 and CEO of Harry Winston in 2013]. I am at the farm most weekends.

Do you sell the horses?

This is the hardest part. It is part of the business of breeding horses, but I don’t like to sell them. The most important things in my life are my family and my horses. If I did not have them I wouldn’t be able to do my work. I need them. When you have animals, they give you something—a kind of knowledge that you can use in your dealings with people. They don’t care who they are or who you are. This is important. If you have an animal and it feels sick, it can’t talk to you; and if they are in a bad mood or they are afraid of something or if they don’t want to do what you think they should do, you have to find out why. They can’t tell you. You have to develop an instinct for body language. I think this is very important if you have to deal with people. For me, I always had the feeling that the many years I’ve had horses has helped me to read people.