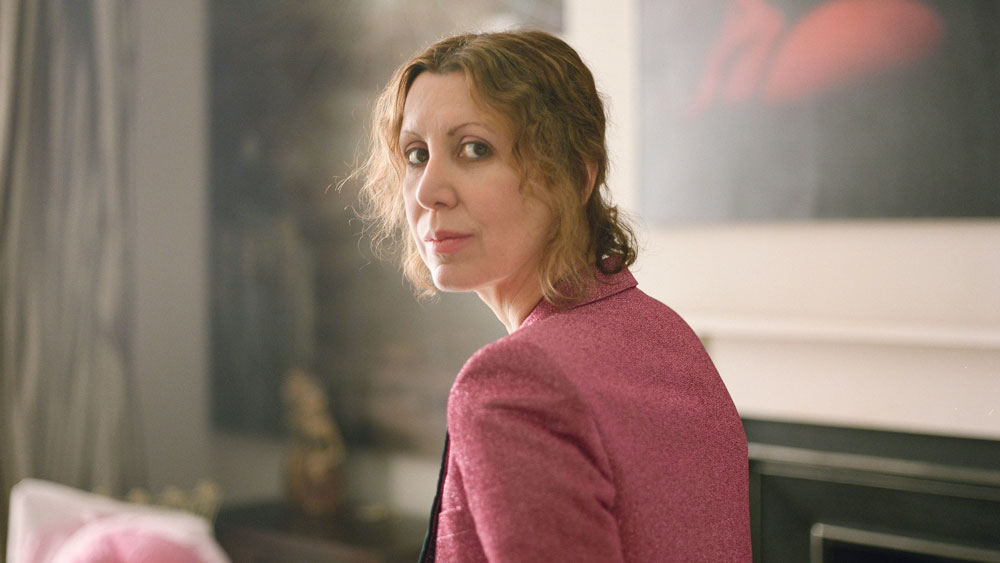 Valeria Napoleone has spent the better part of two decades pursuing a singular passion: supporting the work of female contemporary artists. “I’m not impressed by how much money people have, because there will always be someone who has more; what impresses me is talent, and I want to be surrounded by talented people,” says the Italian-born, London-based collector and philanthropist. “That is why I do what I do.”

Her aim, she says, is to begin to address the gender imbalances that pervade the art world, at least as far as individual artists are concerned. To that end, she has long championed the causes of Ghada Amer, Andrea Büttner, Nicole Eisenman, Anthea Hamilton, and Lisa Yuskavage, to name just a few of those whose careers continue to unfold to critical acclaim on the art-world stage. Collectively, she says, these talented artists represent a choir of long-needed female voices in a male-dominated cultural sphere.

The daughter of an Italian industrialist, Napoleone grew up in Busto Arsizio, some 20 miles north of Milan, where she and her twin sister, Stefania Pramma (now a handbag designer), were surrounded by Renaissance paintings and exquisite antiques. “My parents collected beautiful things,” she says, “but at the end of the day, they were just objects. When I discovered contemporary art, I thought, ‘Wow, there is no need to try and figure out what an artist’s intention might have been with regard to a painting or sculpture. I can simply ask.’ ”

To date, Napoleone has amassed some 350 works, many of which fill an apartment in London’s tony Kensington enclave, which she shares with Gregorio, a private-equity investor and her husband of 24 years, and three teenage children, Federico and twins Gregorio and Letizia. A short distance away, construction of a 7-story townhouse, with ample space for the growing art collection, is drawing to a close, slated for completion in early 2019.

Napoleone has an affinity for conceptual works that she describes as particularly “irreverent, experimental, and courageous,” which have the capacity to surprise. “If I am in front of a work and I have to convince myself that it is a good investment but I don’t react to it emotionally, I know that it is not right for me. An artist should take you on a journey that alone you would never have made.”

The German-born artist Andrea Büttner is a case in point. Napoleone discovered Büttner shortly before serving as a jurist for the Max Mara Art Prize for Women in 2011. “Her work really forces you out of your comfort zone, which is what I look for in art. If I am drawn to a work but I don’t fully grasp it, it means I have room to grow emotionally.” Napoleone’s prescience as a discoverer of talent is also evinced by Büttner, who at age 45 was short-listed for the coveted Turner Prize in 2017.  “When you are exposed to such talent and ideas,” says Napoleone, “it’s not only a journey of personal growth, but also a journey taken with like-minded people—people I call my soul family—that one finds on one’s path in life.”

In many ways, Napoleone sees herself as a much-needed fairy godmother, nourishing artists not only financially but literally, often preparing sumptuous home-cooked dinners for them, as well as for curators, gallerists, and fellow patrons. This support, she says, is far outweighed by the intellectual joy she receives in return. Napoleone has also worked to rally support for independent galleries, the incubators for artists of the future. So many galleries, she says, have closed in the past two years, eliminating vital nodes in the art-world ecosystem.

It is no secret that there is a major gender gap in the art world. According to a 2017 report by the Association of Art Museum Directors, 70 percent of museums with annual budgets of $15 million or more are run by men, with female representation decreasing dramatically as a function of an increase in budget size. Moreover, those few female directors who do helm larger institutions tend to earn 75 cents for every dollar paid to a male counterpart. And when it comes to artists themselves, the disparity in prices achieved for works at auction is far greater. Georgia O’Keeffe’s Jimson Weed, White Flower No. 1 (1932) commanded $44.4 million at Sotheby’s New York in November 2014—setting not only an artist record at auction but a record for any work by a female artist on the block. An impressive figure perhaps, but it is interesting to note that paintings by Pablo Picasso command more than twice that on a regular basis.

A trio of untitled works by Monika Baer from 2009 (above right).  Photo: Courtesy Laura Hynd

“If women artists wanted money, they wouldn’t be doing what they’re doing,” says Napoleone. “And if I wanted to speculate on the art market, I certainly would not be buying works by young underrepresented female artists. Nonetheless, they are beginning to achieve great things from a curatorial perspective, and for me that is what is important and that is what I hope to facilitate.”

In 2015, Napoleone launched the XX initiative—the double X representing the pair of female chromosomes—to address the underrepresentation of female artists in public museums and exhibition spaces. Through XX, Napoleone has partnered with the Contemporary Art Society in London and the SculptureCenter in New York. The mandate of XX is to raise funds for the purchase of important works by women on behalf of regional institutions on both sides of the Atlantic, and to fund ambitious projects by female artists.

Napoleone’s being front and center in this effort means her family is exposed on a daily basis to politically and in a few cases sexually charged works of art, especially in this age of the MeToo movement. When asked about their reaction, Napoleone says, “My children have been surrounded by challenging pieces by these talented artists since birth, and I have never insisted that they embrace them as I have. If nothing more, I hope that by living with them, their brains will have expanded in a way that allows for a lot of possibilities, and that they come away with an appreciation for what artists do: Artists forge their own paths in life, refusing to walk in other people’s shoes.”