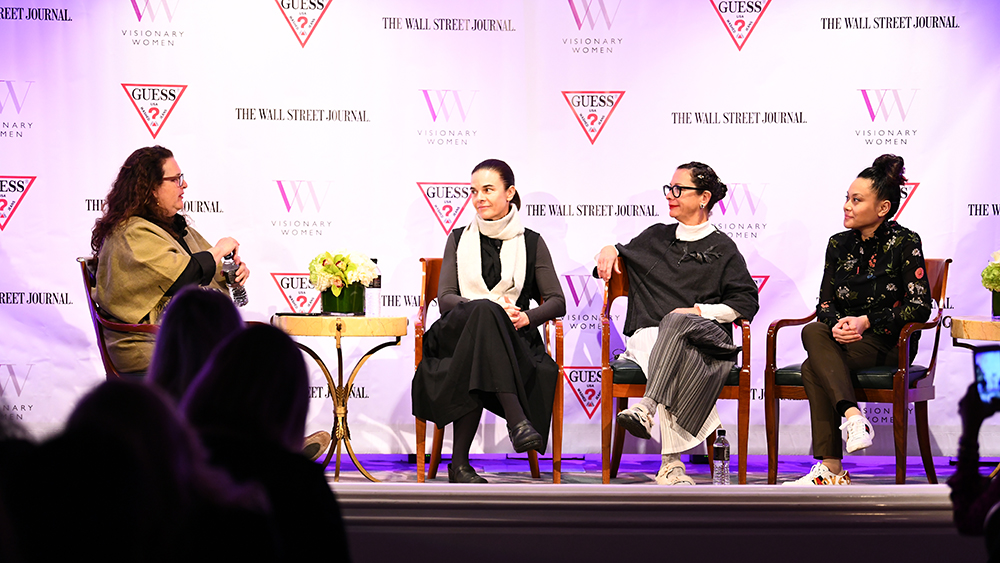 “If you have five hours a week to spend doing something that’s beyond yourself, what would it look like?” asks Angella Nazarian. For Nazarian, a bestselling author and public speaker, that time has added up to Visionary Women, a Los Angeles–based non-profit organization she founded in 2015 alongside entertainment executive Shelly Reid and Lili Bosse, the former mayor of Beverly Hills. To date the three have recruited more than 200 of the most influential women in LA to devote their slivers of free time to the organization, which through annual fundraising and speaker events has raised well over half a million dollars for organizations like the National Women’s Law Center, Planned Parenthood, and Time’s Up.

Both Nazarian and Reid are quick to highlight that Visionary Women is not your average ladies-who-lunch philanthropic endeavor. Instead, the two, along with their board of directors, have modeled themselves after the likes of Catherine de Vivonne, the marquise de Rambouillet whose famous chambre bleue launched French salon society in the early 17th century, giving members special access into some of the world’s leading minds (hence the “visionary” in Visionary Women). Past events have included Indian spiritual leader and motivational speaker Sadhguru and Nobel Peace Laureate Leymah Gbowee, who discuss the topics impacting women today.

In honor of their February 6 salon centered around female power chefs, which featured the likes of Osteria Mozza’s chef Nancy Silverton and restaurateur Suzanne Goin, Muse asked Nazarian and Reid to break down how they carved time out of their already-packed schedules to launch Visionary Women, what has made the organization such a success, and how to kick off your own passion project.

Why do you think Visionary Women has taken off in the way that it has over the past four years?

SR: I am convinced our incredible success and unanticipated quick growth is because of our culture. We were very, very careful about making sure this is a welcoming place, one that is not just for women who lunch. This is a sisterhood. It is about discussing issues that are important to all of us, and [it’s about] getting people to be engaged and active. We even closed our membership for a brief period last spring because we found that we had so many new members, and we didn’t want people just paying their dues and not feeling really connected to the rest of the group. I know it is an overused term, but at the bottom line, there is a community here.

AN: I think both Shelley, Lili, and I felt that [this kind of community] was really lacking here in Los Angeles. To be able to create a space where women could learn together and join our voices to really change major things in our city and worldwide has been really energizing. It’s really a privilege to get to do that.

Was cultivating this culture something you did consciously?

AN: Absolutely. I think that you always try to envision what the new model for a nonprofit will be. I wanted to create one that is not based on gala dinners or luncheons because none of us really need to be invited to another dinner. We want to spend our time learning from other people and putting our money toward their very specific causes.

SR: That is why our Salon Series is so important. We are really committed to having the best minds and the best speakers, whatever the subject matter may be.

How do you track down speakers as diverse as Sadhguru and Demi Moore?

SR: Don’t talk to us at cocktail parties! Ha!

AN: The first lesson we’ve learned is don’t be afraid to ask. We also have a very strong and well-connected board of advisors who can reach out to personalities and thought leaders through their networks as well.

You pull in some top-level sponsors to support your Salon events. How did you go about creating positive relationships with brands like Cartier and Valentino?

SR: What we discovered is that with our relationships and friendships, [Visionary Women] represents exactly the kind of group and audience that these retailers want to get in front of.

AN: There isn’t a retailer out there that doesn’t have some kind of women’s initiative, so we represent a great way for brands like David Yurman, Vhernier, and Cartier to get more involved in the community. For example, Cartier is set to sponsor our International Day of the Woman award in March for the third time, and we couldn’t be more thrilled.

Why have you made such an effort to include young women in your organization?

AN: I think we’ve seen this huge growth because [Visionary Women] is a great platform for young women. These organizations succeed when things are intergenerational and when the conversation is not only among women who are successful, but those who are aspiring.

SR: Exactly. I’ve always been pretty clear that we want to give the Under 35 group guidance but not micromanage them. They are going to find their own voice and their own way, which is really important to us. It’s all about succession and the next generation of leadership.

What advice would you have for women looking to start organizations like Visionary Women in their own cities?

AN: I always say you are the sum total of the five people you spend the most time with. So, I think that with any project that you start, you need to choose who you want to be working with. Second, you need to have a passion for what you’ve set out to do. When you have that, work doesn’t feel like work.

SR: Passion just makes an organization like this something that you do. It allows it to become part of your fabric, the extra work and obligations. It just becomes part of your rhythm because you’re really happy with the results. I also think it is important for [women looking to found a philanthropic organization] to see what is lacking in their communities, and how they think they can fill that gap. Think about how you can be a solution to something.