From Rio de Janeiro, Mercado Moderno will bring a collection of iconic Brazilian seating to Design Miami. Chief among them is the Flama chair, an early unique work by the Campana brothers. It looks forbidding and maybe a bit spindly, but don’t worry—it can hold your weight. It’s made from iron. You won’t want to sit for very long, however. Flama was part of the brothers’ debut exhibit, held in 1989 in São Paulo and dubbed Desconfortaveis, which translates to “uncomfortable.” “Their first exhibit was very important because they were experimenting,” says gallery cofounder Marcelo Vasconcellos. “They were working with very raw pieces of iron and this experience helped them get the know-how for making other pieces later.” 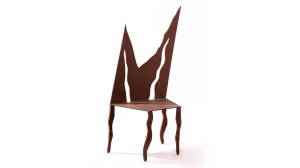 Issa Rae Partners With Lifewtr to Launch Life Unseen, a Platform for Fair Representation in the Arts

Survey: 39% of Americans Say Netflix Has Best Original Content of All Streaming Services

May Stevens, Ardent Feminist and Founding Guerrilla Girls Member, Insisted That All Painting Is Political