Krynauw first created the Jepperstown Waiting Bench, which explored and celebrated the bustling nature of the Jepperstown section of downtown Johnannesburg while providing comfort to its commuters and city dwellers. Then he gave his idea a more playful spin. The Jepperstown Play Bench is a limited edition of five. It seats 12, but admittedly not at the same time. It is practical in at least one respect—it doesn’t weigh all that much. “It’s light, but it’s incredibly robust and strong,” says Trevyn McGowan, cofounder of the South African gallery, which has locations in Cape Town and Johannesburg. “You and I could lift it together.” 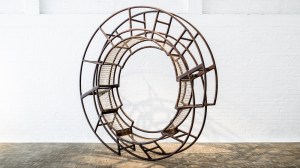