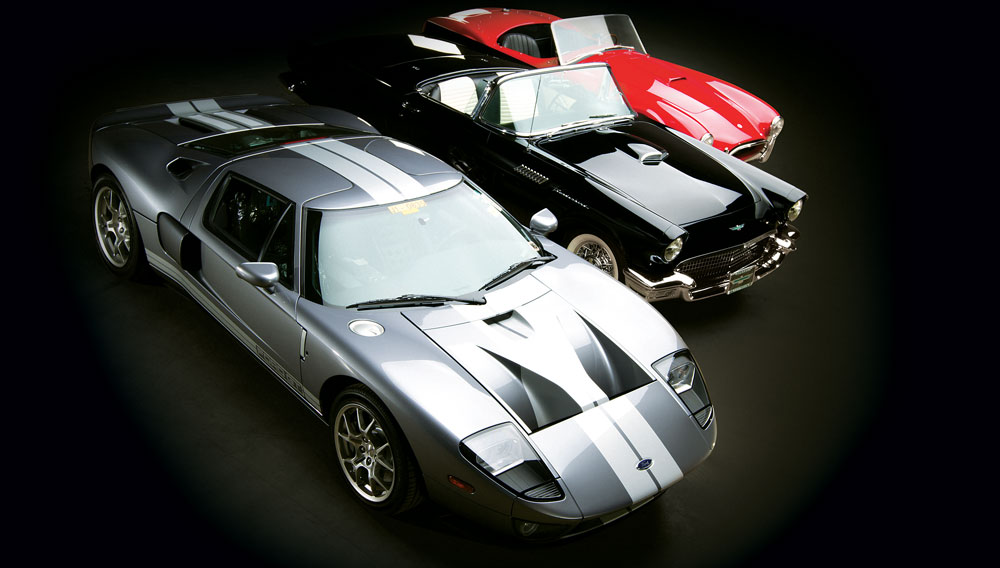 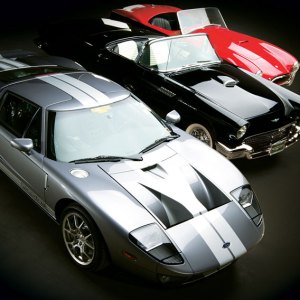 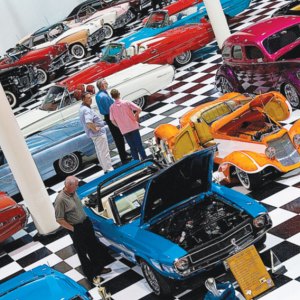 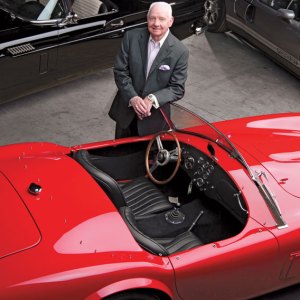 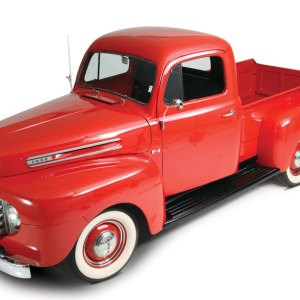 A light mist falls from low gray clouds, but inside Sam Pack’s private car museum in Dallas, it is as bright as if the sun blazed above. Mustangs, Bel Airs, Thunderbirds, Cobras, and dozens more shine under the overhead lights. A man feather-dusts them, though there is not a speck of dirt in the place.

Pack, a Dallas-area Ford dealer, has a staggering personal collection of cars: 500 fill this museum and three other facilities around the city. His collection is so big it defies categorization, though there is a heavy influence of American cars from the 1950s, particularly Fords and Chevys. He owns 40 marques ranging from A (American Bantam) to Z (Zephyr). He has racecars and pace cars, customs and concepts, Pontiacs, Pierce-Arrows, Plymouths, and Porsches. His cars date from a 1912 Ford Model T to a 2015 Ford Mustang—he was scheduled to receive the first one off the assembly line this year.

Pack employs five people whose sole job is to maintain the cars. But now the moment every collector dreads has come: His collection has gotten too big to handle, and it is time for Pack to cut back. Making the initial decision to cull his collection was extremely difficult. Deciding what to sell—130 cars, and counting—has not been much easier, a fact that became crystal clear as Pack toured his collection.

With white hair, a ready smile, and cuff links shaped like 1957 Ford Thunderbirds, Pack, 77, is an engaging guide. He grew up in Stephenville, Texas, in the golden age of the auto industry, and he loved cars as a kid. “It’s in my DNA,” he says.

Around age 20, he began trading them. For years, his collection consisted of two cars: a 1966 Ford Galaxie and a 1964 Thunderbird. Then 12 years ago, the size of his collection exploded: The fuse was lit by a 1939 Ford Deluxe two-door convertible coupe, which Pack coveted for its iconic look and its historic significance—it was the last year of the rumble seat and the first year of hydraulic brakes.

“I had looked and looked and looked and could not find one that would please me,” he says. After two years of hunting for the car, Pack was at an auction in Dallas when he ran into a friend who had a friend who had a perfect 1939 Ford in his collection. Pack bought it, plus two other cars from that era. Those three were quickly followed by the purchase of 10 more at auction. “From there on, it was a buying spree,” he says. He laughs when asked how he went from two to 500 so quickly.

“That’s a great question,” he says. “I would just say I was bitten by the bug.”

He had always been passionate about cars, but suddenly he had unlocked a desire to build an exquisite collection. At first, he collected only Fords, but once he decided to open a museum he expanded his collection’s scope. But when he adds, “I’ve overdone it,” he means it. He plans to winnow his collection to about 250 by selling more than 130 cars through RM Auctions in November and an additional 100 in a second sale, though details of that have not been released. He will consolidate the rest into two private museums, which will be next to each other in Dallas. Then he will continue collecting cars, but he insists that he will sell as many as he buys.

Ian Kelleher, the RM sales manager who is working with Pack, has seen big collections before, but never one where so many cars are so remarkable. “I’ve never seen a collection of this magnitude at this level of quality,” he says. Pack has made and remade his “sell list,” adding and subtracting cars as he wrestles with himself over what to keep. “I change my mind every time I go through it,” he says.

Only a few cars were relatively easy to let go: One of them is a DeLorean. He bought it because of its collectibility, not because he particularly wanted it—a rare decision on his part. So that is on the sell list. And even that was not a decision he made with 100 percent confidence.

Pack also wants to maintain variety, so many of the cars he has decided to sell are duplicates. For example, his collection includes more than 30 Ford Thunderbirds and 30 Chevrolet Bel Airs, plus a dozen Corvettes and seven Shelby Cobras. Eliminating duplication makes his decisions somewhat easier; he is having a hard time coming up with reasons on his own. “If I didn’t have a specific objective, I wouldn’t get rid of any of them,” he says.

Painted to look like a 1950s diner with a seating area to match, the Pack Automotive Museum holds about 100 of his cars. It is open for free to charitable organizations, which use it often for fund-raisers. Pack’s daily driver is a Ford Expedition—he does not drive any of the cars in his collection. “Most of these cars are show cars. The last thing you want to do is get them out in Dallas traffic,” he says. He thinks on that topic for a second, like a car idling at a light. “It would be a lot of fun, but not something we would want to do.”

As Pack walks around the cars in his museum—he will keep all 100 of them—the first one that jumps out is the Silver Bullet, the 12th of 40 Shelby Cobras made to commemorate the 40th anniversary of the Shelby program. The only Cobra with a hand-polished aluminum body, its skin glows like liquid metal, like if you touched it, it would absorb you. The famed designer Carroll Shelby signed his name using silver ink on the black glove compartment. The car’s 462 cu in engine generates 550 hp, and a matching guitar that goes with the car creates equally beautiful music. Pack smiles. “It’s an incredible car,” he says.

The Silver Bullet is a convertible, as are many of the cars in Pack’s collection—a nod to his youth. Pack stops in front of another convertible—a 1957 Chevy Bel Air, a car as blue as the summer sky and one of his favorites. He bought it from a man in Tennessee who worked so diligently to restore it that he insisted he drop it off himself. One of Pack’s employees greeted the man and asked him to put the top down. The man refused. Mr. Pack likes to have the top down, the employee insisted. Still, the man would not do it. With the top up, he explained, the car received the prestigious 1,000-point restoration rating from Classic Chevy International. If he put the top down, it would wrinkle, and good-bye 1,000, hello 999. That ’57 Chevy is one of very few convertibles in Pack’s collection with its top up.

Nearby sits a 1953 Ford Vega roadster, a one-of-one concept car also known as the Vince Gardner Special, whose history is recounted on a display in Pack’s museum. In 1950, Gardner won a design contest sponsored by Ford, which came with $500 for financing. Gardner knew that was not enough, so he showed up at Ford headquarters and talked Henry Ford II into giving him $8,000 more. It was money well spent. A convertible, the Vega is silver and snug, with round curves up front that make it look like a four-wheeled recliner. Although the Vega roadster never went into production, it inspired one of Pack’s favorite cars, the Ford Thunderbird.

As Pack walks through his museum and warehouse, he talks about each car. There’s a 1940 Lincoln-Zephyr Continental once owned by Babe Ruth, a “Shaguar” from the Austin Powers spy-spoof movies, and another Shelby Cobra, a Dragonsnake racecar. It was buried in a previous owner’s basement for 15 years before being rediscovered and restored.

It was pristine when Pack bought it, as is the case with nearly every car he owns. Over and over again, Pack calls attention to intricate details, caressing spotless interiors, tracing with his finger a painted stripe that continues inside a door, and pointing to chrome that winks like a flirt.

One of the last cars he points out is an immaculate red pickup, a 1948 Ford, the first F-series model. A 66-year-old pickup might seem like an odd draw for his enthusiasm, but Pack looks at it this way: Hundreds of thousands of Americans have based their livelihoods on using F-series trucks, and this model started it all. He knocks on the truck’s hood, as if he is patting a man on the back after a hard day’s work. “This,” Pack says, “is the one I tell people we should bow to.”

Head of the Pack

“We’re talking about more than just a car here,” Pack says of this Carroll Shelby design. “We’re talking about a car that rewrote the chapters of history at that time. If I didn’t have other Cobras, this car would not be sold.” Jacque Passino, who ran Ford’s racing division, once owned this vehicle. Estimate: $900,000 to $1,100,000.

This car has only 11 miles on it—“still in the wrappers,” as Pack puts it. “I’m going to kick myself for selling the GT.” But then again, he owns a 2005 GT, too. “I serve on Ford Motor Company’s North American product development team. We were very involved in bringing that car to market. To me, the car’s execution overall was outstanding.” Estimate: $300,00-plus.